OOPS Concepts In Java with Examples 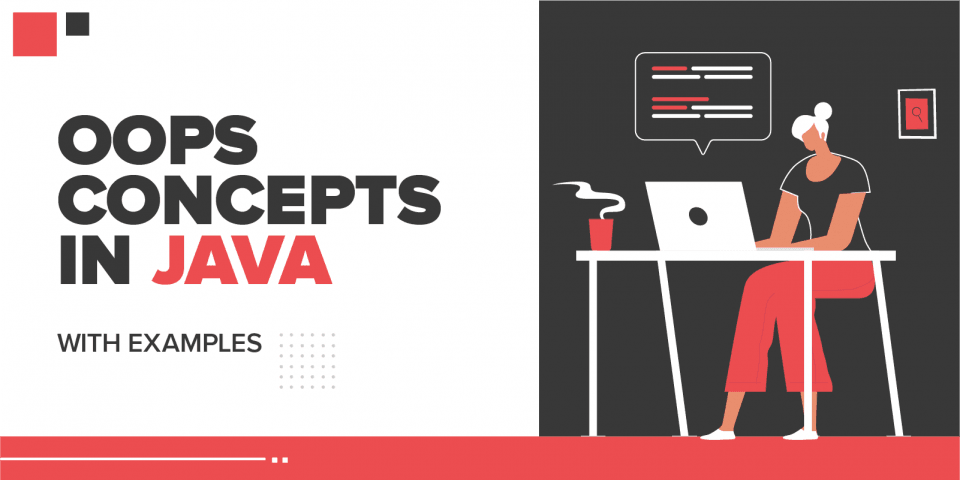 Object-oriented programming is an approach to development and an organization that attempts to eliminate some of the flaws of conventional programming methods by incorporating the best of structured programming features with several new concepts. It involves new ways of organizing and developing programs and does not a concern using a particular language. Languages supporting OOP features include Smalltalk, Objective C, C++, Ada, Pascal, and Java.

Definition of OOPS Concepts in Java

So we can define OOP programming as:

“Object-oriented programming is an approach that modularizes programs by creating a partitioned memory area for both functions and data that can be used as templates for creating copies of such modules on demand.”

The primary objective of the object-oriented approach is to eliminate some of the pitfalls that exist in the procedural approach. OOP treats data as an element in the program, not allowing it to flow around the system freely. It ties data closely to the functions that operate on it and protects it from unintentional modification by other existing functions. OOPS allows decomposing a problem into several entities called Objects and then build data and functions from these entities. The combination of the data makes up an object. Some features of object-oriented programming in java are:

General OOPS concepts in Java are:

Objects are runtime entities in an object-oriented system. An object can represent a person, a bank account, a place, a table of data. It may also represent user-defined data types like lists and vectors. Any programming problem is analyzed based on objects and how they communicate amongst themselves. The objects interact with each other by sending messages to one another when a program is executed. For Example, ‘customer’ and ‘account’ are two objects that may send a message to the account object requesting for the balance. Each object contains code and data to manipulate the data. Objects can even interact without knowing the details of each other’s code or data.

The entire set of code and data of an object can be made user-defined data type using the concept of the class. A class is a ‘data-type’ and an object as a ‘variable’ of that type. Any number of objects can be created after a class is created.

The collection of objects of similar types is termed as a class. For Example, apple, orange, and mango are the objects of the class Fruit. Classes behave like built-in data types of a programming language but are user-defined data types. Representation of an Object

The wrapping up of the data and methods into the single unit is known as encapsulation. The data is accessible only to those methods, which are wrapped in the class, and not to the outside world. This insulation of data from the direct access of the program is called data hiding. Encapsulation of the object makes it possible for the objects to be treated like ‘black boxes’ that perform a specific task without any concern for internal implementation.

Abstraction is the act of reducing programming complexity by representing essential features without including the background explanations or details. Classes are the concept of abstraction and are defined as the list of abstract attributes such as size, weight, cost, and methods that operate on these attributes. Classes wrap or encapsulate all the essential properties of the objects that are to be created.

The code below shows an example of abstraction.

Inheritance is the process by which objects of one class acquire some properties of objects of another class. Inheritance supports the concept of hierarchical classification. For Example, a bird Robin is part of the class, not a mammal, which is again a part of the class Animal. The principle behind this division is that each subclass shares common characteristics from the class from its parent class. In OOP, the idea of inheritance provides the concept of reusability. It means that we can add additional features to parent class without modification; this is possible by deriving a new class from the parent class. The new class consists of the combined features from both the classes. In Java, the derived class is also known as the subclass.

The code below illustrates an example of Inheritance.

The figure below demonstrates that a single function name can be used to handle the different numbers and different types of arguments. In polymorphism, objects having different internal structures can share the same external interface; it means that a class of operation may be accessed in the same manner even though actions with each operation may differ. Inheritance extensively uses the concept of polymorphism.

Polymorphism can be achieved in two ways:

It is possible to create methods with the same name but different parameter lists and different definitions. This is called method overloading. Method overloading is required when objects are required to perform similar tasks but using different input parameters. When we call a method in an object, Java matches up the method name first and then the number and type of parameters to decide which definition to execute.

The code below demonstrates the concept of method overloading.

The code below demonstrates the concept of method overriding.

Objects communicate with each other in OOPs The process of programming in case of OOP consists of the following:

The network of Objects Communicating with Each Other Specifying the object name, the method name, and the information to be sent is involved in message passing.

For Example, consider the statement. Objects can be created or destroyed as they have a life cycle. It allows communication between the objects until the objects are alive.

Benefits of OOPs Concept in Java

Applications of OOPs Concept in Java

Java is a robust and scalable object-oriented programming language that is based on the concept of objects and classes. It offers features like inheritance, abstraction, encapsulation, and polymorphism for developing an efficient and reliable code.

What is a real-time example of abstraction?

Can we override the static method?

What is the purpose of Oops?

What is the difference between inheritance and polymorphism?

Why do we use OOPS concepts in Java?