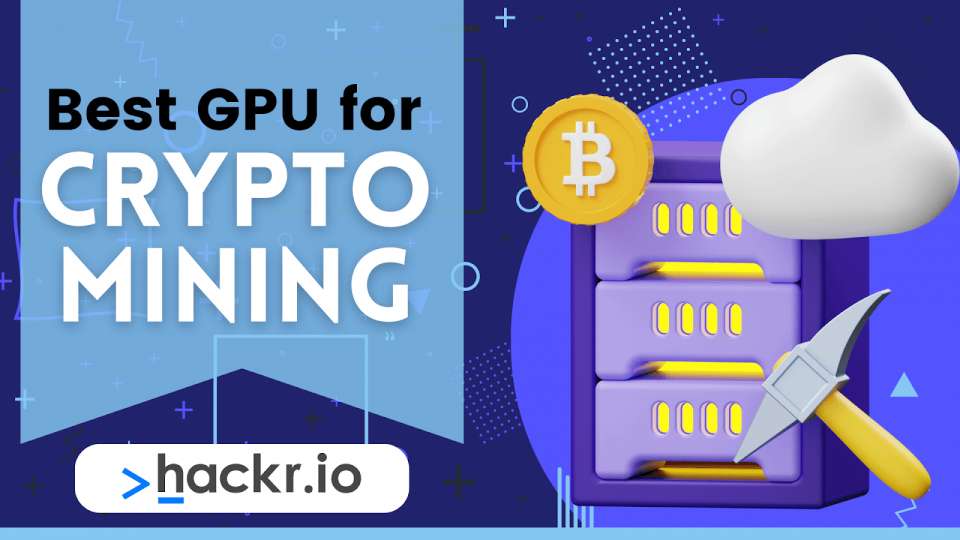 Today, we’ll take a deep dive into what makes a GPU great for mining, which GPUs are best, and how you can start mining crypto now.

Note: Don’t build that Ethereum mining rig just yet. Even the best GPU for mining 2022 isn’t going to help you with coins that aren’t (or are no longer) proof of work. Bitcoin (BTC) and Dogecoin (DOGE) are two coins that you can mine. Before, you could mine Ethereum — but not anymore.

Why Do You Need a GPU for Mining?

In the early days of mining cryptocurrency, we actually relied on processing power. We used CPUs to solve mathematics problems that “discovered” tokens. But then we realized that CPUs aren’t great at that type of math. Even a cheap mining GPU outpaces an expensive CPU because GPUs are meant for that type of heavy algorithmic lifting.

Today, no one uses processors for mining — it’s video cards all the way. But there are hundreds of video cards for mining to choose from. And up until recently? It was hard to find a GPU for mining because they sold out so fast.

What are the 3 Best GPUs for Mining?

These cards produce value: they’re not that expensive, mine quickly, and are (sometimes) available.

Considering a cheap GPU for mining? Or are you on the hunt for the best mining GPU money can buy? Keep reading!

Overview: The Best GPUs for Mining

As you review these numbers, note that crypto has crashed considerably throughout 2022. Mining BTC is going to make you pennies a day on most cards – but the idea is that if you make enough of those pennies, someday, those pennies will be dollars.

The RTX 3060 TI knocks most other video cards out of the park -– and it’s really not that expensive. Built for gaming, the RTX 3060 TI uses GDDR6 RAM and PCI Express 4.0 graphics. It’s a lightning-fast card used for more than just mining.

❌ Not really available on the new market.

For the money, the performance of the GeForce RTX 2070 isn’t that exciting. But it makes up for it in availability. It’s a relatively solid card that yields pretty decent results — even better if you can get it on sale.

✅ A mid-range card that delivers a solid performance. Not the Best, Not the Worst

As we reach “4” on our list, we start to approach even better cards. The AMD Radeon is a little too expensive to be a true contender to our top 3, with performance that merits a “meh.” But Radeon cards tend to go on sale more — so that “meh” could turn into an “eh?”

✅ Solid performance for a mid-level card.

✅ May be slightly more available than other cards.

❌ Doesn’t have astonishing performance for the money.

For Those With Money to Burn

The GeForce RTX 3090 is an expensive card. It mines twice as fast as most other cards, but it’s also three times more expensive. So, it’s a great card if you get a discount or if you upgraded your computer and it’s just lying around — but it’s not a great choice for your server farm.

✅ Probably one of the best cards you can buy.

✅ Will definitely produce a lot of crypto fast.

❌ It’s still so expensive that the cost-effectiveness isn’t there.

It is the lower tiers where Radeon tends to shine. This doesn’t produce as much value as even cheaper cards on this list, but Radeon cards (especially budget cards) tend to be more available. Sometimes it’s less the card you want and more the card you can get.

❌ Watch out for the manufacturer and specs — it really matters here.

Outpaced By Its Sibling

The RX 570 is, in no way, better than the RX 580. It isn’t cost-effective or fast. It’s a good deal if it’s something you already have around. It’s solid, but it just doesn’t keep up with the others.

❌ Watch out for the manufacturer and specs — it matters more for budget cards.

Finally, we have the GeForce RTX 1080. This is a great card in terms of speed. If you have a bunch lying around on discount, go for it. The problem is that the MSRP does tend to be quite high; you need to find these for resale.

❌ The cost value isn’t there unless you can get it cheap.

So, What Makes a Good GPU for Mining?

As you can see above, a combination of performance and cost makes a good GPU for mining.

Want To Learn More About Mining? Check Out This Course

Learn How to Build a Cryptocurrency Mining Computer

How to Choose a Graphics Card for Mining

Now that we’ve covered the easy stuff, let’s discuss a few other issues when choosing a graphics card.

Graphics cards are like cars. They come with different trim levels. Let’s say you want an NVIDIA GeForce RTX 3060 TI. NVIDIA is the company that creates the chip. GeForce RTX is the make and model of the chip. And TI is a trim level — you won’t get the same performance from an RTX 3060 as you will from a 3060 TI. This comparison from UserBenchmark shows how significantly the TI version outperforms the non-TI version.

When you choose a graphics card, you’re also choosing a:

So, unfortunately, because of these “trim levels,” it’s not always easy to choose the right mining GPU even if you know exactly which chip you want.

How to Find a Graphics Card Cheap

With ETH moving from proof of work to proof of stake, graphics cards have dropped tremendously. The best places to look for cheap graphics cards are secondary sellers: used video cards on Amazon and eBay. You don’t need a new graphics card for mining, you just need one that works. People trade out their graphics cards all the time for best-in-class gaming technologies.

Alternatives to Buying a GPU for Mining

You might have noticed that even on our chart, the best GPU for mining isn’t really profitable. But that can be a little misleading.

What makes mining so expensive?

Many people don’t mine with their own GPUs because of the above. Instead, they’ve started mining on cloud instances or hosted servers. They don’t need to purchase a bunch of mining equipment upfront, and they don’t have to keep it in their house (or pay for that electricity).

Conclusion: What’s the Best GPU for Mining in 2022?

So, you can buy the best GPU for mining and start mining Bitcoin — or an altcoin — immediately. But those quick financial gains aren’t all that the blockchain is good for Now that you know how you can start mining, find out more about the blockchain below:

1. What is the Most Effective GPU for Mining?

In short, the most effective GPU for mining is the one that can solve mining problems fastest… and is the most cost-effective solution. As of September 2022, the best GPU for mining is likely The NVIDIA GeForce RTX 3060 Ti. There are more powerful cards, but they are prohibitively expensive. Mining is, at its heart, a financial enterprise.

2. What GPU is Needed for Mining?

At least an equivalent of a GTX 1070 should be used for mining, but the interesting thing about GPUs is that because of the way that the work is “done,” you can’t always anticipate which card will be great for mining. A $2,000 card may be okay, and a $500 may be amazing depending on the engines inside of the card itself – e.g., cards with ray tracing tend to be exceptionally powerful.

3. Which GPU is Best for ETH Mining?

Unfortunately, you can no longer mine Ethereum. Ethereum switched to proof-of-stake from proof-of-work on September 15, 2022.

Mining will absolutely destroy a GPU. It’s the equivalent of running a very resource-intensive game 24/7. Most GPUs will last in a computer for up to a decade, even if it’s not running top-of-the-line games after all that time. A GPU usually won’t last for mining for longer than a few years. But you can make a lot of money in that time.

5. How Long Will a Mining GPU Last?

How long a mining GPU lasts depends on a few factors. Foremost, there’s the challenge — Bitcoin is very hard to mine, but some altcoins aren’t. Second, there’s the heat and the environment. A mining GPU exposed to a lot of heat and dust may break down in a week. Finally, there’s the GPU itself: Some are tougher than others. A good GPU should last at least three years.

6. How Many GPUs Should I Use to Mine?

That really depends on you. Some people make a rack of thousands of GPUs within a data center. Others have one, two, or a dozen. If you’re mining Bitcoin, you will need hundreds of GPUs; the difficulty has increased.

7. How Do You Optimize Graphics Cards for Mining?

Most graphics cards today come with built-in BIOS systems that allow for overclocking. Other than overclocking the graphics card itself, it’s environmental; there’s a reason many miners prefer open-air installations in egg crates over fancy cases.

The 24 Best Books on Cryptocurrency: Learn Crypto in 2022
Read More