Getting Started with Web3 Development (click.linksynergy.com)


What is Web3? Ultimate Guide to the Decentralized Web 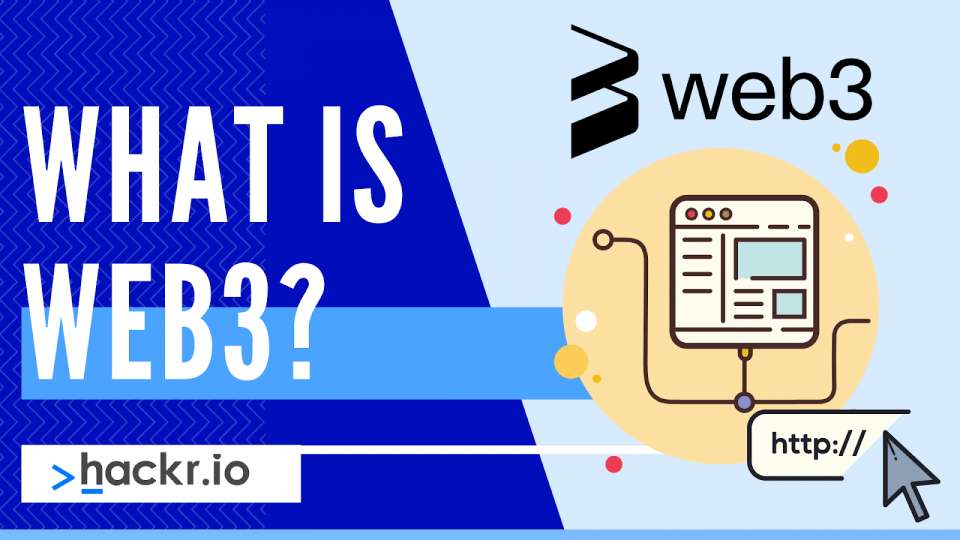 You’ve heard about “Web3” and how it’s the future of the web — perhaps even the future of society. But what is Web3? Is it worth all the fuss?

Web3 isn’t a specific technology. Rather, it’s a way of looking at the internet and how we interact with it. Web3 looks at the future’s technologies and principles as we further integrate the online world with the physical one.

Mixed into Web3 is the Web 3.0 blockchain (including Web3 crypto), NFTs, and the Metaverse. As you read this article, keep in mind that “Web 3.0” is not a universal concept; no authority can define “Web 3.0.” The internet is constantly evolving and what we understand and know about it will change.

Tim Berners-Lee first created the World Wide Web (WWW) in 1989. Since then, it’s seen an extraordinary amount of change. It began as nothing more than minimally formatted text and hyperlinks. As internet speeds became faster (and the world became more sophisticated), the web has morphed into what it is today.

In the early days of the web, websites were mostly static. The content was served from a single server—sometimes not even a server in a server farm, but just a server that a business had physically in their offices. Some pages were dynamic; these were built with SSI and CGI. Pages were largely formatted using tables and frames.

Culturally, the internet was a distinct and different world from “real life.” Most people tried their best to remain anonymous online. They didn’t connect their real life with their online personas unless they couldn’t avoid it. While some businesses did do business online, it was still rare. Only the largest of enterprises really had a strong web presence. We can’t argue that the internet hasn’t changed since 2005. But a cultural shift in 2005 radically changed the way we viewed and used the internet. A combination of adoption and improved internet speeds made the internet fundamentally more connected to the real world.

The web became less static and more dynamic. More businesses started using the internet. The rise of social media connected “IRL” (in real life) identities with online identities. We began to integrate the internet more into our society.

The Core Principles of Web3

Like Web 1.0 and Web 2.0, Web3 is a mix of philosophies, principles, and technologies.

Web 2.0 saw a significant consolidation of the internet under “big brands” such as Amazon and Google. Web3 is idealized as a decentralized internet — an internet that is scalable, private, secure and, (perhaps most importantly), peer-to-peer. Technologies associated with Web3 include NFT and cryptocurrencies.

On a broader level, Web3 sees the expansion of the internet even further into daily life. “Metaverse” technologies, virtual reality, augmented reality, and even MMO games are typical of Web3 — technologies that blur the line between “real life” and the “internet” even more than Web 2.0.

Why is Web3 important?

Web3 is important for a few major reasons. First, economic reasons. Web3 involves numerous high-profile technologies and (in some ways) recalls the DotCom bubble. For a few years, all anyone had to do to whip up Series A funding was to mention “crypto.”

Second, Web3 addresses issues with the current internet — largely that it is controlled by large corporations that may not have the user’s best interests in mind.

Finally, Web3 acknowledges an already-occurring societal shift: the blurring lines between the internet and “real life.”

Not everyone likes Web3 or even believes that Web3is a thing. Web3 has been called a “buzzword” by people like Jack Dorsey. Since Web3 isn’t a strictly delineated concept, anything can be called “Web3” given the right justification.

Some Web3 technologies like cryptocurrency seem to be increasing the class divide. True decentralization has not been achieved. And you have large companies like Facebook pursuing concepts such as the “Metaverse” (and copyright protected).

Others still believe in the concept of Web3 but question whether its current vanguards (blockchain, NFTs, and the Metaverse) are worthy technologies.

But that isn’t an argument against Web3. That is an argument that blockchain, NFTs, and the Metaverse, may not be philosophically Web3 technologies.

Web3: Blockchain, NFTs, and the Metaverse There are many implications that Web3 infrastructure will relate to blockchain technology, cryptocurrency, NFTs, and the Metaverse. Presently, regulations are changing how we view these technologies and the place they will have in our world.

You may have heard that nearly anything can be run on the blockchain. While that’s true because the “blockchain” is actually a fundamentally simpler technology than most people believe. The “blockchain” is a visible, transparent, peer-to-peer ledger system. Its flaws are primarily due to implementation, rather than its technology.

Cryptocurrencies use tokens transferred through the blockchain. The goal of cryptocurrency is true, worldwide decentralization: a currency held by and verified by everyone at the same time.

NFTs are like cryptocurrencies, but instead of crypto tokens, anything can be traded through an NFT. There are NFTs for art and NFTs for legal contracts. Because blockchain is a ledger system, an “NFT” (non-fungible token) can really be any discrete transactional object. Once again, the goal is to create a decentralized, peer-to-peer solution for recording transactions.

Some common Web3 cryptocurrencies apps include:

The “Metaverse” has become synonymous with Facebook, but it’s been a concept for a long time. The idea of the Metaverse is simply a digital world that interacts with our own. As virtual and augmented reality have become reality, rather than science-fiction, we have incrementally edged closer and closer to the “Metaverse.”

A move toward VR and AR indicates that we may very well be moving toward a digital Golden Age, in which web properties will start to move to fully interactable, 3D worlds. We are not quite there yet, but many companies are exploring what it would look like, for instance, to be in a virtual reality mall. You can already view VR museums and zoos.

The “Metaverse” is really just a matter of time, and the technologies involved are constantly advancing.

How to Get Involved in Web3

You might read about Web3 with a skeptical lens. There is a reason why some tech magnates, like Elon Musk, have dismissed Web3.

Web3 is currently rooted in an assortment of technologies ranging from poorly implemented to extraordinarily disruptive. But Web3 is just as inevitable as Web 2.0 was — all things will evolve. Web3 may not ultimately be cryptocurrency, NFTs, or the Metaverse. But it will be.

The major driving force behind Web3 is the continued integration of the internet into our daily life, through smart devices, Internet of Things solutions, and just social media. People are getting involved in Web3 by:

Web3 as technology may not stay the same. We don’t use the same web development technologies as we did in 2005, when Web 2.0 emerged, but we use the internet in much the same way. Web3 as a philosophy, standard, and social trend, on the other hand, is more likely to play a large factor in our society.

The Future of Web3

So, you could build the next Web3 platform. Or just invest in the next big thing. There was never any huge transition from Web 2.0 to Web 1.0. If you’re on social media, you’re probably already experiencing Web3.

Lost in the discussion of Web3 technologies is what Web3 really is — a shift in how we view the internet.

During Web 1.0, the internet was really a passing fancy. It was a hobby for some. It was a career for few. It was something that most people could take or leave.

During the era of Web 2.0, the Internet became an essential but still separate world. It became a place where we played games and worked remotely, but not a place in which we lived.

Web3 begins the era of blurred lines, in which the online world is no longer so distinct from the “real” world. And we’re already there. With the proliferation of social networks, online dating, and remote-only work, we have started to move seamlessly between both realms.

The future will likely hold better implementations of the existing technologies we are exploring — and further regulation of those technologies.

Conclusion: What Does Web3 Mean?

Web3 outlines a new way of interacting with the internet — and new technologies that may decentralize the internet and put it back in the average user’s control. But Web3 is still new, and the technologies involved are still finding their footing.

If you’re interested in the technology that drives Web3, consider:

The world of Web3 is still in development. And it’s full of extraordinary opportunity and promise. If you want to be a voice that shapes the new world, it’s time to start learning about blockchain technology.

The Metaverse is likely the most well-known example of a Web 3.0 technology — but not necessarily the one Facebook is building. The Metaverse as a concept is a post-scarcity, peer-to-peer, decentralized digital world that interacts with the real world.

Ideally, Web3 will lead to the decentralization and democratization of the internet. Through this, Web3 should be able to obtain greater levels of security, privacy, and control.

Web 3.0 tools include augmented reality, virtual reality, blockchain technologies, and anything else that blurs the line between the real world and the internet.

4. What is the Difference between Web 2 and Web 3?

Web 2 was typified by large corporations gaining control over broad swathes of online territory (such as Google) and the World Wide Web becoming essential to the way people live and work. Web 3 will see the web not only remain essential, but seamlessly integrate into our lives.

You can invest in many Web3 startups and technologies, such as AR/VR companies, cryptocurrency companies, and NFT collections.

Hopefully, Web3 technologies will become less disruptive and better implemented as a whole. The digital world will need to smooth out the issues with disruptive technologies and a significant loss of trust.

7. Why Are So Many People Talking about Web3 All of a Sudden?

The term Web3 was only coined a few years ago. However, many Web3 technologies, such as cryptocurrencies, have been profoundly disruptive and high-profile.

Getting Started with Web3 Development (click.linksynergy.com)
Welcome Back
Continue with: