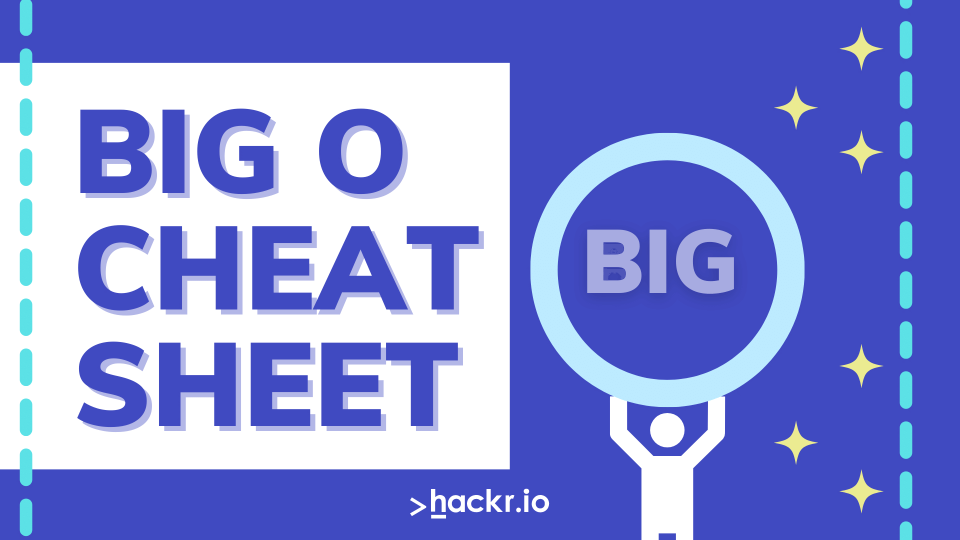 Programmers use Big O notation for analyzing the time and space complexities of an algorithm. This notation measures the upper bound performance of any algorithm. To know everything about this notation, keep reading this Big O Cheat Sheet.

While creating code, what algorithm and data structure you choose matter a lot. Big O notation helps you compare the performance of various algorithms and find the right one for your type of code.

Today, in the modern world of complex applications and software, it is necessary to perform well in a different environment. For this, you need to optimize your code without any lag while executing the underlying code. Whenever you get the result of the Big O notation, you will be able to check if you have a lower running time than your competitors.

Thus, it has become necessary for programmers to check their code and analyze it thoroughly. This Big O Notation cheat sheet (time complexity cheat sheet or data structure cheat sheet) will help you understand various complexities.

This Big O cheat sheet is intended to provide you with the basic knowledge of the Big O notation. To begin with, we shall briefly discuss what exactly the Big O notation is. Further, we will look at various time and space charts and graphs for various algorithms.

What is Big O Notation?

Big O Notation refers to a mathematical function applied in computer science to analyze an algorithm’s complexity. It defines the runtime required for executing an algorithm, but it won’t tell you how fast your algorithm’s runtime is. Instead, it will help you identify how your algorithm’s performance will change with the input size.

As per the formal definition, we can define O(g(n)) as a set of functions and a function f(n) as a member of that set only if this function satisfies the following condition:

If an algorithm carries out a computation on each item within an array of size n, that algorithm runs in O(n) time and performs O(1) work for each item.

What is Space and Time Complexity?

Both the space and time complexities depend on various factors, such as underlying hardware, OS, CPU, processor, etc. However, when we analyze the performance of the algorithm, none of these factors are taken into consideration.

The following are some complexities:

What is the Big O chart?

It is an asymptotic notation, allowing you to express the performance of algorithms or algorithm’s complexity based on the given input. Big O helps the programmers to understand the worst-case scenario and the execution time required or the memory used by an algorithm. Big O complexity can be understood with the following graph. This graph is also known as the Big O graph or Big O chart. The following is a detailed explanation of different types of complexities with examples:

The above code will run in O(1) time concerning its input. Whether the above array has one item or 100 items, the function will require only one execution step. Thus, the function comes under constant time with order O (1).

An algorithm will have a linear time complexity when the running time will increase linearly concerning the given input’s length. When the function checks all the values within input data, such type of function has Time complexity with order O(n).

Some examples of algorithms with Logarithmic time complexity are binary trees or binary search functions. It will include searching a given value in an array by splitting the array into two and starting searching in one split, ensuring that the operation is not done on every element of the data.

The above example is the recursive calculation of Fibonacci numbers. O(2^n) specifies an algorithm where the growth gets double every time the input data set is added. The growth curve of an O(2n) function is exponential that starts as shallow and then rises meteorically.

Whenever you calculate the Big O complexity of any algorithm, you can throw out the constants.

We only look for the big O notation when n gets arbitrarily large. As n gets big, adding 100 or dividing by two decreases significantly.

Algorithm complexity is a measure that calculates the order of the count of operations carried out by an algorithm as a function of the size of the input data.

When we consider complexity, we speak of the order of operation count, not their exact count. In simpler words, complexity tells an approximation of the number of steps that execute an algorithm.

Big O Algorithm complexity is commonly represented with the O(f) notation, also referred to as asymptotic notation, where f is the function depending on the size of the input data. The asymptotic computational complexity O(f) measures the order of the consumed resources (CPU time, memory, etc.) by a specific algorithm expressed as the input data size function. The following table will explain different types of algorithm complexities:

Now that you have understood the concept of the term algorithm complexity, we will look at the comparison between the basic data structures for estimating the complexity of each of them while performing the basic operations like addition, searching, deletion, and access by index (wherever applicable).

In such a way we could easily analyze the operations we want to perform and understand which structure would be appropriate. The complexities of carrying out the basic operations on the basic data structures can be seen in the following table. Here we reach the end of the Big O cheat sheet. In this modern world surrounded by advanced technologies, creating complex software requires lengthy codes to process. But to improve the performance and reduce the time taken to carry out any task by the software, the code must be optimized. It is only possible by implementing a suitable array and data structure code.

The programmers need to analyze the complexity of the code by using different data of different sizes and determine what time it is taken to complete the task. If the time and space complexity are high, you can change your code and test again for its complexity. Big O notation is a function for analyzing the algorithm’s complexity. You can go through this Big O cheat sheet for a better understanding.

Interested in learning more about data structures, including more advanced data science projects? Try ProjectPro to implement big data where you work. They offer data science projects and schedule live, interactive sessions with experts. Or, when you want to upgrade your own skills, these DataCamp courses offer deep dives into many more topics.

To calculate Big O, you first need to consider how many operations are performed.

The following are simple steps:

We then return the total, another O(1) operation.

Big O notation, also referred to as the time complexity, implies the amount of time an algorithm takes to run. It indicates how long a specific algorithm runs as the data tends to grow.

The two most important rules are:

The Big O of a while loop depends on how you run it: