What is Programming language? 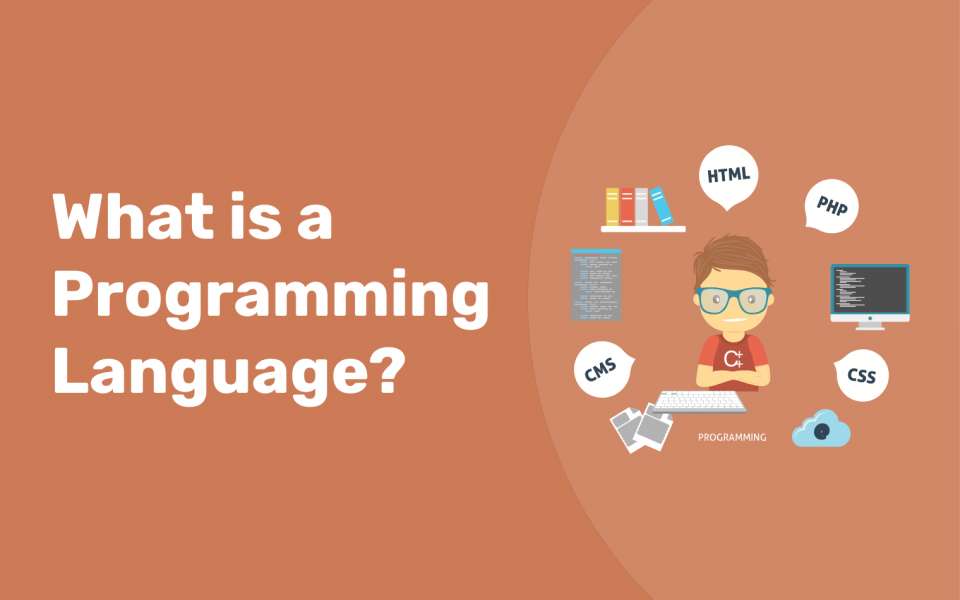 Language has been our primary mean of communication and human interaction for thousands of years. For a community, the language contained the words that the people need to communicate, words themselves are abstract, but they indicate the meaning, they point to objects or actions, etc..

When you look at your computer, you’ll find it’s not so much different. There are many pieces of hardware and software that need to communicate with each other. Your application is reacting to the mouse and keyboard or even the mic, it can read files from your disk storage and so on. But at the end of the day, the machine understands nothing but bits, 1s, and 0s, the combination of which creates meaning.

The very earliest computers were actually programmed by changing ones and zeros manually, alternating the circuit and the wiring. Of course, it was not easy to create many programs as most were used for specific applications only, and they were gigantic in size so they were quite limited. That’s why the creation of programming languages was a revolutionary step that took the field to another level. Unlike normal languages, keywords in programming languages are limited, and by combining these keywords, developers are able to create different types of programs. There are special pieces of software that turn the code you write into machine language that the machine understands. So what is programming language? In short, a programming language is the set of instructions through which humans interact with computers.

What is a Programming Language? What is Code?

The code is pretty much like writing a paragraph of instruction or creating a to-do list to computers. Unlike us humans, the to-do list and instructions you write for the computer has to be extremely detailed and written in some logic.

With code and programming, you can get the computer to draw complex shapes and create rich computer graphics, and then create programs that understand game mechanics and help you build games that feel real with gravity and particle collision, with these programs you can create the most intense and immersive games of all sorts.

With code and programming, you can create and send content all over the world with your blog and personal website and style your blog to meet your style. You can build tech-driven business solutions and reach a wider range of customer and cater to a wider range of needs.

Furthermore, with code and programming, you can create smart home applications, like an automated pet feeder, a smart mirror or even create a robot that can help around with household tasks and be your virtual assistant to talk to and understand you. Unlike what many people think, there’s a lot of art involved in computer engineering and computer science. You might be interested in our What is programming? blog post to know more.

Here is the code to write “Hello World!” in C programming language:

Now, let’s see what are the uses of programming languages.

If you’re interested in building websites there are two intertwining parts to look into.

First, there’s front-end development, which is the part of web development that creates the application that runs on your browser and adjusts the styling, the colors, the interactions. It’s basically concerned with what the user of a website sees. You are reading this blog on some screen which is shown to you by front-end code. Front-end basics start with HTML and CSS with use of JavaScript. Javascript has become one of the most dominant languages in the last few years for front-end work.

The other part for creating websites is back-end development, which is related to the server, the computer that runs the website software and serves it to the world. It’s mostly concerned with routing, which pages to deliver to the user when they visit a certain URL, it also communicates with the database that stores the website’s information and sends this data over to the user. Back-end development is where the magic happens and there are many options to choose from when it comes to a programming language, you can stick to Javascript just like in front-end development, or go with PHP, Ruby, C#, Elixir, Python, Erlang.

Game development is one of the most interesting tracks there is, many developers enjoy it and there are developers who develop games just for having fun. Creating games requires what’s called a game engine, which is a software that is used as the infrastructure for building the game and defines what the game has and what it can do. If you’re familiar with Epic Games and Fortnight, Epic Games is, in fact, a game engine and Fortnight is built upon it. The languages used in game development are mostly C++, C# since it requires a lot of memory optimization and fast performance to create rich graphics. It’s not limited to C++ and C#, however, and it kind of is about which engine you’re using and which platform you’re targeting, Lua and Java are also very famous candidates in this industry.

How to learn a programming language?

Learning programming languages primarily requires dedication and practice, you can not become a programmer without writing code. That being said, you can begin to understand Computer Science with an introductory course you like, my recommendation would be Harvard’s CS50 which is publicly available on their youtube channel. After getting familiar with programming and basic concepts, you can pick up the field and language you like and search for resources. You can find hundreds of useful resources, tutorials, and FAQ on Hackr.io concerning many languages and technologies. You’ll also find programming roadmaps for different tracks and blog articles comparing and exploring the different parts of software development.

What are the most popular programming languages? According to the Stack Overflow Developer Survey of 2018 where more than 100,000 developers are surveyed about their development career. The most popular industry field was found to be web development with more than 57% of developers working as back-end developers, and 37% working as front-end developers. This earns Javascript the first place as the most popular programming language of all, followed by Java, then Python. Github’s 2017 Octoverse showed similar results with Javascript being the most popular language, followed by Python, Java, then Ruby.
Any questions/doubts on programming languages? Feel free to ask in comments.

How will i learn a programming language,and learn about java and python

This article gave me some insight about programming. It really a big help for me as a freshmen student in reaching my dreams soon even though its not fully detailed but at least I gain some knowledge and tips on how programming language is important especially in the field technology.

Thank you for making this blog, while im reading this blog I've take down notes so that i can study it and have enough for programming.

Thank you for giving this information. It really help us to have an introduction about programming ?

Thank you so much

i want to learn programming from the scratch. how do i go about it pls

New to all of this and want some guide.....want to be a great hacker and website developer

i want to learn programming to the apex
please where is suitable for me to start learning ?
and how do i go about it

I WANT TO LEARN JAVA OR COTLIN...PLEASE HELP ME