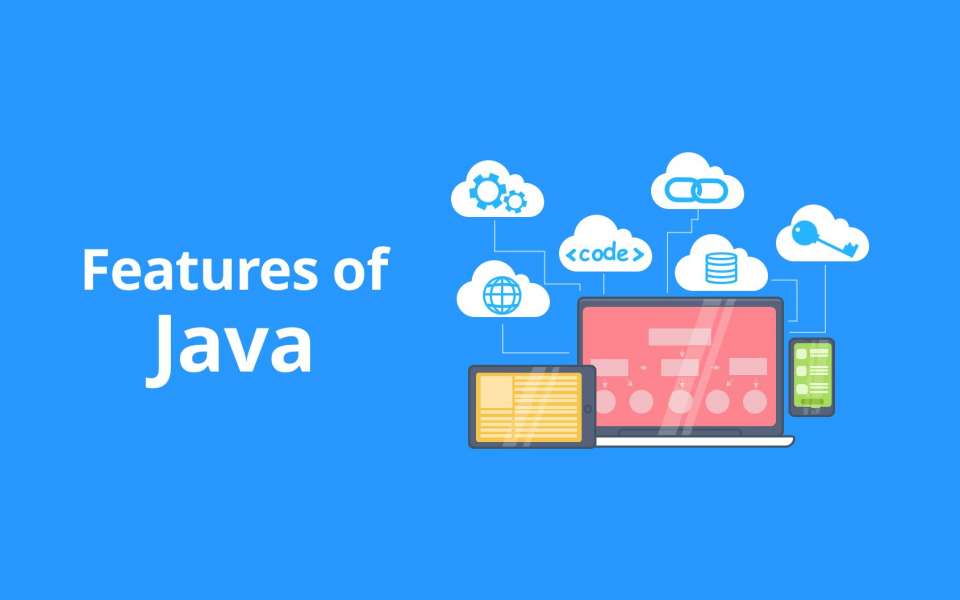 Everyone who has ever heard about programming knows that Java is among the leading programming languages. Java is increasing in popularity every passing year because of its impressive features. Let's take a look at the top features of Java that make Java a darling to developers.

The Java compiler is designed for performance. Java code is compiled into bytecode and then compiled by the Java compiler. Post that, it is fed to the JVM (Java Virtual Machine) before it’s converted to machine level code.

Inspired by C and C++

Multithreading capabilities come built right into the Java language. This means it is possible to build highly interactive and responsive apps with a number of concurrent threads of activity.

Java has a philosophy called WORA (Writing Once, Run Anywhere). Java code is compiled into an intermediate format, called bytecode, which is to be executed in the JVM (Java Virtual Machine). Any system that runs a JVM is able to execute the Java code.

Java guides the programmer to adopt important programming habits required for the creation of highly reliable applications. Unlike C and C++, Java relies on a simple memory management model reinforced by the automatic garbage collection feature.

Safety features are built into the language and runtime systems. These include runtime checking and static type-checking at compile time. With such features in place, it becomes a daunting task to invade a Java application from the outside.

Ease of reading and writing makes any language simple. This holds true for Java as it has a less ambiguous syntax terminology. Anyone can start right off with Java with an understanding of the basic underlying principles of programming.

Other benefits of Java

Other than the aforementioned features, here are some other great options for choosing Java over other programming languages:

Why is Java so popular?

An important reason that contributes to the immense popularity enjoyed by Java is its platform independence or multiplatform support. Java programs are able to execute on different machines as long as there is a JRE (Java Runtime Environment) in place. Be it mobile phones, PCs running Linux, macOS, or Windows, and even large mainframe computers, JRE is compatible with all of them.

Java has been around for over two decades, and it has been enjoying the sunshine of fame. Therefore, it is obvious that several big names have built a solid foundation using Java. Even after spending so much time, there are no signs of slowing down as the high-level, object-oriented programming language is climbing the ladder of popularity.

Java is an evolving language, like real languages, and thus it has the unique ability to combine innovation with stability. Any code that was written way back during the humble beginnings of Java will still run on today’s faster and better JVMs. Additionally, the code will gain from:

As the objects are free from references to external data, Java code boasts robustness. Though the programming language is simple, it is powerful enough to allow spawning a wide array of libraries and classes.

Where is Java Being Used?

For several years, Java has been the language of choice of naïve and experienced programmers, alike. Some of the most important uses of Java are:

Whether you’re looking forward to a career in game development or develop immaculate web applications, Java is worth the effort. The programming language is able to adapt to a wide set of environments, thus allowing for remarkable capabilities and opportunities.

Learning Java allows you to better understand the underlying concepts of programming as well as enable you to have a jumpstart in learning other popular, Java-inspired programming languages.

For a web developer, there are several programming languages and frameworks to toy with. Therefore, the more the merrier. Having an understanding of several web technologies and programming languages will ensure you stay relevant in the rapidly-evolving field of IT and make a good living in the age of information.

What is executor in multithreading?

It is an abstraction layer in the actual implementation of Java Multithreading. Executor framework is the first concurrent utility framework in Java which is used for standardizing invocation, scheduling, execution, and execution and control of asynchronous tasks in parallel threads.

How does executor work in Java?

What is use of callable interface in Java?

Java Callable interface use Generic to define the return type of Object. Executors class provide useful methods to execute Java Callable in a thread pool. Since callable tasks run in parallel, we have to wait for the returned Object.

What is the difference between runnable and callable in Java?

What are the benefits of using Java over C++?

Why pointer is not supported in Java?

A pointer is used to directly access the location using the address. Memory access via pointer is arithmetic and it is unsafe. Pointers allows manual memory management but Java doesn’t. Java doesn’t support the pointer concept and this makes it more secure language.

Which language is more secure Java or C?

Why Java is secure with example?

Java has its own memory management, no pointer concept, access specific keywords as public, private, protected, compile-time checking and exception handling are the features which make Java more secure.

Why do we serialize objects in Java?

How does volatile variable works in Java?