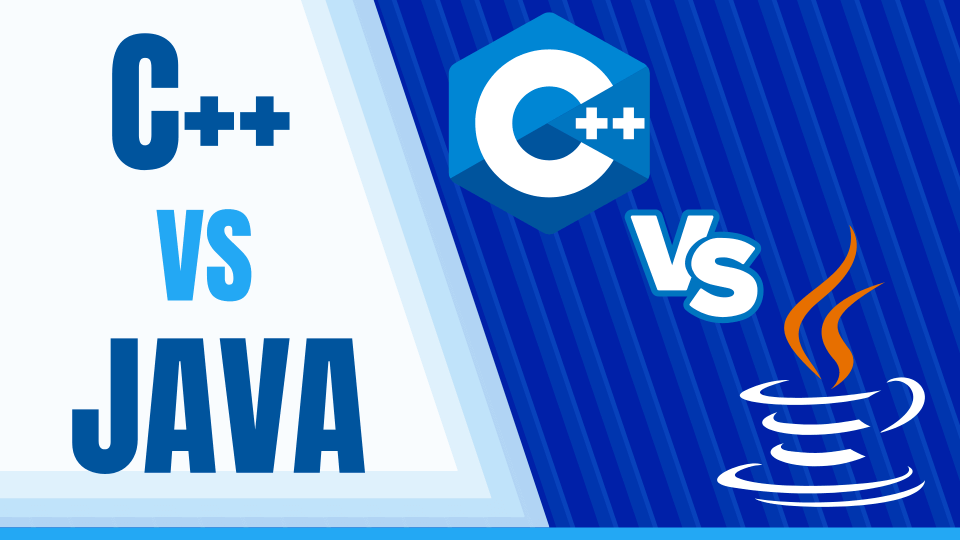 C++ and Java are among the big names in the world of programming. These two computer programming languages are popular because of their wide applications. But what’s the difference between CPP and Java?

Learning C++ and Java gives you a foundational understanding of programming. So, they’re both great starter languages for anyone new to programming. This is why schools and colleges that teach programming have C++ and/or Java as mandatory subjects.

Now, let’s look at the difference between C++ vs. Java.

Let’s dig deeper into the differences and similarities between C++ and Java, starting with a basic overview of the languages and their histories. As a student, the foremost diff between C++ and Java is syntax. Java syntax tends to be easier and cleaner to read – you’ll notice this once you experiment with Java projects.

But that’s not the only Java and C++ difference. Developed by Bjarne Stroustrup, C++ is a programming language that’s:

Developed by Oracle, Java is an object-oriented programming language with all the high-level features. James Gosling from Sun Microsystems originally developed this language. Later, Oracle acquired this company in 2010. This OOP language is also a general-purpose language and:

Compared to C++, it doesn’t give you much freedom to perform low-level memory manipulation.

Ease of Use and Development Speed

Each language has a large variety of libraries, frameworks, SDKs, and other tools to make your application-building quicker and easier.

Some general-purpose C++ libraries and frameworks include:

Some useful C++ libraries for audio include:

Some great C++ libraries for AI operation include:

Bottom line? C++ has tons of libraries. Check here and here for other C++ libraries and frameworks.

C++ and Java are general-purpose programming languages, meaning you can build almost any type of software application for almost any platform using the right tools, IDEs, libraries, and frameworks of these languages.

Both are marketable programming languages. Let’s look at some real-life uses for each:

C++ is a compiled language, while Java is interpreted and/or compiled.

Other Differences Between C++ and Java

But there are also similarities between C++ and Java. Because they are both general-purpose languages, you can do anything in C++ that you can do in Java, and vice versa – you just need to use a different technique.

Similarities Between C++ and Java

Is C++ similar to Java? Absolutely. These two languages have similar syntax and language features. They are so similar that if you’re shown some portion of C++ code from a project and asked whether it’s C++ or Java code, you may confuse yourself.

It’s not that hard to learn C++ if you know Java (or vice versa). Different programmers will have different opinions on which language is harder or which language best follows coding best practices.

Primitive data types, loops, conditional statements, conditional operators, arithmetic operators, classes, variable definitions, variable initializations, value assignments – all these other syntax elements are very similar in Java and C++. And since commenting C++ and Java code are identical, these similarities could trip you up.

Comparison Between C++ and Java Applications

The easiest way to understand the differences between C++ and Java is to look at the applications designed with each.

Some popular C++ applications include:

Some popular Java applications include:

The Best Tutorials, Classes, and Bootcamps for C++ and Java

So, once you’ve compared C++ and Java you need to make a decision – which do you want to learn first? Most programmers know a touch of both. Java tends to be the first language people learn in school because of its utility and its popularity.

Find out whether C++ is the right language for you. This course is less than ten hours of material and will give you a basic overview of the C++ language. However, it’s targeted toward people who understand programming fundamentals.

A 25-hour course on the basics of C++. Codecademy has a hands-on learning platform that walks you through the basics of becoming a programmer from scratch. This lesson includes variables, loops, functions, and the basics of developing your first program.

Get serious with this bootcamp. This 4-month class has everything you need to know to become a developer under Udacity’s nanodegree program. The comprehensive lesson plan includes a total of five coding projects.

After learning C++, consider getting a C++ certification to prove your skills.

Java has such an active community that you can learn through code if you’re self-motivated and driven. But you also have excellent courses to choose from:

If you want to know more about what Java can do, this is the course for you. Presented by Duke University through Coursera, Java Programming is a comprehensive, self-paced program that will take you from beginner to intermediate.

Eighty hours of on-demand video will show you the ins and outs of Java programming. You’ll learn how to create your first Java program, the most common Java tools, arrays, generics, and more.

Dig further into how Java with real world applications. This course includes multiple assignments, 15 hands-on coding exercises, and 67 hours of video intended to make you a full-fledged Java engineer.

As with C++, consider getting a certification after completing your courses – it’ll help.

Should I Learn Java or C++?

If you’re wondering “Is Java easier than C++,” the answer is probably Java. Java is a great first language because it’s easier. C++, Java, Python – these are all used as intro programming languages for a reason. C++ compared to Java tends to be a little more obscure and even archaic in terms of syntax.

But is C++ harder than Java? Depends on what you’re trying to do. If you want to create a lightweight application for Windows, C++ would be easier. Even the main differences between Java and C++ don’t supersede the fact that both are great languages, so you can always learn one first and learn the other later.

We have learned from this article that both C++ and Java are powerful languages. When deciding between C++ vs. Java, consider making time to learn both to get a solid understanding of computer programming.

So, what are your next steps? Dive deep into a course to practice your skills and impress employers.

As a developer, the “easiest” language is the easiest language for you. Practice a small application in both to discover which you find most intuitive. In general, developers do find that Java tends to be easier due to its simpler syntax.

Both Java and C++ are powerful languages. Java tends to be more popular for applications that require cross-platform capabilities, whereas C++ provides more machine-level accessibility and lower levels of abstraction.

3. Which Has More Job Opportunities Java or C++?

In general, there are more job opportunities in Java than C++. But this also depends on your discipline; if you’re building IoT devices, for instance, you might find more calls for Java. If you’re building Windows applications, you may find more jobs for C++.

Most programmers will learn Java first. Java is easier to learn, and it’s easier to learn C++ after you’ve learned Java. But if you’re looking for an easier language syntactically, nothing beats Python.

Md Akhtar Hossain is a freelance tech writer, eBook writer, web developer, and an aspiring entrepreneur. He loves to write about web design, web development, mobile app development, and online business. Akhtar has a bachelor's degree and a master's degree in computer applications. View all posts by the Author