What is Python used for? Applications of Python in 2023 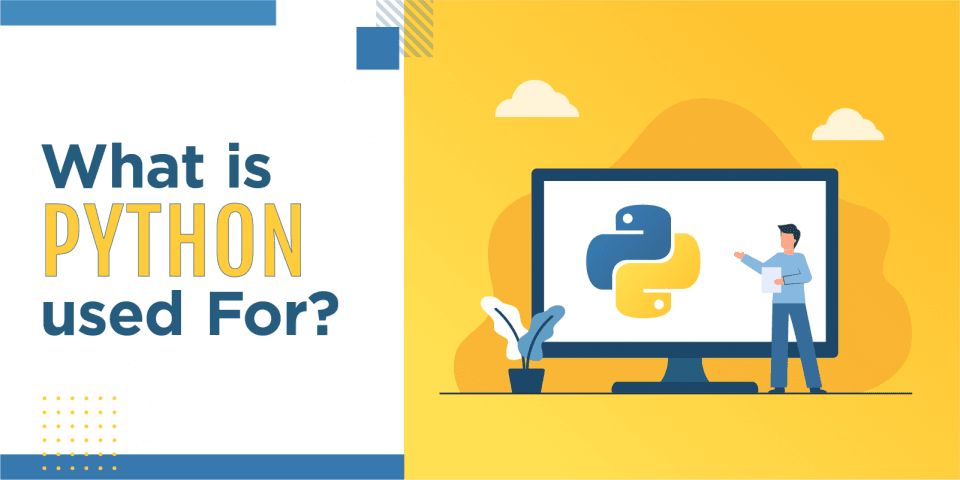 Design and created by Guido van Rossum in 1991, Python is a high-level, interpreted programming language. Python has an object-oriented approach aim to help programmers to write clear and logical code. The language is dynamically typed and garbage collected in a general-purpose programming language. The language supports multiple programming paradigms, including object-oriented, structured, and functional programming. Python was conceived in the late 1980s as a successor of the ABC language. By 2000, advanced features like list comprehensions and garbage collection systems with reference counting were added to Python.

How Do I Learn Python?

Python is an easy language with simple syntax. Python is becoming popular day by day as it is the major backbone of new technologies like data science, machine learning, and artificial intelligence. So several educational websites are offering the best Python courses. You can also check out Python tutorials on Hackr.io to begin your journey as a Python developer. If reading books is the way you like to study and learn, you may want to check out these best Python books that we have shortlisted for you.

Later in your learning journey, when you feel like going the extra mile and testing your skills, you may also want to get certification to become a certified Python Developer. Please read the best Python certifications for your guidance. Lastly, I would recommend you stay focussed, motivated, and encouraged to stick throughout this journey and make it till the end.

What is Python Used For?

With a vast number of advanced features that Python offers a huge number of applications. Google, NASA, CERN, Yahoo, Wikipedia, are the major platforms that use Python for their development. Let us see the major uses of Python below:

Python offers pre-built libraries and frameworks such as Pyramid, Django, and Flask; web applications can be developed rapidly. A framework is made with common backend logic & several libraries help integrate protocol such as FTP, HTTP, SSL, and processing of XML, JSON, and much more. Python Frameworks provides unparalleled security, scalability, and convenience as compared to building websites from scratch.

Python has a list of science-friendly & science-specific libraries & is thus used for scientific research and computing. Some popular Python libraries for Scientific Computing are:

Machine Learning is different from data science & so are the Python libraries for ML. Machine Learning is about training the computer & making it learn through past experiences or patterns using the data stored or creating algorithms through which the computer learns itself. ML offers applications like recommendation systems on Netflix or Amazon & speed recognition. Python plays a vital role in providing ML libraries & frameworks like Sci-kit learn, TensorFlow & more.

Python is much in demand all over the financial world. Python offers features like it is fast, robust, and secure, making its fastest-growing language in finance. Finance technologies in big banks like BOA are working towards transforming their legacy code to Python.

Bots are designed to perform specific tasks over the internet; for example, have you come across a pop-out message box on visiting websites? Those are chatbots and help in providing customer support. Bots are programmed to execute repetitive actions much quicker than humans. Python is one of the main languages for creating bots.

Some of the open-source bot examples are:

Errbot: is a chatbot for creating bots for Slack, Discord, Hipchat. Errbot aims to allow people to generate their programs by manipulating the provided Python source code.

The process of analyzing large databases to construct tendency predictions refers to DM. It is a complex process and involves an analysis of social networks, crime imaging, etcetera. Python is considered one of the best languages to organize and clean data. Also, Python simplifies data analysis with the use of frameworks and algorithms. Popular frameworks for data mining include NumPy, SciPy, Sci-kit learn, Dask.

Graphical User Interface allows users to interact with computers using visuals like icons and images instead of text-based commands. Python enables us to design desktop applications by providing useful toolkits and libraries. Some of the commonly used Python libraries and tools are:

Tkinter: a built-in Python interface that runs on all of the most popular platforms like Microsoft, Linux, and Mac OS X.

WxPython: is a binder for the cross-platform wxWidgets and GUI toolkits.

Kivy: is a Python library for generating mobile apps and multi-touch application software.

Panda3D: It is a wrapper for OpenGL programming.

Blender: It is a tool for creating 3D graphic models.

Arcade: It is a Python library for introducing 2D games into the world.

The scrapping of a large amount of data from the website proves to be useful later in several real-life processes like job listing, price comparisons, research and development, and much more. Python helps in this web scrapping of data with the library called BeautifulSoup.

Applications that can multi-task and output media also make use of Python. Audio-video applications such as TimPlayer, CPlay are based on Python libraries and provide stability and performance.

Python is C-based and can be used to create Embedded C software for embedded applications. RaspberryPi is a well-known application that uses Python for its computing as Python helps perform higher-level applications on smaller devices. The device can be used as a computer or like a simple embedded board to perform high-level computations.

That brings us to the end of uses of the Python programming language, the one that dominates this era of AI and data science. Applications form web and game development to advanced applications like data mining and making bots all rely on Python for rapid development, simple process, and security. Apart from this many industries are turning their production and development to making things smart and automatic based on the concepts of AI and ML, needless to say, Python is the backbone of these technologies and would have increased uses in no time. Switching to Python-based applications is the new trend in the technology industry, and thus the demand for Python developers is high on demand.

What do you use Python for? Let us know in the comments.