Flask vs Django: Which Python Web Framework to Use in 2023? 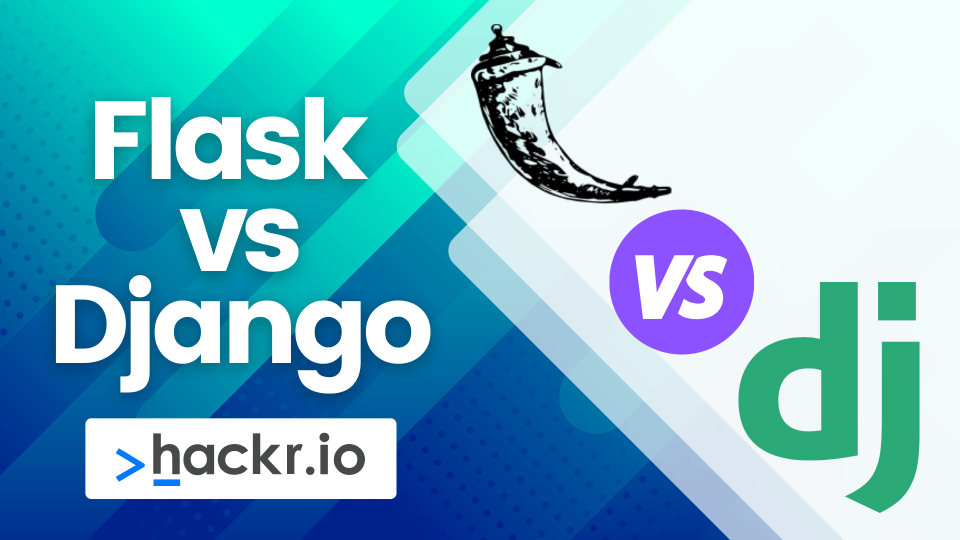 When it comes to the Python programming language, most think about data tasks, whether that’s analytics, data science, Machine Learning, or AI. But there’s more than meets the eye with Python, as it’s also used with two popular web application frameworks, Flask and Django.

Want the TL-DR? Sure. While they’re both open-source web frameworks that use Python, Django is a full-stack framework with batteries included, and Flask is a lightweight but extensible micro-framework.

Sound intriguing? Great! Not sure what a web application framework is? No problem! These are a collection of libraries and modules to help you programmatically create and manage web applications, web services, and websites.

Now we’ve got that out of the way, let’s dive into a head-to-head comparison of Flask vs Django. This will help you understand the difference between Flask and Django as you try to choose the best Python web framework in 2023.

There’s no doubt that Django and Flask are incredibly popular web frameworks, as shown by their top 15 positions in the latest Stack Overflow developer survey. You can even see that Django beats out Express, and Flask is ahead of Angular.js. 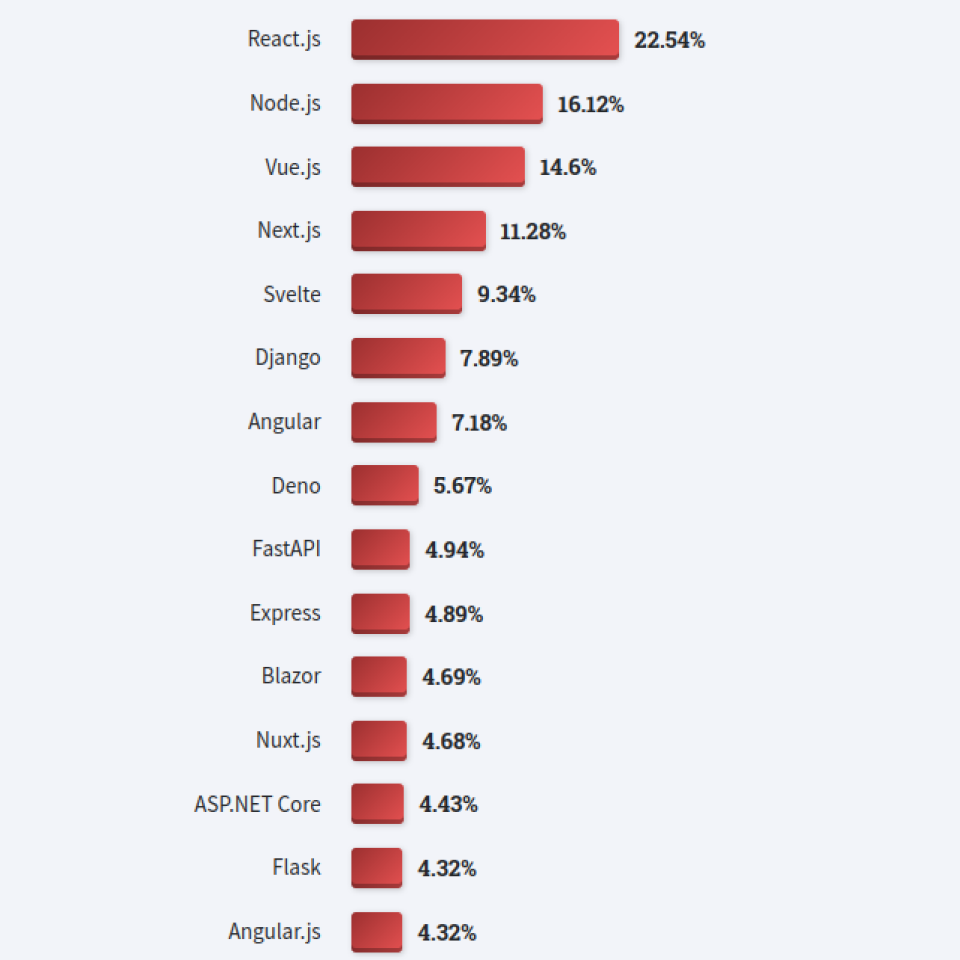 Now we know that these two Python frameworks are popular among web developers, let’s figure out the difference between Django and Flask in our Flask Django comparison table.

Sometimes referred to as the framework for ‘fussbudgets with deadlines’, Django is favored for super-fast development. As a full-stack web application framework, it takes a ‘batteries included’ approach to let you, the developer, focus on building your web app.

Arriving in 2010 and developed by Armin Ronacher, the Flask framework is a Python-based micro-framework with minimal dependency on external libraries, allowing developers the flexibility to choose their preferred design pattern, database, plugins, and more.

Initially, Flask was developed to experiment with the integration of the Werkzeug WSGI (Web Server Gateway Interface) toolkit and the Jinja2 template library. Now a fully-fledged framework that is lightweight and extensible, Flask doesn’t take a ‘batteries included’ approach. This means that developers can search for the extensions or plugins they need without extra weight.

Some would say that Flask is very Pythonic, which is reflected in an easy learning curve. This is particularly clear when you build the time-honored Hello World web app, which only needs a few lines of code.

Looking for ways to learn Flask? Check out

When to Use Flask vs Django?

Are you still wondering: Django or Flask, which is better? There’s no clear answer here, as you’re free to use Flask or Django to build your next web app, but it can help to know the best types of projects and scenarios suited to these two Python frameworks.

You should use Django when you need to:

You should use Flask when you need to:

When thinking about Django versus Flask, it helps to consider whether you’re brand new to Python or web frameworks. In either case, you may find it easier to start with Flask than Django, which has a steeper learning curve and a more rigid approach to creating web applications.

If you plan to build complex apps in the future, it’s well worth learning Django with the wide range of online resources available to you. And if you opt for Django, you can rely on an active community of Django developers who are ready to help if you find yourself in a jam.

This is particularly obvious when you consider that Django is tagged in more than 300k questions on StackOverflow, compared to approximately 50k for Flask.

Despite this differential, both frameworks have trended upwards in StackOverflow questions over the last 10 years, demonstrating growing popularity among web developers. 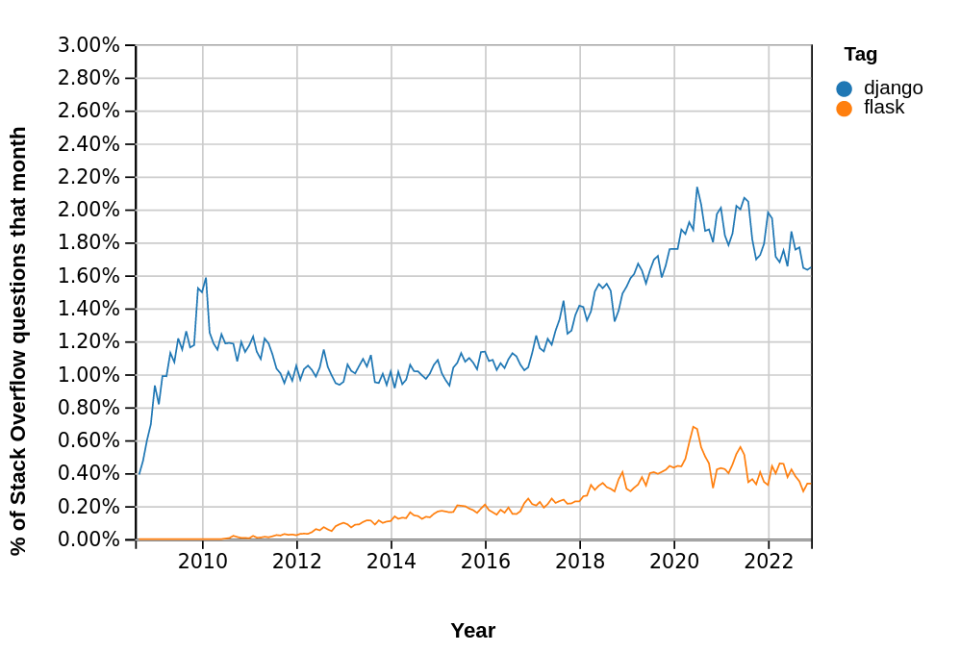 In 2023, Python developers can take advantage of their Python coding skills for so much more than data science, Machine Learning, or AI. So if you’re interested in web development, you should check out the popular Python web application frameworks, Flask and Django.

These collections of libraries and modules are a fantastic way to create websites, web applications, and web services programmatically. To help you determine which framework to choose, this article has looked at Flask vs Django with a head-to-head comparison of the key features, pros and cons, and best use cases.

With Django, you get a full-stack web framework with a ‘batteries included’ approach that’s excellent for large projects that require security and scalability. Suppose you’re after a little more flexibility. In that case, Flask is a perfect choice as it’s a lightweight and extensible micro-framework that’s great for smaller projects that need the flexibility to add specific libraries both now and in the future.

Want to learn more about Django? Check out

1. Is Flask Easier Than Django?

Most people find Flask easier to learn than Django as it offers greater flexibility and a less rigid working style. But while Django has a steeper learning curve, it can pay off if you build secure and scalable web apps that will grow in complexity.

2. Should I Learn Django or Flask First?

There’s no correct answer here. If you’re new to Python, you may find it easier to learn Flask before Django. Once you have the fundamentals, you’ll find it easier to transition to Django later. On the other hand, if you’re more experienced in Python or web development, you might prefer to dive right into Django.

3. Django vs Flask, Which Is Better?

Neither is better or worse than the other, but they may be better suited to specific use cases. For example, Flask is suitable for smaller projects that need the flexibility to add particular libraries both now and in the future. Django is great for large projects that require security, scalability, and built-in features.

4. Which Is Better? Flask or Django For Beginners?

If you’re a beginner in Python or web development, you’ll likely find that Flask is a more accessible place to start, as it’s much quicker to get your project off the ground due to a smaller codebase and a less steep learning curve.

"It is written in Python, currently, the most popular programming language that can run anywhere. "
- this statement killed the articles credibility for me. ;(

No, with time its usage has been increasing. Even big organizations like Instagram are using it and taking advantage of its features. It has all the required features for web application development. Developers and contributors are regularly working to keep the Django up to date.

Which database is best for flask?

Flask does not support databases particularly which is great, as you have many database options to choose from. With the help of flask extensions, the database will integrate with applications. As flask is an open source python platform, people generally prefer open source database options like SQLite, MongoDB or PostgreSQL.

Is flask good for web development?

Flask is lightweight python framework that is used to create sites with great ease and in faster way. It makes development faster by offering codes for even small activities. It depends on middleware to add functionality as per requirement. Flask’s core is simple with number of extensions which blends with it.

Is flask a frontend or backend?

Flask is a complete back-end framework. It is a small framework that works without any form validation or database abstraction layer.

Do I need to know HTML for Django?

Yes, it is important that you have a sound knowledge of HTML and CSS. It will help you while creating web page templates. If you are not going too deep into coding still the basic concepts should be clear for understanding any project.

Is flask easier than Django?

Flask is a micro-framework for python while Django is a high-level python web framework. Thus, flask is much easier to understand and to learn. Both are open source platforms, flask is used for small applications as compared to Django. Both have different usage and are used in different applications.