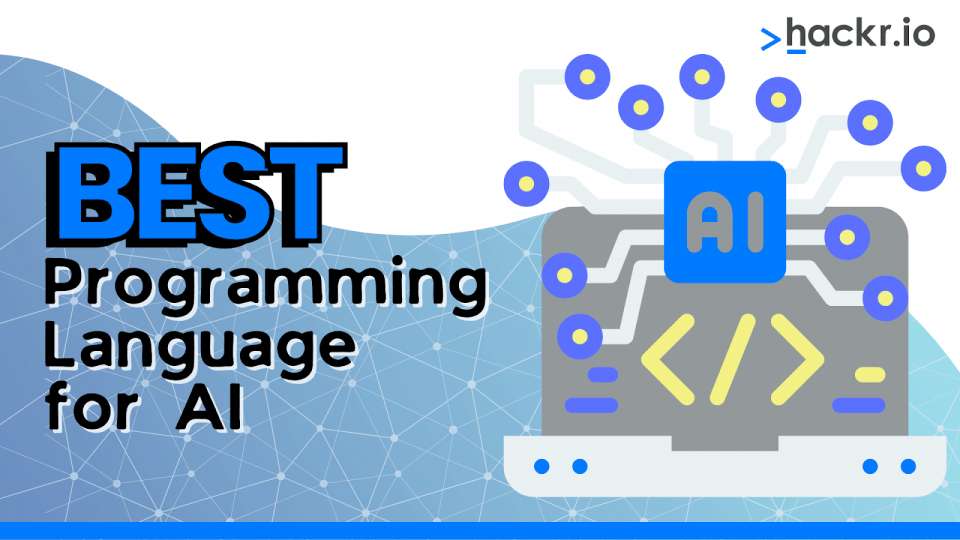 Thinking about AI development? It’s an excellent career move. Not only are AI-related jobs growing in leaps and bounds, but many technical jobs now request AI knowledge as well.

The language you learn will determine:

Let’s look at the best language for AI, other popular AI coding languages, and how you can get started today.

What is the Best Programming Language for AI?

For most programmers, Python is the best programming language for AI. Other top contenders include Java, C++, and JavaScript — but Python is likely the best all-around option for AI development.

Let’s compare some of the major features of these four languages:

Why is Python the best programming language for artificial intelligence?

AI industry. Many employers are hiring Python AI developers. According to Payscale, the average salary for a Machine Learning Engineer with Python Skills was $112,178 as of 2022.

The most notable drawback of Python is its speed — Python is an interpreted language. But for AI and machine learning applications, rapid development is often more important than raw performance. Suppose you know any of the above coding languages for AI. In that case, it may be easier to develop AI applications in one of those languages instead of learning a new one. Ultimately, the best AI language for you is the one that is easiest for you to learn.

What Programming Languages Shouldn't You Use for AI?

Some languages aren't well-suited for AI development. These are generally niche languages or languages that are too low-level.

A good programmer can write an AI in nearly any programming language. It's simply a matter of how complicated the process will be.

Python is the best programming language for AI. It's easy to learn and has a large community of developers. Java is also a good choice, but it's more challenging to learn. Other popular AI programming languages include Julia, Haskell, Lisp, R, JavaScript, C++, Prolog, and Scala.

If you’re just learning to program for AI now, there are many advantages to beginning with Python. You can hit the ground running and start developing immediately.

On the other hand, if you already know Java or C++, it’s entirely possible to create excellent AI applications in those languages — it will be just a little more complicated.

Ready to get started? A course is a great way to tone up your Python skills and propel your AI career.

1. Which Language is Best for AI?

Python is the best language for AI. It is easy to learn, has a large community of developers, and has an extensive collection of frameworks, libraries, and codebases. However, Python has some criticisms—it can be slow, and its loose syntax may teach programmers bad habits.

You can use C++ for AI development, but it is not as well-suited as Python or Java. C++ is a complex language with a steep learning curve. However, C++ is a great all-around language and can be used effectively for AI development if it's what the programmer knows.

Yes, Python is one of the best AI languages. In fact, Python has become the "language of AI development" over the last decade—most AI systems are now developed in Python.

In a vacuum, Python is better for AI than Java. It's easier to learn, write, and read. However, Java is a robust language that does provide better performance. If you already know Java, you may find it easier to program AI in Java than learn a new language.

Python is better for AI than C++. C++ is difficult to use and has a very high barrier to entry. Few codebases and integrations are available for C++ because developers don’t use C++ as frequently as Python for AI development.

6. Why is Python Preferred for Artificial Intelligence Programming?

Python is preferred for AI programming because it is easy to learn and has a large community of developers. Quite a few AI platforms have been developed in Python—and it's easier for non-programmers and scientists to understand.