How to Learn Python (Step-by-Step Guide) 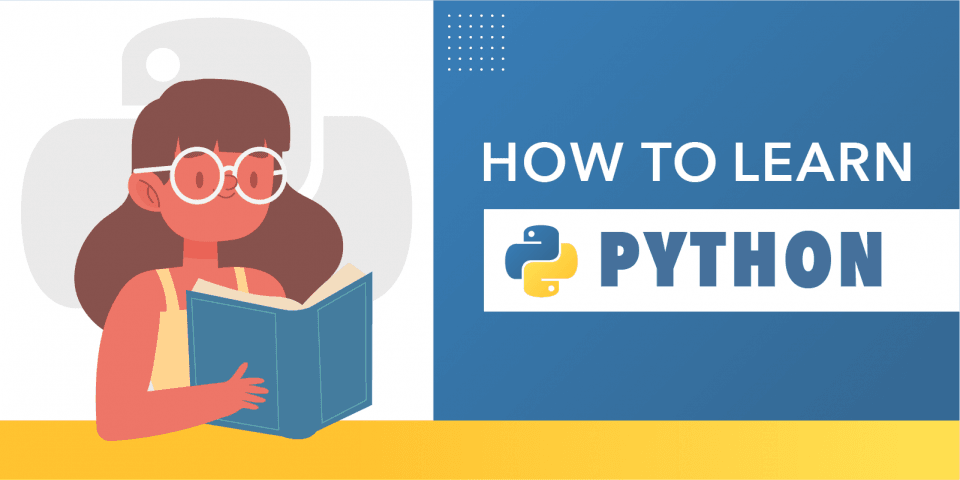 Python is a versatile programming language loved by developers, data scientists, software engineers. Python is recommended for both beginners and advanced developers as it is easy to learn and has clean syntax. The language is used to build large and small web and mobile applications as it offers a lot of useful libraries, frameworks, and modules. If you are not convinced about Python, let's see the major benefits that Python offers. This article will give you complete brief about how to learn python.

Python supports many programming paradigms because it's dynamic and a strongly typed language. It supports object-oriented programming, functional, empirical as well as structural programming. Python offers built-in functions to test variable types and ensures their proper usage. The language is used extensively in the development of game, web, multi-software, and android applications. Python also provides automatic memory management to deal with dynamic storage management that is useful for sharing, segmentation, or caching.

Python is an interpreted language. Thus, it offers a huge advantage to data scientists. They can run programs without compiling data into machine language before execution and can be used across other domains and technologies. Python beats Object Oriented Programming languages (aka OOP or sometimes OOPs) for its least code usage and straightforward code that can be quickly interpreted by an emulator or virtual machine.

Data visualization tools in Python such as Panda, Plotly, and more allow you to create appealing statistical data graphs and interactive graphical plots.

PyUnit is a built-in unit testing framework provided by Python, which assures the proper working of the code, thus making Python the preferred language for programmers and testers for testing web applications and interfaces to avoid bugs and errors before final launch to the public. Python unit test also provides features such as setup sharing, and code tests shutdown, test aggregation, reporting, and collections.

No other language provides features compared to Python when it comes to cybersecurity. It responds to security threats faster than other languages because of its powerful third-party libraries such as Nmap, Yara, etc. Python is also capable of running penetration tests on web applications and can detect system breaches. It contributes to building impenetrable applications to avoid cyber exploitation using its strong typing script.

Python language supports the Object Oriented Programming concepts, which is structuring the program using objects and classes. OOP concepts provide features like classes, methods, polymorphism, encapsulation, and inheritance. We have covered high-level OOPs concepts in Python in the appendix at the end of this article. Learning OOPs is not a mandatory prerequisite.

Learning data structures and algorithms is an optional prerequisite to learning Python; however, you must learn them once you know basic Python.  Get a taste of sorting algorithms, graphs, trees, stack, queue, and linked list, and more. Coding for data structures will give you a chance to explore predefined classes and objects so that you are well-versed with the language before you take up real-life projects.

You can learn insertion sort in Python in the appendix below.

3. How to Install Python?

If you are on Windows, you can install Python in simple 2 steps:

The first step to install Python is downloading the executable Python file from the official website www.python.org/downloads.

Verify if pip is installed

pip is the Python package manager; it comes pre-installed with Python, so you do not have to install it separately.

You don't need to install a Python IDE at the very beginning of your Python learning journey, but if you are serious that Python is for you for the long-term, then an IDEs is a superpower. You may want to use code editors, but IDEs are preferred for beginners because of their features such as syntax highlighting, auto-completion, error highlighting, and smart indentation, which trains beginners to write clean code.

You can refer to our article on Python IDEs to learn in-depth about recommended Python IDEs.

5. Repl.it: It is a free online Python compiler. We love it.

How To Learn Python

Learning Python is not about reading books or enrolling in an online course; instead, it must be only coding practice, practice, and practice. Learn the basics, to begin with, such as concepts like variables, loops, conditional statements, and classes and methods and then work on your coding skills and learn the rest as you code through your way. Participate in online coding challenges and problems, try solving them, and learn something new about the language. Learning through imparting practical knowledge gives you a whole new level of confidence and experience to learn about the language.

You can refer to our best Python courses article to learn about the top courses recommended by Python developers. Below are a few of them in brief:

1. Complete Python Bootcamp: Go from Zero to Hero in Python 3

Topics covered in the course:

2. Python for Everybody Specialization

What the course teaches:

This step is mandatory if you plan to aspire to be a Python developer. Once you are confident enough in your learning track, please take the next step of building projects and adding them to your portfolio. Take a beginner level project that interests you and something that urges you to learn more. It would be best to begin with an easy project to keep up with your interests and spirits. No one is stopping you from taking up challenges if you love them!

We have listed below a few projects here, however, we encourage you to try more Python projects for the enhancement of your skills.

Beginner programmers most love the project as it has concepts like strings, variables, and concatenation. The project prompts the user for a series of input, and then the application arranges these to build a story template.

It is amongst the common projects to build when one learns a new language. The alarm clock project is a Command Line Interface (CLI) Python application and favorite to all as everyone uses it, and this is installed in every device.

This project is for game lovers who like playing games and also building one. Tic-tac-toe is a popular game that everyone likes, and hence this project is an interesting one to be one of your firsts.

This may seem challenging while you are a beginner, but if you have decided to be a Python developer by profession, then taking this step and earning a certification guarantees you to open new doors in your career path. Don't be afraid to study and earn a certification; instead, take it as a challenging task and win over it with a badge or certificate.

Choosing the best certification that suits your portfolio can be overwhelming, so we have listed a few popular certifications you might want to begin. You can even check out our detailed article on Python Certifications to explore further options.

Once you are confident with the Python language and see yourself working as a Python developer, no one stops you from applying for the job that interests you. Ace your interview and land your dream job of being a Python developer. We have recommended below the commonly asked Python interview questions for the rest to check out for further preparation. Apart from studying for Python interview questions, you must also have good hands-on coding experience as no interview occurs without a technical round, which tests your coding skills. Also, having a portfolio of Python projects is a plus. Let us see popular interview questions below:

Here is our in-depth article on more Python Interview Questions. Go through every interview question before your interview or just to test how many you can answer:)

Frameworks make life easier for programmers by automating the implementation of redundant tasks, thereby cutting development time and allowing developers to focus on the program's logic. Python offers abundant frameworks and is broadly categorized as full-stack, micro-framework, and asynchronous. We shall discuss Django and Flask briefly below, which are most preferred by the developers. To make a further choice of frameworks for your projects, visit Top Python Frameworks.

Django is a full-stack, open-source, and free to use framework. It follows the DRY principle and makes use of its ORM for mapping objects to database tables. It offers great built-in features rather than offering them as individual libraries.

Flask is a microframework that allows developers to build a solid web application foundation from where it is possible to use any extensions required. The framework requires the Jinja2 template and Werkzeug WSGI toolkit and is inspired by the Sinatra Ruby framework. The framework is also compatible with Google App Engine.

This ends our detailed guide to become a Python developer. Let us have a quick look at what we have gathered in this post:

Prerequisites of Learning Python: Learn data structures and algorithms, OOP concepts, and where to install Python.

Python Courses: We discussed a few popular courses to kickstart your journey to become a Python developer.

Python Projects: I must emphasize this as this gives you an edge over others when you apply for a future job. Having projects in your portfolio increases your chances of getting hired, plus you learn a lot!.

Python Certifications: Earning a certification and getting certified increases your confidence in the language and offers benefits like a pay increase and may be promoted.

Python Interview Questions: Interview questions are the best way to test yourself while preparing for an interview and boost your confidence for the big test day.

Go ahead and start your journey of becoming a professional Python developer and end up in your dream job.

How did you find this article? Was it informative enough? Or not? Let us know!

Feel free to post a question below, if any. Also, check the other blog that we have provided you with links in this article.

Good Luck with your Learning!.

Let us see in detail how Python supports OOPs concepts:

Class is considered the blueprint of the object; for example, consider a picture sketch of an animal that tells about the animal-like color, species, build, and more so we have a detailed description of the animal study. A class in Python is defined using the class keyword. Once a class is created an object is created for the particular class.

Methods define the behavior of an object and are defined inside the class.

Python supports inheritance, i.e., creating a new class with the existing class's help and deriving some properties from it.

Encapsulation prevents data from modification by restricting access to variables and methods. Python declares attributes as private with an underscore as the prefix.

Let us see a small sample code for insertion sort in Python: (this can also go to appendix)