How to become a Web Developer? 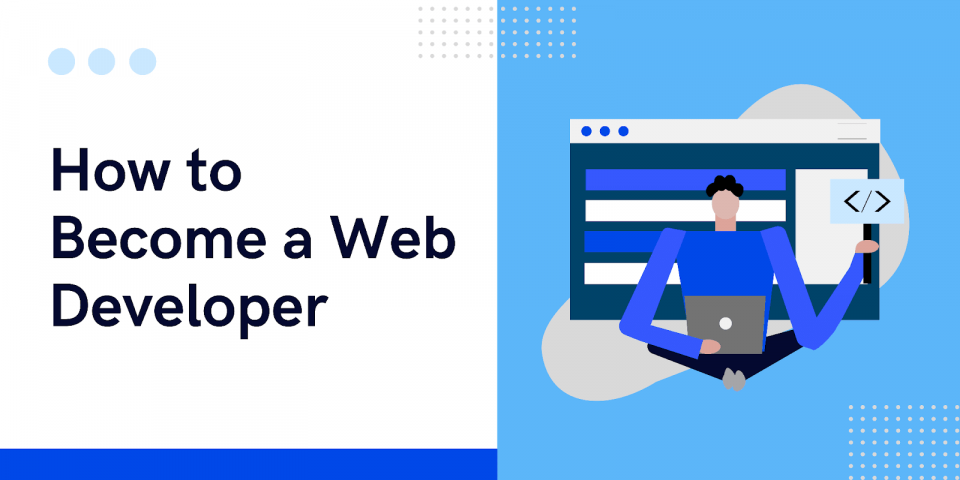 So you’d like to know how to become a web developer? Fortunately, there’s no shortage of resources on the subject. Becoming a good web developer is a matter of learning, time and above all practice through building projects.

You also have several options including front-end, back-end and, if you want to round yourself out, full-stack development - which is just both front-end and back-end development. The career opportunities are strong and you can get yourself a paying role in a comparatively short amount of time, at least compared to other programming roles.

In this article, we’ll cover what coding is, the most popular programming languages and some generalities about a career in web development.

Is it Still Worth it Becoming a Web Developer in 2023?

Of course, the first question you’ll be asking yourself if you’re making a career change is whether it's worth it. Does it pay well enough and will you find opportunities? After the terrible time that was 2020, this becomes even more important.

Fortunately for those looking to become a web developer, even following the COVID-19 pandemic, the prospects for a career look good. In fact, the US Bureau of Labor Statistics projects a 13% growth for the career over the next decade, which is much higher than average.

Your salary will vary according to the programming language you specialize in and the role you take on. But the 2020 median pay for a general web development role is $77,200 per year, according to the BLS. This is far higher than the media annual wage of $41,950.

Is it Difficult to Become a Web Developer?

The simple answer is no (and also difficulty can mean different things to different people).

There have been tens of thousands, if not hundreds of thousands, of individuals who have learned web development from scratch. It is not difficult, but it will ask of you patience and rigor. In fact, web development is among the easiest programming-related roles that you can take up. The question you should be asking is, “Will I enjoy being a web developer?”

What distinguishes the successful is the fact that they stuck to their learnings, even when it might have seemed too frustrating for them. The software career is fraught with moments when you’ll feel like you don’t know what’s going wrong so, if anything, running into roadblocks and you figuring it out is simply training for the real job. Debugging is an important part of the process and one you should get used to.

What Education Do You Need to Become a Web Developer?

Specifically, you will need to learn about HTML and CSS, and later on programming languages like JavaScript, Python, or Ruby on Rails - among several others - depending on the specific route you are taking on your web development path. Later on, you’ll learn about frameworks like React and Node, and many other ancillaries but very important parts of the web development experience.

How Long Does it Take to Become a Web Developer?

This can vary depending on the time you spend dedicated to learning and your own capacity for web development. Generally speaking, expect to “get” the web development process from about 3 to 6 months (maybe even less). You should be building your first major project in about 6 months, give or take a few months.

In about 12 to 18 months, you could find yourself in a position to apply for your first role! This will depend on how skilled you’ve become and if you have projects in your portfolio to demonstrate your capabilities.

Don’t take any of the timeframes mentioned here to be the ultimate truth when it comes to how long it takes to become a web developer. There are a lot of variables at play, and you might find your own journey deviates wildly from said timeframes.

What you should be focusing on is learning and becoming a little better everyday, and working on projects worth demonstrating.

How to Become a Web Developer [Step by Step Guide]

The steps to becoming a web developer are in and of itself quite simple - it’s the effort and time that you put in that makes all the difference. On a high level, this is the journey you’ll take to become a web developer from scratch: Learning HTML and CSS is easy and it can even be done within a week - that is the basics. By that, we mean how to structure a web page so that content goes in the right places and designing it so it looks acceptable.

It’s important to know how the web works, so don’t skip that. There are several resources available on the subject. As for HTML and CSS, you’ll find that many web courses, including the ones we refer to here, include the two in their courses.

Now you should know how the web works and how to build a basic website. At this point, you’ll be faced with the question of should you become a front-end or back-end developer? You should be able to grasp the difference if you’ve learnt how the web works.

A front-end developer works on what you see when you browse the internet. They take designs from the UI/UX team, create the web page and its style, along with interactive elements via JavaScript and JavaScript frameworks.

A back-end developer focuses on what goes on behind the scene, including the databases, the handling of server requests, and creating related applications.

There is one more web development role: the full-stack developer. These developers simply have both front-end and back-end skills, and can serve both roles.

Now before we detail the many programming languages that have utility in the web development field, we want to preface it by saying that, for the most part, you should be learning the markup languages HTML and CSS and then JavaScript. You can use these three, which are the most common, to build projects that can see you through your first interviews.

There are several other languages that are used in the field, each with their own particular capabilities and prominence in specific applications. These are:

For now, focus on HTML, CSS and JavaScript. As you become more knowledgeable and have a few demos to show, you can begin to branch out and specialize.

You will also need to know SQL, or Structured Query Language, to work with databases. This is not very difficult, or not exactly a programming language, but it is an indispensable piece of knowledge that teams will expect you to know.

Step 4: How to Learn Web Development

Now that you have a vague idea of what specialization you like, and the general programming languages, you need to actually get to work.

The good news is that there is no end to the courses at your disposal to learn web development. Many of them are free, though the certification programs do offer the added benefit of giving you a certificate to prove your credentials (which is by no means mandatory).

There is really no dearth of web development courses, so simply google them and you’ll see several pop up. You could also take a look at resources available on Hackr.

With the basics in your bag, and an understanding of how to apply HTML, CSS and JavaScript to structure, design and build a working application, you should start working on projects. It needn’t be anything too complicated but do put an emphasis on going out of your comfort zone.

These projects will become a part of your portfolio, which you will present during interviews. You can be sure that your interviewers will question you on your build - the development process, the challenges you faced and how you overcame them, and the general thought process behind your work. This will also teach you about the all important debugging process.

You should build a handful of these projects that challenge different skill sets before preparing to send out an application - which happens to be the final step!

With a portfolio of projects under your belt, you’ve got a good chance to land a web development position. There’s no end to the platforms you can send these applications.

But remember, keep learning and working on projects as you apply for positions - the learning never ends in a field where new developments happen regularly.

The Tools You Need for Web Development

At first, you might not even need any tools to start coding, as many courses offer browser-based environments to run your code. However, as good practice for a potential career, you should download a code editor. There are several free options available, and among them are Sublime Text, Atom and Vim. We recommend Sublime Text or Atom for beginners.

There are several other nifty tools to make the web development and design tools that make the process easier, but you’ll get to know those in due time.

It’s Never Too Late to Code

At 82 years, Masako Wakamiya is one of the oldest coders on the planet. When she first began to write code, she was using the abacus for Math. Today she is one of the world's oldest iPhone app developers, a trailblazer in making smartphones accessible for the elderly

If you’d like to spend more time learning web development, check out some of the courses you’ll find on Hackr.

What is Web Development? The Ultimate Guide
Read More