What is Web Application Architecture? Components, Models, and Types 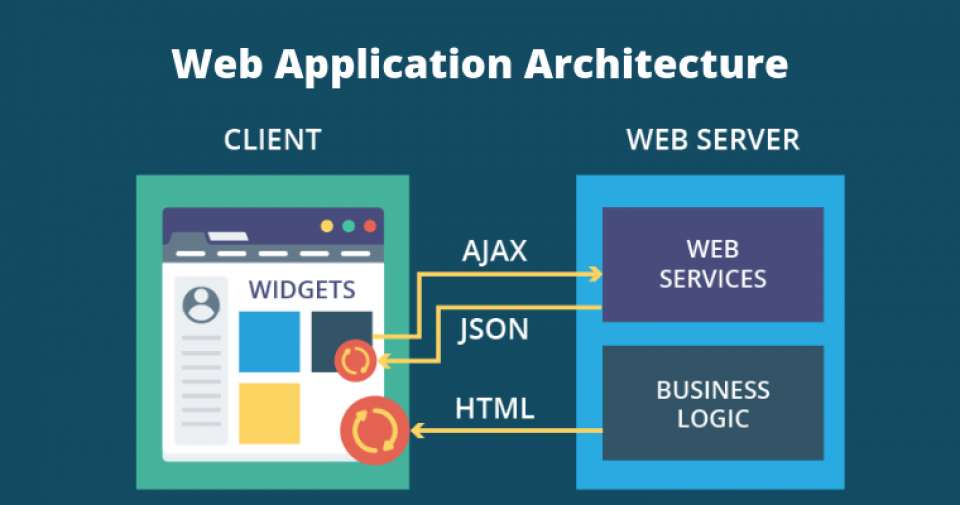 The Internet is no longer about static web pages and longer loading times. Over time, the Internet has made a shift towards active user engagement as well as extended functionality by means of visually pleasing and powerful web applications.

A web application is just like a normal computer application except that it works over the Internet. As everyone is on the web these days, most developers are looking to benefit from web apps and attract as many users as possible via opportune offerings.

What is Web Application Architecture?

The web application architecture describes the interactions between applications, databases, and middleware systems on the web. It ensures that multiple applications work simultaneously. Let us understand it with a simple example of opening a webpage.

As soon as the user hits the go button after typing a URL in the address bar of a web browser, it requests for that particular web address. The server sends files to the browser as a response to the request made. The browser then executes those files to show the requested page.

Finally, the user is able to interact with the website. The most important thing to note here is the code parsed by the web browser. A web app works in a similar way.

This code might or might not have specific instructions that tell the browser how to respond with respect to the different types of user inputs.

Hence, a web application architecture has to include all the sub-components as well as the external applications interchanges for the entire software application, in the aforementioned case, which is a website.

The web application architecture is indispensable in the modern world because a major portion of the global network traffic, as well as most of the apps and devices, make use of web-based communication.

A web application architecture has to not only deal with efficiency, but also with reliability, scalability, security, and robustness.

How Does It Work?

With any typical web application, there are two different codes (sub-programs) running side-by-side. These are:

A web developer (team) developing the web application decides as to what the code on the server will do with respect to the code in the browser. For writing server-side code, C#, Java, JavaScript, Python, PHP, Ruby, etc. are used.

Any code that is able to respond to HTTP requests has the ability to run on a server. The server-side code is responsible for creating the page that the user requested as well as storing different types of data, including user profiles and user input. It is never seen by the end-user.

A combination of CSS, HTML, and JavaScript is used for writing the client-side code. This code is parsed by the web browser. Unlike the server-side code, client-side code can be seen as well as modified by the user. It reacts to user input.

The client-side code communicates only via HTTP requests and is not able to read files off a server directly.

When we say web application components, we can mean any of the following two:

Depending on the total number of servers and databases used for a web application, the model of a web app is decided. It can be any of the following three:

1. One Web Server, One Database

It is the most simple as well as the least reliable web app component model. Such a model uses a single server as well as a single database. A web app builds on such a model will go down as soon as the server goes down. Hence, it isn’t much reliable.

2. Multiple Web Servers, One Database (At a Machine Rather than the Web server)

The idea with this type of web application component model is that the webserver doesn’t store any data. When the webserver gets information from a client, it processes the same and then writes it to the database, which is managed outside of the server. This is sometimes also referred to as a stateless architecture.

At least 2 web servers are required for this web application component model. This is all for avoiding failure. Even when one of the web servers goes down, the other one will take charge.

All requests made will be redirected automatically to the new server and the web app will continue execution. Hence, reliability is better as compared to the single server with inherent database model. However, if the database crashes the web app will follow to do the same.

It is the most efficient web application component model because neither the webservers nor the databases have a single point of failure. There are two options for this type of model. Either to store identical data in all the employed databases or distribute it evenly among them.

Not more than 2 databases are required typically for the former case, while for the latter case some data might become unavailable in the scenario of a database crash. DBMS normalization is used, however, in both scenarios.

When the scale is large i.e. more than 5 web servers or databases or both, it is advised to install load balancers.

There are three primary types of web application architecture. Each one of them is explained as follows:

In order to ensure a web application is able to give out maximum performance, a galore of points should be kept in mind during its development. The web app must:

The robustness, responsiveness, security, etc. of a web application is greatly determined by the model and type of web application architecture one chooses. Hence, before getting started with the development, take time to explore all requirements, goals, and possibilities.

Do you have any web application development experiences that you would like to share with the community? Or something to say about the article? The dedicated comment window is always open.

I wish you luck with your next web development project!

Software engineer, hardware enthusiast, writer by avocation and a gamer. Swapnil has been working on Hackr for a large part of his career. Primarily working on Laravel, he is also the author of our React Native Android app. When not in front of a screen, you will find him devouring a novel or listening to heavy metal. View all posts by the Author

Thanks for sharing a good article with us. My all points are clear now about related to web application development and architecture.

Hi Swapnil, thanks for the article, very clear n to the point. Is there a beginners book, web learning course or tutorial u could suggest to get up to speed with web app architecture?
Thanks, Ste

Nice and useful article and

I am very new to this concept of Web Application Architecture. Can you please direct me towards an even more simpler explanation of the same.

Hi, great article you put up, I really enjoyed it. However there's something you didn't mention, a scalable monolith architecture