PHP and Back End Development

Posted in PHP, Back End Development 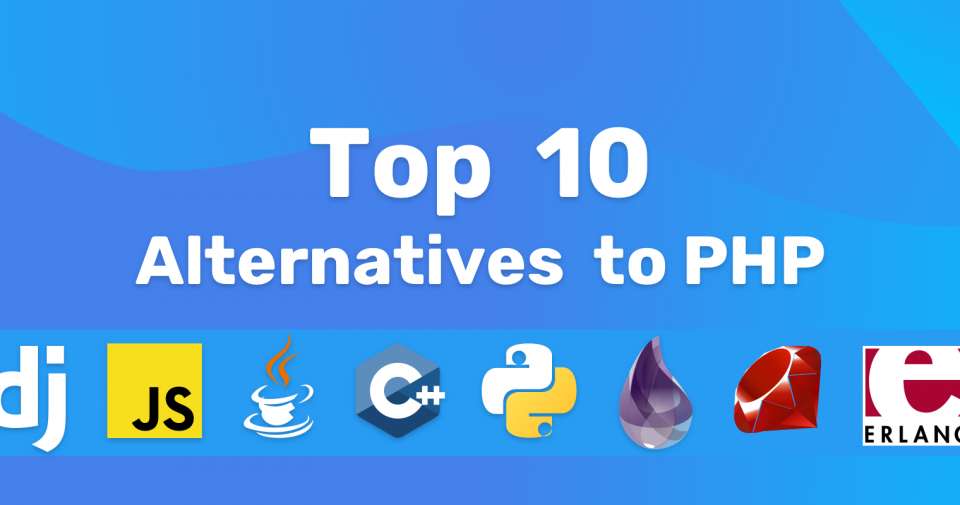 PHP has been one of the oldest and most used scripting languages for server-side development, and it’s powering over more than 42 million sites today on the world wide web, according to SimilarTech. PHP has certainly grown so much and matured over the course of 25 years, and the latest major release, PHP7 brought along many enhancements to the performance, boosting speed to up to 100% of that of PHP 5 and lowering the memory usage. PHP Composer is also said to be one of the best third-party package managers today, and the language now possesses a handful number of powerful frameworks, including Laravel, Symfony, Zend, and CodeIgniter. But the technologies are always changing, and some have even overthrown the PHP reign and opened doors for new opportunities to come. For those who never felt comfortable with PHP or who want to get a grip of new technologies, here are 10 alternatives for PHP that you can use for server-side development:

Node.js is currently the hottest technology in web development; it’s a run-time environment for Javascript on the server side, simply put, it allows Javascript to be used for server-side development. Now, this wouldn’t be enough to make it as popular as it is, the real state-of-art in this technology is the fact that it runs asynchronous code on the server. This boosts up the server’s performance, making it faster, and able to handle more requests/connections

The node community is growing very fast, and the node package manager (NPM) boasts the highest amount of packages with 650,000+ packages available for you to build your applications.

Java is an all-time favorite for many developers, and it reigned the software development scene for quite some time. Java is quite fast by nature, and since it’s strongly typed, it provides a better development experience writing less-buggy code. Many frameworks use Java for server-side development like Spring and JEE.

Believe it or not, Python is now being used more than PHP in server-side development, and for good reasons too. The Django framework is currently very famous among beginners and professionals alike. Python is a fairly easy language, perhaps the easiest on this list and Django is bundled with features, being a batteries-included framework that brings so much power to the developer’s hand. Also, many organizations prefer using Django as it capitalizes on security and scalability. Not to forget Flask, of course, one of the most loved Python frameworks, as it’s minimal, easy to pick up and extremely flexible.

Ruby is a powerful dynamic language, that is extremely beginner-friendly and focuses on simplicity and productivity. There’s an ongoing debate on whether it’s easier than Python or not, but let’s just say they are of approximately the same level. Rails, an MVC Ruby web development framework, took the language to new heights and become the go-to framework for many developers as it focuses on rapid prototyping and Convention-Over-Configuration pattern. Rails is not the only ruby framework out there, there are Sinatra, Cuba, Hanami and a few others.

Microsoft’s products for web development might not be the get-go for many developers and aren’t really the most popular either. However, they are a strong option in terms of features and performance. ASP.Net Core is the next generation of their most famous ASP.Net web framework. ASP.Net is powering over 17 million pages on the web and it’s used by Microsoft and Xfinity among others. If you’re familiar with Java or C++, C# will be quite intuitive to you, and if you’re already familiar with C# then ASP.Net is definitely an option for you.

Erlang is one of the most powerful options on this list. It’s a concurrent functional programming language that was designed specifically to handle the massive amount of traffic in real-time applications. Reliability and availability in Erlang are of great importance, to the extent that adding new features might be done seamlessly while the application is handling the mass amount of transactions. While it might not be the best option for HTML generation, it’s certainly ideal for building REST API on your backend.

Elixir is a dynamic functional programming language the utilizes the Erlang virtual machine. It was designed for concurrency, scalability, and simplicity and invented by a Rails core member. Elixir possesses a rich framework called Phoenix, but it’s relatively young compared to other languages and hence you might need to write things from scratch. Elixir and Phoenix also account for flexibility and scalability, the creators also said that they were able to serve 2 million users simultaneously which opens the door for new possibilities that might not exist in other frameworks.

It might be a surprise to you, but there’s nothing out there that C++ can not do, and that includes web development. There are actually numerous web frameworks that you could choose from, and in terms of performance and speed, they might even be faster than your typical frameworks. However, note that deployment might be a little bit of a problem, but they’ll certainly be fun to experiment with. The most famous frameworks are WT, their official page is made using the framework and Crow, which is C++’s version of Flask, a mini web framework.

Since Rust is a popular language and a very beloved one, we ought to mention that you can develop web applications using Rust. Even though the language isn’t mature enough to replace frameworks like Rails, Django and Laravel, it has the basic features and as far as API service with a client-side architecture, it could do the job. Since RUST is a secure language, most of the dangers in web development might be eliminated just by using the language.

Which PHP alternative did you like the most? Which one are you going to use?

What is PHP? Learn All About the Scripting Language
Read More

But how easy are these alternatives to run on the server?

I use PHP for basic stuff only because I know it will just run on most shared hosting without installing anything else.

There is noticeably a bundle to know about this. I think you made various
nice points in features also.

Love your resources! I appreciate your details and depth writing style and all your eye cache points was so awesome.

thanks youssef for the effort
very useful and to the point

Thank you for this information.

Where the fuck is PErl?

"Since RUST is a secure language, most of the dangers in web development might be eliminated just by using the language."

What specifically is wrong here? Curious to know.

You writes "The team that created the language also made one amazing IDE which is a very important factor in the development process". I do not know of any IDE created by Google or team behind Go.

Thanks man. Very good overview for me as well as fair, unbiased and well reasoned. Cheers!

PHP for Beginners (www.udemy.com)
PHP The Right Way (www.phptherightway.com)
PHP Front To Back (www.youtube.com)
Welcome Back
Continue with: