What is Web Development? The Ultimate Guide 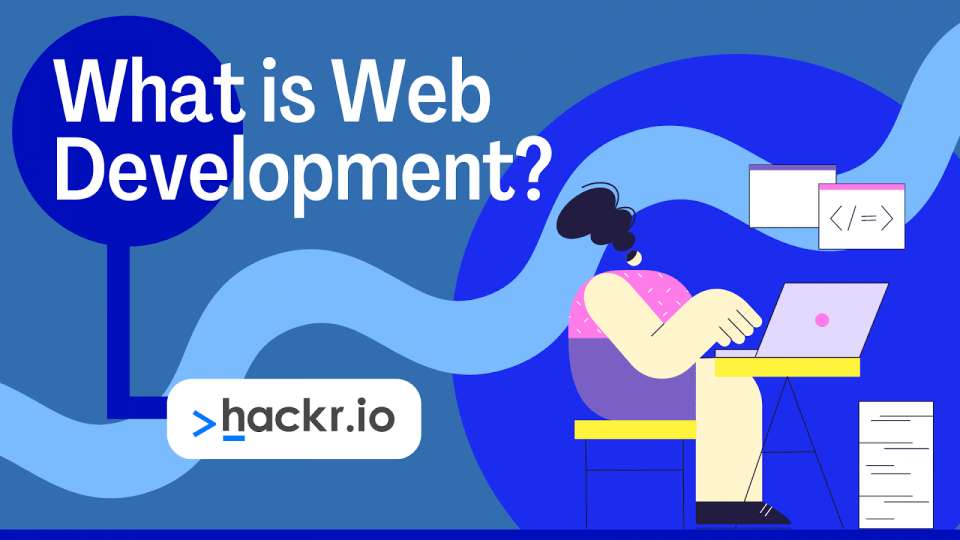 Every website you've ever used, from Google to Facebook, was developed by someone. But what is web development?

Web development refers to all tasks associated with developing websites or web applications, even though the same developer or team may not complete all these tasks independently.

Web development can range from developing a simple, static page of plain text to complex web-based internet applications, such as eCommerce websites. As a career, web development is popular because it doesn’t require formal education. You can become a web developer with the help of bootcamps, tutorials, and practice.

A Brief History of Web Development

In the 90s, websites were just a few static pages of text and hyperlinks. Developers used HTML, a markup language, to format text and images into an easily digestible format. But the website’s goal was to impart information rather than create a dynamic or interactive experience.

By the mid-90s, JavasScript and graphical browsers had been introduced, adding interactivity and greater visual appeal to websites. Websites became dynamic and exciting, eventually becoming the complex solutions they are today. And while web development has undoubtedly become more advanced and complex, it's become even more accessible.

Faster internet speeds made website development more popular. Now, there are fewer desktop applications and more SaaS (software-as-a-service) solutions. Today, a web developer can work on anything from a social media site to a simple game.

Web development can refer to many things, from the website's initial design (look and feel) to dynamic elements. But the most basic definition of web development is developing a website for the web.

Front-end web development, also known as client-side development, is developing the parts of a website that users will see and interact with. This includes the graphical interface (or "look and feel") of a website as well as the function (or interactivity).

HTML, CSS, and JavaScript are typically used to create the front end of a website. These technologies create a website's structure, style, and function. Below, you can see how HTML and CSS are used together to create a header that is also blue: Back-end web development, also known as server-side development, is developing the parts of a website that users don't see. This includes the website or web application’s functionality and the database and server configuration.

PHP, Ruby on Rails, and Node.js are commonly used to build back-ends. Increasingly, developers are also using Python. Back-end web development is typically known as "web programming." Still, while it’s essential to the development of website behavior, it's not any more or less complex than front-end development.

Full-stack web development refers to developing both the front-end and back-end components of a website. A full-stack developer can develop a web application on both the client and server sides.

In desktop application development, C++ and Python are commonly used. What are the programming languages most commonly used in web page developing?

HTML, or HyperText Markup Language, is the standard markup language for creating web pages and web applications. Developers use HTML to structure a web document (described by HTML tags) and apply styling to format the content (with CSS).

CSS, or Cascading Style Sheets, is a style sheet language used for describing the presentation of a document written in HTML or XML. Developers use CSS to style all HTML tags, including the document's body, headings, paragraphs, and other pieces of text.

JavaScript is a high-level, interpreted programming language. JavaScript makes sites dynamic and interactive. Developers use it for front-end and back-end development, making it equally popular with full-stack developers.

PHP is a general-purpose scripting language especially suited to server-side web development. It's used for back-end web development; the PHP code compiles HTML/CSS/JavaScript code, which is then sent to the browser.

Python is a widely used high-level, interpreted, general-purpose programming language. Its design philosophy emphasizes code readability, and its syntax allows programmers to express concepts in fewer lines of code than languages like C++ or Java. While Python is an older language, it's recently seen a significant resurgence due to AI and machine learning.

Website programming doesn't happen in a vacuum. Many tools assist with webpage development, including frameworks, compilers, and optimization tools. With the right tools, webpage developing is faster and more reliable.

Frameworks are like templates. They provide a structure for your code, so you don't have to start from scratch every time you create a new webpage. Angular.JS is a popular framework, as is React Native.

UI Kits are like a toolkit for your website interface. They provide a set of pre-made, reusable components you can use to build your UI. Bootstrap is one of the most popular UI Kits. A UI Kit is also a framework but primarily for user interfaces.

A code repository is a place where software developers can store and share code. Github is the most popular code repository. Github allows multiple people to work on the same code simultaneously.

A code compiler is a program that translates code from one programming language to another. CodePen is a popular code compiler that allows you to write and share HTML, CSS, and JavaScript code snippets.

Optimization tools make your code run faster and take up less space. SASS is a popular CSS optimization tool. It's a superset of CSS that makes optimizing and improving your CSS code easier.

As we discussed, web development means many different things. Depending on your focus and interest, you can pursue various careers in web development. Let's look at some of the most common career paths, opportunities, and pay scales.

A UX designer is responsible for the user experience of a website or web application. They work to create a site that is easy to use, visually appealing, and conducive to the goals of the business or organization. According to Salary.com, a UX Designer can expect to make around $99,000 on average.

Front-end developers work with HTML, CSS, and JavaScript to design the appearance and function of websites. Frequently, they are also designers—but that's not always true. According to Payscale, a front-end developer can expect to make around $77,000 on average.

Other Types of Development

Web development crosses over into various development practices. Cloud development and SaaS solutions have somewhat muddled what is considered "web" development. "Web development" can refer to a website, but what about when websites are used for other things?

Native mobile apps are coded in specific languages such as Swift (for iOS) and Java (for Android). Mobile development can be a good entry point into the field of web development because the skills are transferable.

There are technologies such as Progressive Web Apps that blend both web development and mobile development. There are also development kits and frameworks, like Ionic, that let you create mobile apps with HTML, CSS, and other web technologies.

SaaS, or software as a service, is web development that focuses on creating software delivered over the internet. SaaS developers build applications that are typically subscription-based and can be accessed by users anywhere in the world. So, if you see SaaS development, just know that this is a popular type of web development, too.

How to Become a Web Developer

It's not hard to become a web developer. It’s generally a matter of practice and familiarity with the technology, tools, and programming languages.

To become a web developer, you will need to:

Now that we’ve covered the web development meaning and specializations, it’s time to put the knowledge into practice. The web development field has a projected growth of 13% — much higher than average. There are incredible opportunities for those who enjoy web development and many different focuses within the career path.

1. What is Web Development (with Example)?

An example of web development would be setting up a WordPress account to have a live blog on the internet. You would install WordPress and customize it to your personal needs and style. In doing so, you'd be "developing for the web."

2. What Does Web Development Do?

Web development, at its most basic level, is creating any website. This includes everything from the initial coding to setting up a database and e-commerce functionality.

3. Which Language is Best for Web Development?

4. How Can I Learn Web Development?

Web development is easy to learn and difficult to master. You can begin by creating a starter project with HTML and CSS. One of the easiest projects to start with is an online resume. Follow an online resume tutorial to learn how HTML and CSS format text on the screen.