Ruby vs Python in 2022: The Differences You Should Know 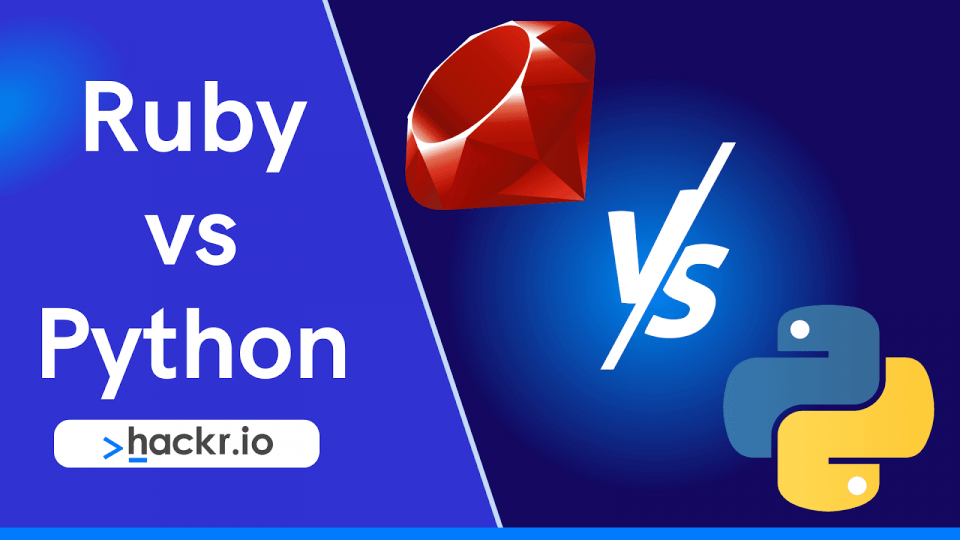 Between Ruby and Python, which one is the better programming language?

The programming world has evolved exponentially in the last few years. With the growing demand for everything digital, it is essential to know which programming language is well suited for which kind of requirements. A couple of decades ago, Java and .NET were the two most popular languages. Needless to say, times have changed!

In current times, it is essential to update ourselves with more comfortable and friendlier languages like Python and Ruby, amongst others. In this article, we’ll talk about Ruby, Python, and their respective frameworks to better appreciate each. Then, we’ll see the battle of Ruby vs Python to find out which programming language comes out on top.

Let’s get right to it!

Key Differences Between Ruby and Python

When it comes to the difference between Python and Ruby, there are a few key points you may want to consider.

Ruby is one of the most common and popular general-purpose languages to create web applications. Rails or Ruby on Rails is an elegant and robust framework that is built on the MVC architecture and has loads of libraries and in-built functions, so that you don’t have to develop everything from scratch and can focus on the specific business requirements alone. Rails have some of the big names in its kitty – Shopify, Airbnb, GitHub are all built with Ruby on Rails.

Coding in Ruby is just like talking with another human – expressive and easy to comprehend. There are no primitive types in Ruby – everything is about objects! A simple Hello World program is a single line,

Syntax of Ruby is mostly similar to languages like C or Perl.

Most startups and companies that want a robust digital presence prefer Ruby as it is quick to build scalable and robust web applications with Ruby. The Ruby community is also web-focused.

Pros and Cons of Ruby

Python is the most popular language, and the popularity also comes from the fact that it is the preferred language for data scientists. It has an extensive set of statistical libraries that can be used for data science, which is the most popular career today. This also makes it a popular language amongst students learning statistics and data modeling.

Python is easy to learn, and if you are a novice, Python is a great way to start your programming journey. The programs you write will be just like writing plain English – evident and straightforward.

Python is open-source. You can download PyCharm and start learning Python almost as soon as you want to! Just like Ruby, a simple ‘Hello World’ would be only one line code –

Notice the use of print as opposed to puts in Ruby, and the absence of a semicolon to end the line.

In Python, white spaces are significant and indicative of a block of code. For example,

Python only supports Lambda, an anonymous function that can evaluate a single expression with any number of arguments. For example,

Many frameworks support Python, of which the two most popular are Django and Flask, which enable developers to build robust web applications. However, Python’s power lies beyond just web applications – there are libraries like Pandas that help in data preparation and munging, math libraries and statistical libraries that help in data interpretation, TensorFlow for machine learning tasks, and Matplotlib for data visualization – all that you need for Data science is right there!

Pros and Cons of Python

How are Ruby and Python Similar?

Is Ruby similar to Python? In some ways, it is. There are a few things that are similar between the two programming languages. These similarities can muddy the waters a bit and make it difficult to answer the question, “should I learn Ruby or Python first?”

How exactly are these two languages the same? Some standard features of Ruby and Python are: The Difference Between Ruby and Python: The Popularity Contest Looking at both these graphs, it’s easy to see that Ruby and Rails are stagnated or even losing popularity. Meanwhile, Python has skyrocketed to the top, along with Django. Which One Should You Learn First?

The combination of Django and Python can seem a bit too complicated at first. Fortunately, it’s not really required if your intent is to bring a web app into the market as soon as possible.

If you’re looking to develop web apps, you may want to learn Ruby (and Rails) first. Rails is one of the best frameworks for web application development today, and you’ll find that the community around it provides excellent support to help you solve problems you may encounter along the way.

However, even if you are first learning Ruby and Rails, it is good to get into Python when you have the time, as it is more suitable for scientific computing and data science. Since data science careers are going to rule the next couple of decades, Python will have more demand. Besides, it is easy to reuse Python code across applications.

Both languages are unique and have their features, and it is always good to learn multiple languages to showcase a better resume! If you’re not sure how to tell the difference between the two, it may help you to look at some Ruby vs Python code examples to help you figure it all out.

Python vs Ruby: Which One is Better for Beginners?

If you’re an absolute beginner looking to dip your toes into the world of development, it may be challenging to figure out which language to learn first.

Many people tend to start with Ruby and Rails simply because it’s one of the best tools available for creating web applications today. For those who don’t necessarily intend to develop web applications on a commercial level, Python (and Django) may be the better option.

Python tends to have syntax that is easier to learn and understand. Ruby, on the other hand, tends to be the “more enjoyable” option (though this is quite subjective depending on the developer). People tend to gravitate toward learning Ruby first as it’s quite a popular language with startups — so your chances of getting hired are a bit higher!

As we have seen, both Ruby and Python are high-level, object-oriented programming languages that were written for specific purposes. The decision of which one to learn first is purely based on your business needs. Of course, it is also a personal choice.

We hope that this head-to-head Ruby vs Python battle has helped you figure out which language suits your needs best. If you’d like to learn either of them, Hackr.io offers some great tutorials for learning Ruby and Python, which you can access here:

1. Is Ruby better than Python?

This question can set off a great debate that can easily devolve into madness. If you look at Python vs Ruby, they certainly have their similarities. However, Python is often better when it comes to educational use and for making quick apps and programs, while Ruby is usually the choice for those who want to make commercial web apps. The choice depends on your (or your project’s) needs and ultimately comes down to personal preference.

2. Which is easier, Ruby or Python?

3. Which is more popular, Ruby or Python?

When it comes to use in web development, Ruby is generally much more popular. Python tends to be more popular for use in academic and scientific circles and purposes.

4. Can you use Ruby and Python together?

Yes! It is certainly possible to use Ruby and Python together. If you’d like to know more about how Ruby and Python can work together, you can look at this article. It even includes an example!

5. What can Ruby do that Python can’t?

Quite honestly, both Ruby and Python tend to be interchangeable — what Ruby can do, Python can also do. The choice in Ruby versus Python is the developer’s to make. However, in many cases, developers tend to favor Ruby simply because of Rails.

6. Is Ruby good for beginners?

Ruby can be quite good for beginners, especially as it’s designed to help enforce good coding habits from the very beginning. It’s open-source, so you can use it for free whenever you need it. It’s simple and also allows for fast development, so you can get your first project up and running quite quickly.

Ruby, like PHP and Python, are back-end programming languages.

Is Ruby good for beginners?

Well, it totally depends on how much programming experience you have. It is easier to learn but you will face some complexities while you move into deep metaprogramming. It is the easiest framework to learn if you have programming hands-on. There is a lot to explore for beginners and they will find it a little bit complex.

Ruby is much like JavaScript but Ruby is much easier than JavaScript in many ways. Ruby syntax is intuitive and ruby is more imperative than JavaScript. Ruby with its easy syntax makes it user and programmer friendly. Ruby is also object oriented with many interesting modules that can be reused.

Is Ruby front end or backend?

Ruby is a back-end language. Backend developers mostly focused on site speed and its responsiveness and using Ruby is a great option. Ruby is used to create dynamic websites which store database information that keeps on changing and updating.

Is Ruby on Rails obsolete?

No, Ruby on rails is not dead. Many organizations are still using it due to its performance, convenience and readable syntax. In order to learn something new many developers are preferring ruby on rails. It is practical and offers libraries and tools that help in making the development faster.

Why is Python faster than Ruby?

The reason python is much faster than the ruby is that the python code is being compiled into bytecode that is executed by VM while in Ruby code the AST’s are traversed every time we run the code. Python converts the AST’s into byte code so there is no need to traverse AST’s every time that saves most of the time.

How is Ruby different from Python?

Both platforms are built using different programming languages. Both are high-level and server side language that focus on simpler codes. Python is basically a prototyping language that can be easily translated to C++. While ruby mostly focuses on human language programs and its code is like English language which makes it popular among programmers.