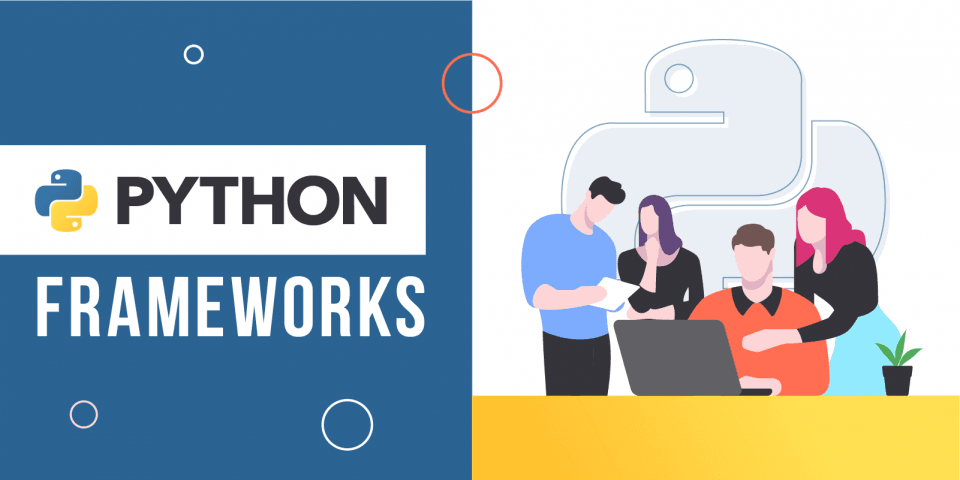 What do Python programmers need to make their life easier? The answer is frameworks. By automating the implementation of redundant tasks, frameworks cut development time and enable developers to focus greatly on application logic rather than routine elements.

Because it is one of the leading programming languages, there is no scarcity of frameworks for Python. Different frameworks have their own set of advantages and issues. Hence, the selection needs to be made on the basis of project requirements and developer preference.

Such frameworks are a one-stop solution for all developer requirements. Form generators, form validation, and template layouts are usually available with a typical full-stack framework.

These are lightweight frameworks that don’t offer additional functionalities and features, such as database abstraction layer, form validation, and specific tools and libraries. Developers using a microframework need to add a lot of code and additional requirements manually. Type – Microframework Bottle creates a single source file for every application developed using it. It is one of the best python web framework.The microframework for Python was originally developed for building APIs. Other than the Python Standard Library, Bottle has no dependencies required for crafting small web applications. One of the most important advantages of using Bottle is that it allows developers to work closer to the hardware. In addition to building simplistic personal-use apps, Bottle is an apt fit for learning the organization of web frameworks and prototyping.

Type – Microframework CherryPy is a popular open-source, object-oriented Python framework that follows a minimalistic approach. The micro-framework is one of the oldest Python frameworks, debuting in the June of 2002.

Any CherryPy-powered web application is a standalone Python application with its own embedded multi-threaded web server and runs on any OS with support for Python. Such an app can be deployed anywhere an ordinary Python app is able to run.

There is no need for an Apache server for running apps developed using CherryPy. The micro-framework allows the developer(s) to make use of any type of technology for data access, templating, et cetera.

Type – Full-stack framework Developed and curated by Logilab, CubicWeb is a free-to-use, semantic, open-source, Python-based web framework. Based on the data model, CubicWeb requires to have the same defined in order to develop a functional application.

Unlike other popular Python frameworks that use separate views and models, CubicWeb makes use of cube. Multiple cubes are then joined together for creating an instance with the help of a database, a web server, and some configuration files.

Type – Microframework Dash is an open-source Python-based framework for building analytical web applications. It is an ideal Python framework for data scientists that aren’t much into the mechanics of web development.

Applications designed with Dash are web servers that run Flask and communicate with JSON packets via HTTP requests. Their frontend renders components using ReactJS. Flask plugins can be used for extending the capabilities of Dash.

Because Dash apps are rendered in the web browser and can be deployed to servers, they are cross-platform and mobile-ready. Dash developers are provided access to the underlying Flask instance as well as all of its configurable properties.

Unlike others, the free-to-use and open-source full-stack Python framework include a grand number of built-in features rather than offering them as individual libraries. Django makes use of its ORM for mapping objects to database tables.

This results in allowing the code to work across different databases as well as making it easier to migrate from one database to the other. Though Django has inherent support for MySQL, PostgreSQL, SQLite, and Oracle Database, it can support other databases via third-party drivers.

Check out the advantages and disadvantages of using the Django framework. As per the benchmark test conducted by Sanic, Falcon is able to handle most requests with the same hardware than all its contemporaries. The Python framework aims to have 100% code coverage. Falcon is used by big players like LinkedIn, OpenStack, and RackSpace. Type – Microframework Available under the BSD license, Flask is another popular Python framework. Inspired by the Sinatra Ruby framework, the microframework requires Jinja2 template and Werkzeug WSGI toolkit. Thanks to its lightweight and modular design, Flask is readily adaptable.

Flask allows the developers to build a solid web application foundation from where it is possible to use any kind of extensions required. The micro-framework is compatible with Google App Engine.

Looking to learn Flask? Check out these Best Flask Tutorials.

Type – Full-stack framework Based on the Model View Controller pattern, Giotto is an application framework for Python. In order to allow web designers, web developers, and system admins to work independently, Giotto separates Model, View, and Controller elements in order. Type – Asynchronous framework Inspired by the NodeJS and the Express/Connect frameworks, Growler is a micro web framework written atop the Python’s asyncio library.

Unlike other conventional Python frameworks, requests in Growler aren’t handled in the framework but by passing through middleware technology.

A top choice among Python frameworks for easily and quickly implementing complex applications, Growler was originally developed by its author to simply learn how to use asyncio library at its lowest levels.

The Hug is designed to allow Python developers to develop an API once and then use it anywhere they wish. The Python framework simplifies API development by means of offering multiple interfaces. It is labeled as the fastest web framework for Python 3.

Whether you are doing local development or over HTTP or via the CLI, Hug lets you complete application development quickly and easily. In order to take performance to the next level, Hug consumes resources only when required and uses Cython for compilation.

Type – Microframework Labeled as the “Super Powered Python Web Framework,” MorePath ensures minimal setup footprint. It is designed specifically for getting most of the typical use cases up and running ASAP, including the common Python data structures being induced into RESTful Web Services.

The microframework, MorePath, is a very flexible model-driven web framework. A unique feature available to the Python framework is that it automatically turns the paths defined in the framework into links in creating apps with the cleanest URLs.

Type – Microframework Pycnic is an object-oriented microframework believed to be the fastest for building JSON-based APIs. The small, standalone, and optimized for JSON-based APIs framework is able to hold its ground well among big players. Because Pycnic creates just the Web APIs, it has a minimal footprint and therefore, it is fast.

Type – Full-stack framework Pylons Framework is an open-source Python-based framework that focuses on the rapid development of applications. The framework is designed by incorporating some of the best elements and properties of languages including Perl, Python, and Ruby.

Although available in maintenance mode, several developers still use the Pylons framework due to its ability to offer a highly flexible structure for web development. In order to promote reusability, the full-stack framework makes extensive use of WSGI (Web Server Gateway Interface). Type – Full-stack framework The Pyramid is another leading Python framework. The primary goal of the open-source Python-based web development framework is to achieve as much as with minimalistic complexity.

The most desirable aspect of the Pyramid is the ability to work equally well with small as well as full-scale applications. Moreover, there is a multitude of resources available to extend its abilities as per the requirements call for. During a benchmark test with one process and 100 connections, Sanic was able to handle as much as 33,342 requests in a single second. The Python framework was originally developed for a company called FriendFeed, which was acquired by Facebook in 2009. The Tornado is an ideal tool for building apps asking for high performance and several thousand concurrent users. In addition to supporting a flexible and powerful ORM, TurboGears come with intelligible templating. The full-stack framework makes use of components such as Genshi, Repoze, SQLAlchemy, and WebOb to easily and quickly develop apps requiring database connectivity.

Type – Full-stack framework For Python developers looking for a scalable full-stack framework, Web2Py might be the answer. The open-source Python framework comes with its own web-based IDE, which includes a code editor, debugger, and one-click deployment.

Though Web2Py allow users to create dynamic web content in Python, it doesn’t provide support for Python 3. The ticketing system is one of the most important features of the Python framework. The system issues a ticket to the user whenever an error occurs.

In order to appreciate all (or most) of the above mentioned Python frameworks, you need to have at least intermediate competency in the high-level, interpreted programming language. If you are looking to learn Python or improve your Python expertise, Python for Everybody Specialization is a highly recommended course by the Python programming community.

Hey dude, very useful tech article. Actually I was searching for a detailed article like this to understand in a better way. This was a very detailed one.

The article was very nice .
We also have other frameworks and articles related to python development
Please do visit our website
https://eidk.org/Python-tutorials-eidk.html

Is there any other framework of Python other than Django for web development?

I think django and flask are two best frameworks

Hi Vijay, niece to hear about Python in an descriptive way, could you please tell me how Python is unique from other frameworks?

Hi,
First thing, python is not a framework, Python is a Programming languages, For more details about Python programming Languages you can read from our blog, About why Python is best compared to other programming languages is "Python's run time must work harder than Java's." To know more why, Go here: https://www.python.org/doc/essays/comparisons/

Outstanding post but I was wanting to know if you could write a litte more on this topic?
I'd be very grateful if you could elaborate a little bit further.
Cheers!

Is Numpy a framework?

NumPy is foundational library for scientific computing in Python and many of the libraries on this list use NumPy arrays as their basic inputs and outputs.

Which one is better Python Pyramid or Django?

Both are widely used frameworks of Python and both are open-source and free. Django is designed for high level web framework while Pyramid is a light-weight web framework.
Pyramid expect a project to be a single application with several views or modelswhile Django separates a project into individual applications.

Which server is best for Python?

WSGI (Web Server Gateway Interface) is the standard interface between web server and python web application frameworks. WSGI makes it possible to write portable codes in python that can be deployed in any WSGI-compliant web server.

What is the difference between Django and Flask?