The Difference Between Python 'is' vs '==' Operator [Easy Guide] 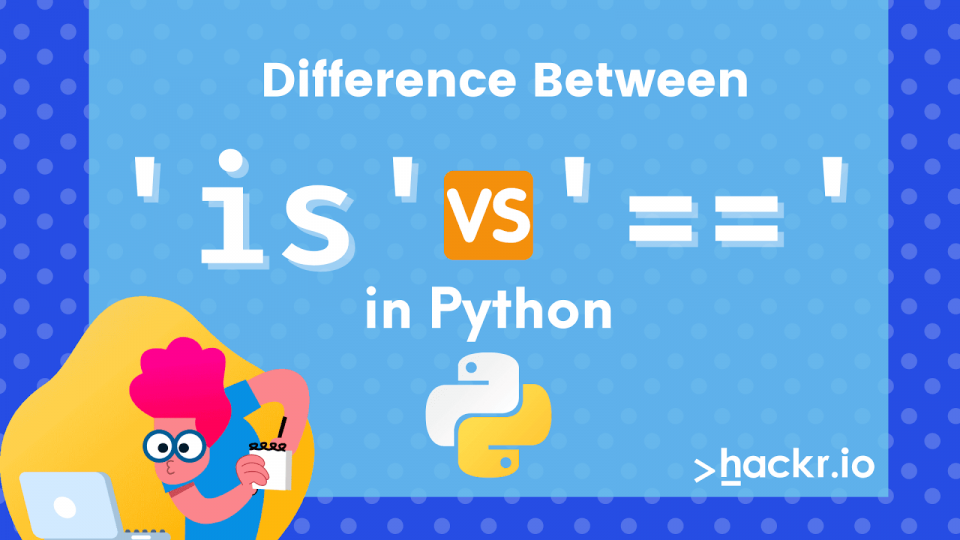 Python is a general-purpose, high-level, interpreted programming language. Gan Guido Rossum designed this language and released Python 0.9.0 in 1991. Python is well-known for its code readability and easy syntax, which uses simple English keywords and eliminates the use of semicolons and curly brackets.

This article will walk you through the key differences between Python “is” and “==”, along with their examples. Also, it discusses ‘is’ and ‘==’ separately to better understand.

What Is the “is” Keyword?

In Python, the variables that have the same values are all assigned the same object ID in the memory. Here’s an example of how the “is” keyword works:

The “is” operator will only work well when the variables are assigned with some values. Consider another example where we have two empty lists, as shown below. In Python, the two different lists will refer to two different objects with different memory locations, making both lists distinct.

You can see that the above output displays different values for both the list (l1 and l2) variables even though they are empty lists. Therefore, the output is false. To overcome this confusion, we jump to the (==) operator.

The above example, where we have compared the two empty lists using the (is) operator, did not provide the expected results. We will now try that example with the (==) operator:

The (==) operator will return the true value, as it will consider the object id while comparing.

The Difference Between Python “is” vs “==” Operator

Here’s the main difference between python “==” vs “is:”

The “==” operator will compare both the variables whether their values refer to the same object or not.

Both operators are used for comparing; however, their purpose is different. Thus, they are used in different scenarios.

In Python, everything is an object and is assigned some memory.

In this case, the interpreter will compare for its identity only and cannot be overruled. This means it will check if “a” refers to the None object and nothing else.

But with the following example:

The “==” operator will call the class a._eq_() method, which might work differently, depending on the interpreter, and provide a different result.

The Python interpreter will intern the smaller numbers at fixed memory locations. It means that the interpreter will substantiate these values only once. It will refer to its memory address whenever the object is referenced. The range of these numbers might vary depending on your interpreter ( -5 to +256).

Due to interning, we get the same memory location for 256.

But if we use the integer greater than the range, then the output may vary.

In the following example, we have used “var_a” to hold a list while “var_b” is a variable with the “a” value. Here, “var_a” and “var_b” both refer to the same object in the memory. You can use the “id” function to check it. Both variables will have the same id thus, a is b returns true.

Now, we will create a copy of the var_a variable using the slice operator. It will create a new object within the memory having a new address; thus, it will have a new ID.

Tus var_a and var_c both refer to different objects in the memory.

Python 'is' vs '==' Operator: Head-to-Head Comparison

We hope that this article has helped you understand how to use Python == vs is. Both operators have different usage but are used for the main purpose of comparison. The “is” keyword is called the identity operator that will check if the two objects are the same or not. On the contrary, == in Python works as an equality operator to determine whether they are equal or not. python == vs is

See why millions of people turn to Udemy’s real-world experts to learn Python. Learn at your own pace with hands-on exercises and quizzes The “is” and “is not” keywords are called identity operators that check if the objects are exactly the same or not.

You can use this operator to compare the value of two objects to determine whether they are equal or not. In Python, it is also referred to as the equality operator.

4. What Is the Difference between Equality and Identity Operators?

5. How Do You Write Equal in Python?

We can write “equal” in Python using the (==) operator.

“=” assigns a value to a variable, while “==” verifies the Python equality of two different variables.