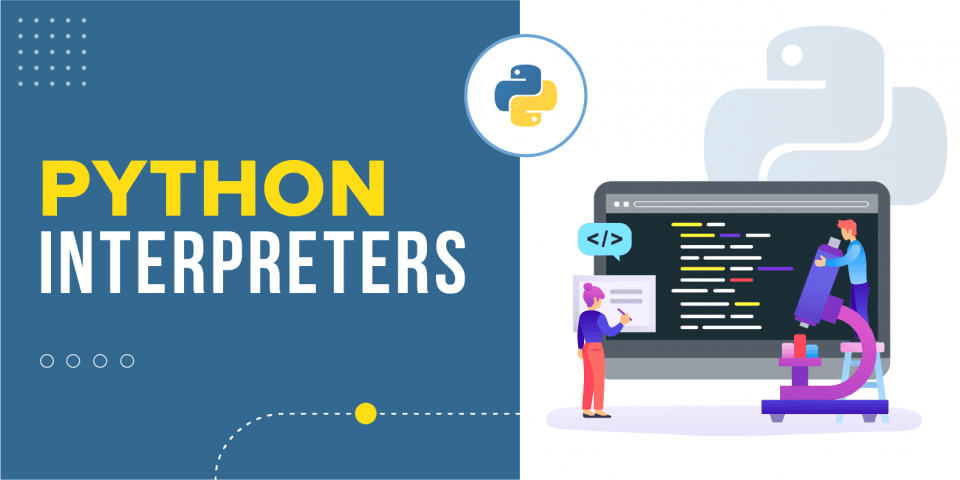 Being the fastest growing programming language in 2022, there is no scarcity of interpreters for Python. But because each of them caters to specific requirements, you need to first figure out which one suits you.

Before we move on to explain 6 of the most popular Python interpreters, let’s first get a brief understanding of an interpreter.

What is an Interpreter?

By definition, an interpreter is a type of computer program that directly executes the instructions written in some programming or scripting language. By direct execution, we mean that it doesn’t require the instructions to be compiled into a machine language program first.

So with that out of the way, let’s move on to the brief summary of 6 of the most popular Python interpreters:

CPython can also be classified as a compiler because it converts the Python code into bytecode before interpreting the same. It uses a GIL, Global Interpreter Lock, which can pose a limitation as it disables the concurrent Python threads for a process.

As the reference implementation of Python, CPython offers the most compatibility with Python packages and C extension modules. As such, all versions of the Python programming language are implemented in C.

CPython is the only option for using Python packages that rely on C extensions to function properly. Targeting CPython is a must if one wishes to reach the widest possible audience for a program developed in the Python programming language. IronPython provides support for dynamic compilation and comes with an interactive console. Using the Python interpreter allows Python scripts to interact with .NET objects. With the Python Tools for Visual Studio, IronPython comes directly integrated into the Visual Studio IDE. Formerly known as JPython, Jython is an implementation of Python that runs on the Java platform. Written in Java and Python, Jython converts Python code into Java bytecode and hence allows Python code to run on any machine having a JVM.

Jython provides support for both static and dynamic compilation. An important feature of the popular Python interpreter is that it allows importing as well as using any Java class like a Python module.

Whether you need to interface with an existing Java codebase or write Python code for the JVM, you can place your bet on Jython.

Featuring a JIT compiler, PyPy supports C, CLI, and JVM back-ends. The foremost goal of PyPy is to offer maximum compatibility with the reference CPython implementation while enhancing the performance at the same time.

PyPy is used by Python developers looking to enhance the performance of some specific Python code. According to the official PyPy website, the popular Python interpreter is about 4.4 times faster than CPython. PythonNet offers near seamless integration of a native Python installation with the .NET CLR. Its approach can be considered to be inverse to that of the one followed by the IronPython.

Together with Mono, PythonNet allows a native Python installation on a non-Windows operating system to operating within the .NET framework. It is possible to operate PythonNet alongside IronPython without any issues. Although Stackless Python uses the C stack, it is cleared between function calls. Hence, the Python interpreter doesn’t depend on the C call for its stack. Like CPython, Stackless Python is written using C and Python.

Perhaps the most important feature of Stackless Python is microthreads. The feature helps in avoiding much of the overhead associated with the typical operating system threads.

Python 2 or Python 3? Which One to Choose?

With the introduction of Python 3 in 2008, it has always been an important question to ask whether to stick with the older Python 2 or get on board with the latest Python 3.

The answer might be easy for those new to learning Python; get started with the newer and better Python 3. However, the pick is not so simple for organizations or professionals relying heavily on Python for their business and having huge Python codebases.

Most of the Python applications as of today uses Python 2.7. However, the transition to Python 3 is increasing over time. This is partly due to the fact that Python 2.7 will receive security updates only until 2020.

For building new Python applications, you must use Python 3. If you’re working on a new open-source Python library then you might want to write it for both Python 2 and Python 3. This is because a significant portion of the Python developers still prioritizes using Python 2.

It is recommended to use the newest Python 3.x interpreter due to the fact that each new version offers improved bug fixes, security, and standard library modules.

You need to stick with Python 2 only if you have a pre-existing codebase in Python 2 or an exclusive library for the same.

If you whole-heartedly love Python 2 and don’t want to move on to Python 3, it’s perfectly alright. However, understand that post-2020 Python 2 won’t be as much of a lucrative option as it is today. So, getting started with Python 3 today, alongside Python 2, might be a good idea.

That completes the list of the 6 most popular Python interpreters, available as of now. You can work with any of them. However, each one of them has its own perks. So, you should better choose wisely, especially when working professionally.

Having a working knowledge of more than one Python interpreter might be a good thing. So the more you try, the better.

Shruti is a professionally accredited content specialist and works closely with brands to identify their disconnect in content marketing, then further strategizing the same. She started pursuing her independent journey as a consultant after leaving her decent 9 to 5 job with Google News as an editor, and have worked withSony, Ministry of Skills and Entrepreneurship Ma Foi Group, TOI, Indochine International, Kakaku, Inc in the past. View all posts by the Author