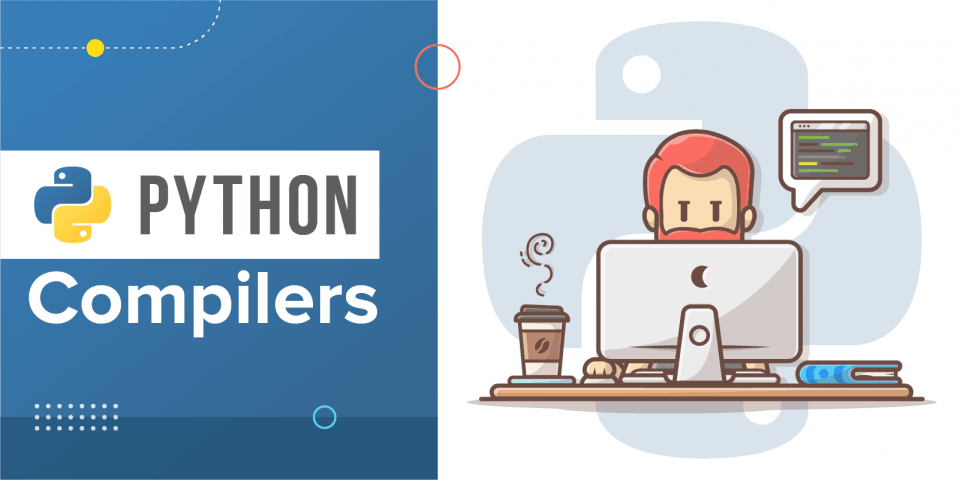 A computer program that translates code written in one programming language into another is called a compiler. Python leads the faction of the fastest growing programming languages. As such, there is no scarcity to Python compilers that can cater to varying project needs.

Although CPython compiler (-cum-interpreter) is the de-facto Python compiler as it belongs to the reference implementation of Python i.e. CPython, there are several other Python compilers that developers like to use. The 7 best are enumerated as follows: Labeled as a ‘Python 3 implementation for client-side web programming,’ Brython is a popular Python compiler that converts Python code into JavaScript code. Adapted to the HTML5 environment, Brython comes with an interface to the DOM objects and events.

Brython is a contraction for Browser Python. It boasts a wide functionality ranging from creating simple document elements and dragging and dropping to 3D navigation. The Python compiler performs much better in Firefox than in Google Chrome.

Not only does Brython provides support for all modern browsers, but also for mobile web browsers. The Python compiler comes with a JavaScript console that can be used for evaluating the execution time of some JS program compared to its equivalent Python in the editor.

According to the official blog of Pierre Quentel, Brython’s creator and lead developer, Brython is much faster than Pypy.js and Skulpt. In certain cases, the Python compiler is even speedier than the Python reference implementation i.e. CPython.

Brython supports most of the syntax of Python 3, such as comprehensions, generators, and imports. It also provides support for several modules belonging to the CPython distribution and comes with libraries to interact with DOM elements and events.

Support for the latest specifications of HTML5/CSS3 is also available in Brython and the Python compiler can use popular CSS frameworks like BootStrap3 and LESS. A source-to-source Python compiler, Nuitka takes Python code and compiles it to C/C++ source code or executables. It is possible to use Nuitka for developing standalone programs even when you are not running Python on your machine.

Nuitka is also available with Anaconda for those preferring it for developing projects involving data science and machine learning. For those looking to write Python code and execute it in web browsers, PyJS is one of the go-to options. The PyJS compiler translates Python code into equivalent JavaScript code so that it can execute inside a web browser.

An important aspect of PyJS is that it comes with an AJAX framework that fills the gaps left between JS and DOM support available for different web browsers. In order to generate equivalent JS code, PyJS leverage Python’s abstract syntax tree.

Despite the differences between Python and JavaScript, most of the data types are identical amongst the two popular programming languages. While using PyJS, some of the Python data types are converted to custom objects, such as lists.

PyJS is a lightweight application. Also, it can be used directly from the web browser and allows executing programs from a web browser JS console.

Runtime support for runtime errors is also offered by the PyJS compiler. As it is possible to embed Python code in the JS code, JS developers can design and develop apps in a pure object-oriented paradigm using PyJS. Another popular Python compiler is Shed Skin. It converts a statically typed Python program into an equivalent, pure C++ program. Statically typed means that the variables in use should only infer to a single data type.

Shed Skin doesn’t provide support for some common features, such as using nested functions and defining functions that accept a varying number of arguments. Only some of the standard Python library functions are available to use with Shed Skin.

If there is an unsupported module by Shed Skin that you need in your code, you have to remove it and add plain code to replicate the functionality desired.

Despite its experimental status, Shed Skin can generate standalone programs or extension modules, which can be imported and used in large Python programs.

The biggest advantage of using Shed Skin is that it allows for a significant performance boost. This is mainly because the Python compiler has reimplemented the built-in Python data types into its own set of classes, implemented in efficient C++ code.

Written in JavaScript and available under the MIT license, Skulpt offers a genuine environment where the compiled code is executed in the JS form.

Because Skulpt is an in-browser implementation of Python, there is no need for additional processing, plugins, or server-side support required for running Python in a web browser. Any Python code written in Skulpt is directly executed in the web browser.

Skulpt is a good option for developers looking to make a web application that allows users to run Python programs inside a web browser while keeping the background servers secure. The popular Python compiler can be easily embedded into an existing blog or webpage too.

For custom integration, Skulpt code can be added to the HTML. You can also teach Skulpt how to import your very own custom modules for having more control. Although Skulpt translates Python code into JS code, it doesn’t facilitate running the latter. Yet another popular Python compiler is Transcrypt. It allows compiling a fairly extensive subset of Python into a compact, readable, and easy to debug JavaScript code. The Python compiler follows a simplistic and powerful syntax without requiring any additional extensions.

Transcrypt pre-compiles to fast, readable JS code that can be debugged from the Python source code using sourcemaps. The lightweight Python compiler provides support for slicing with [i:j:k] matrix and vector operations with +, -, *, and / operators.

A linter, a minifier, and a static type validator come built-in with Transcrypt. Thus, the Python compiler betters team cooperation working on full-scale projects. In addition to offering seamless access to any JS library, Transcrypt also has the ability to run on top of Node.js.

Thanks to support for hierarchical modules, local classes, and multiple inheritance, Transcrypt boasts a flexible and stable overall structure.

WinPython is a Python distribution that is specifically created for the Windows operating system. The earlier versions of CPython weren’t well designed for Windows and as such, they had many bugs. WinPython was incubated as a solution to the problem.

Although the present iterations of CPython are highly stable on the Windows operating system, WinPython has several exclusive features. Because WinPython is a self-contained distribution for Python, you need only download and unpack it to get started.

WinPython also comes prepackaged with some of the most popular Data Science and Machine Learning Python libraries, such as NumPy, Pandas, and SciPy. Hence, allowing you to work with these Python libraries straight away.

WinPython comes with a lot of bundled features, which in most cases, aren’t required, such as the C and C++ compiler. This can be a serious limitation as there is no option to choose and download only those features that are required.

Nonetheless, WinPython is available in a zero package option that comes with only the Python compiler and nothing more.

That completes our list of the best 7 Python compilers. As each one of them is designed with specific requirements in focus, you can use them for catering to a different set of needs. In programming, the more a programmer knows the better it is. So, get started today!

Check out these best Python tutorials to enhance your skills. Do you agree with the list? Which Python compiler should or shouldn’t be on the list. Let us know in the comments!

Software engineer, hardware enthusiast, writer by avocation and a gamer. Swapnil has been working on Hackr for a large part of his career. Primarily working on Laravel, he is also the author of our React Native Android app. When not in front of a screen, you will find him devouring a novel or listening to heavy metal. View all posts by the Author

This article is very helpful.!!
I share the same passion as Swapnil Have.
I am a freelance writer in technical niche.
I would love to hear from you.

I am unable to find contact page here.So, How do you choose writers for you?
Let me know about it?
I want to work for you.
Thank you!!