C++ is still as relevant today as it was during its advent in the mid-80s. The imperative, object-oriented programming language is widely used as a general-purpose programming language. As such, several jobs require candidates to have a profound understanding of C++. If you wish to sharpen your C++ Language skills further, here are some of the best C++ tutorials that can help you out.

If you’re preparing for a job role with emphasis on C++, then here are 20 most important C++ interview questions to self-assess your C++ interview preparation:

Question: Briefly explain the concept of Inheritance in C++.
Answer: C++ allows classes to inherit some of the commonly used state and behavior from other classes. This process is known as inheritance.

Question: Can we have a recursive inline function in C++?
Answer: Even though it is possible to call an inline function from within itself in C++, the compiler may not generate the inline code. This is so because the compiler won’t be able to determine the depth of the recursion at the compile time.

Question: Define an Inline Function in C++? Write its syntax. Is it possible for the C++ compiler to ignore inlining?
Answer: In order to reduce the function call overhead, C++ offers inline functions. As the name suggests, an inline function is one that is expanded in line when it is called.

The syntax of a typical inline function is:

As the inlining is a request, not a command, the compiler can ignore it.

As static member functions can be called even without any object, i.e. with the class name, the ‘this’ pointer is not available for them.

Question: Why do we need the Friend class and function?
Answer: Sometimes, there is a need for allowing a particular class to access private or protected members of a class. The solution is a friend class, which is capable of accessing the protected as well as the private members of the class in which it is declared as a friend.

Similarly to the friend class, a friend function is able to access private and protected class members. A friend function can either be a global function or a method of some class.

Some important points about friend class and friend function:

Question: Explain the significance of vTable and vptr in C++ and how the compiler deals with them
Answer: vTable is a table containing function pointers. Every class has a vTable. vptr is a pointer to vTable. Each object has a vptr. In order to maintain and use vptr and vTable, the C++ compiler adds additional code at two places:

Question: Draw a comparison between C++ and Java
Answer:

Question: Take a look at the following C++ program:
Answer:

Question: What will be the output?
Answer: The program will ask the user to enter 5 numbers and will then present with their sum as the output. For instance,

Question: What are the most important differences between C and C++?
Answer:

An example demonstrating the use of virtual functions (or runtime polymorphism at play) is:

Question: What differences separate structure from a class in C++?
Answer: There are two important distinctions between a class and a structure in C++. These are:

The general function prototype for the Copy Constructor is:

After execution, what will be the value of i and j? Explain your answer.
Answer: Post the execution of the code above, i and j will be 6 and 5, respectively. For understanding the output, it’s important to understand how the unary ‘++’ operator and the decrement ‘--’ operator works in C++.

Therefore, in the code above j is set to the unmodified value of 5 and then i is incremented to store 6.

Question: Take a look at the following two code examples for printing a vector:

Is there any advantage of using one over the other?
Answer: Though both codes will generate the same output, sample code 2 is a more performant option. This is due to the fact that the post-increment ‘itr++’ operator is more expensive than the pre-increment ‘++itr’ operator.

The post-increment operator generates a copy of the element before proceeding with incrementing the element and returning the copy. Moreover, most compilers will automatically optimize the sample code 1 by converting it implicitly into the sample code 2.

Question: Suppose you have the GPA (Grade Point Average) of n number of students and you need to store and display it using C++. Can you write a program that accomplishes this?

Question: What is the ‘diamond problem’ that occurs with multiple inheritance in C++? Explain using an example.
Answer: The diamond problem in C++ represents the inability of the programming language to support hybrid inheritance using multiple and hierarchical inheritance.

Suppose we have a university with some faculty members and some graduate students. A simple inheritance scheme in this scenario might have different types of people in different roles. However, all of them inherit from the same Person class.

The Person class defines an abstract getRole() method that would then be overridden by its subclasses in order to return the correct role type. Things up till this point is simple, however, if we wish to model the role of a TA or Teaching Assistant then things get weird.

A Teaching Assistant is both a student and a faculty member. This will yield the diamond problem, as illustrated in the figure below:

However, such an answer would also be far from complete as it will hide the fact that a Teaching Assistant is someone who is both a faculty member as well as a graduate student.

Tutorials are an excellent means of learning. Moreover, you might get access to additional resources. Don’t miss out on them. Here are some important C++ tutorials to strengthen your C++ knowledge.

There is much more required than having adequate knowledge of all the concepts that are likely to be asked during a job interview. The demeanor and mannerism is something that is also paid attention to by the interviewer. So, be clear and precise, don’t wander off the topic.

Also, you need not beat around the bush. If you don’t know the answer, it’s ok. Simply accept it, rather than ranting meaninglessly. Remember, it’s not only what you say, but also how you say it!

All the very best! 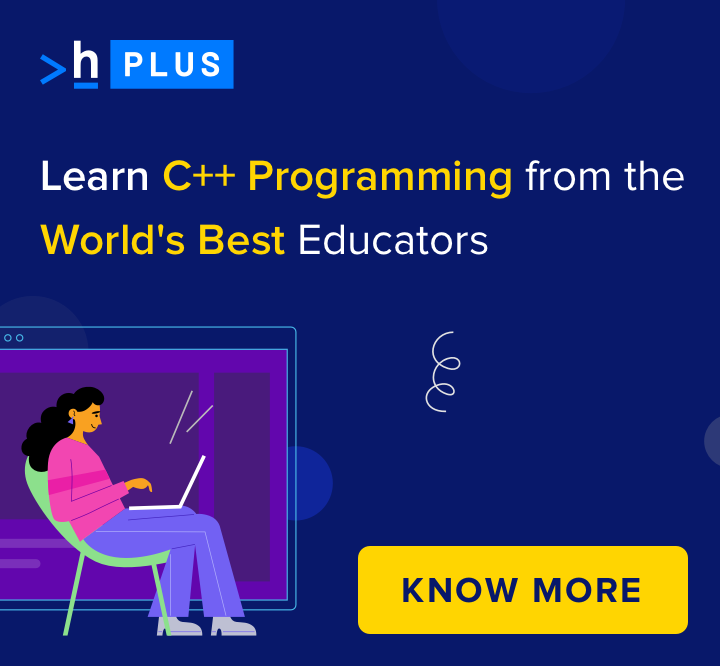