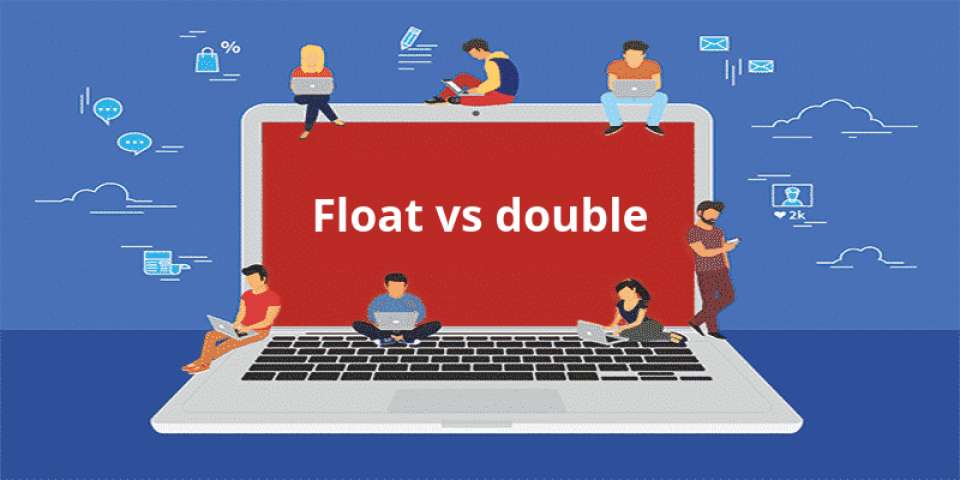 Float and double are primitive data types used by programming languages to store floating-point real (decimal) numbers like 10.923455, 433.45554598 and so on. This article will give you the detailed difference between float and double data type.

Float vs Double: Difference You should know

In the computing world, numeric data can be represented in 2 ways – fixed-point and floating-point arithmetic. Fixed point data is what we call as the integer with some sort of scaling factor. For example, 3.14 will be 314 with a scaling factor of 100, or 2.3456 can be rounded to 2.345 to achieve a fixed number of digits. This method compromises on the accuracy of the result and is not suitable in all situations.

It is thus easier and more accurate to use floating-point representation for high-precision calculations (as we will see in the next section).

Why use floating point data?

In mixed-precision, single-precision values can be used for complex calculations. You can consider it as a trade-off between accuracy and memory efficiency. By combining float16 (half precision) and float32 (single-precision), applications can increase application performance and data transfer speed. Half precision was defined by Microsoft and Nvidia to save space and complexity of floating-point calculations.

We use floating-point and integer math for precise calculations where the result is only limited by the amount of memory available on the system. This type of calculation is called as arbitrary or infinite precision calculation. One of the most important applications of arbitrary precision is public-key cryptography where computations with numbers having hundreds of digits (exponential) are a common sight.

Another similar precision type is the symbolic computation where we use exact values of symbols (like PI) for complex computations. Double is more precise than float and can store 64 bits, double of the number of bits float can store.

Double is more precise and for storing large numbers, we prefer double over float. For example, to store the annual salary of the CEO of a company, double will be a more accurate choice. All trigonometric functions like sin, cos, tan, mathematical functions like sqrt return double values. However, double comes with a cost. Unless we do need precision up to 15 or 16 decimal points, we can stick to float in most applications, as double is more expensive. It takes about 8 bytes to store a variable. We append ‘f’ or ‘F’ to the number to indicate that it is float type failing which it is taken as double.

Float and double function in the same way in all programming languages. For example, in Java, both will throw NumberFormatException with operations where actual numbers are not involved. Note that the compiler will not detect this exception.

This won’t result in an error but is an invalid operation (NaN). Learn more about NaN here.

Where will we use precision values?

If you work with small quantities of data – like average marks, area of triangle etc… use double by default. But, if you deal with a lot of numbers where high precision is involved and any rounding off can change results – like trigonometry, width of a human hair, neural networks, spin of an electron, coordinates of a location and so on – it is important to know about the differences between float and double. While Java encourages you to use double, in languages like C you have the flexibility of using whichever you want.

Now, if you do not do that typecasting, your code will not compile in Java. When you do it, while printing the number, you will only get 6 digits after the decimal point.

This could be anything like atomic mass or gravitational force which has to have all its significant digits intact!

While num1 returns the value as 333.602081, num2 declared as double returns 333.6020814126, which is precise upto 10 digits as mentioned in our printf statement. We can also print a float as a double and vice versa, it all depends on how we write the printf statement. Writing %f will strip off some significant digits, while when we specify number of digits, the entire value up till that will be printed. To print the value in exponential terms, you should use “%e”.

In Java, as we have seen earlier, only if we typecast to (float), the value is printed. Java takes all high precision decimal values as double by default.

We use the operators <, <=, >= and > to compare float and double values. With integers, we can use != and = but here we don’t because the latter operators are less precise.

Obviously, when float is used, exact comparison is not possible as precision is only till 5-6 digits. Any differences in the numbers is not caught.

What do you think the output will be?

To avoid the typecasting every time we write the number in float, we can suffix the number with ‘f’. For example,

.NET and Java also have Decimal/BigDecimal class that has higher precision than double. For more accurate calculations like in financial and banking applications, Decimal is used because it further reduces rounding errors.

Some programming languages like C use long double that gives more precision than double. Check out the different data types of C.

Division with float and double

Same as in multiplication or addition, the division will give more precision digits in double. Consider this simple example –

Pay attention to the last 3 results. The pie that we choose to divide the numbers makes a difference in the significant digits of the result. This is exactly the precision we are talking about!

In Java, it is possible to concatenate strings with double and float using + operator.

Now that we know what float and double are, it will be good to create a table of differences for quick reference and recap.

This is the complete difference between Double vs Float; While typecasting from float to double and double to float is perfectly allowed and valid, it should be done carefully in the code. If you are converting too often, precision might be lost and you will lose the entire purpose of using double.

During initial stages of development, decide and define whether you want to use float or double and maintain the same throughout the application. It is also a good idea to know how particular data is stored in the database. If your application needs to be performant, use float, because with large data sets, double could make your program slow. If your data needs more precision, use double.

Let us change the worries of the past into the thinking and planning beforehand!