Programming Paradigms: A must know for all Programmers 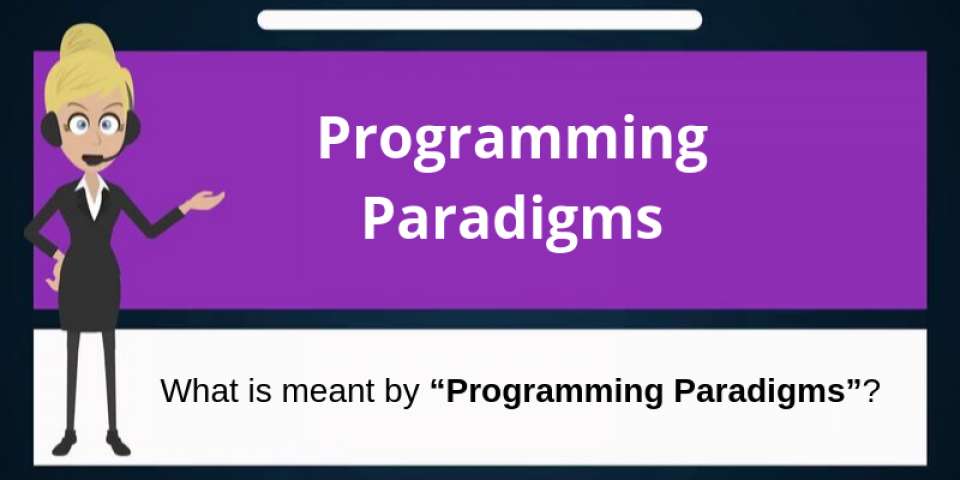 Paradigm is a school of thought or model that has distinct features, frameworks, patterns, and style which help you solve a particular problem. Paradigms are used in all fields such as psychology, sociology, etymology, computer science and so on. In the field of computer science, new programming languages emerge from existing languages and add, remove and combine features in a new way. The languages may follow a particular paradigm or can be a combination of many paradigms. Did you know that there are 256 programming languages? It is evident that each of them has evolved from the other with an amalgamation of various programming paradigms.

Programming languages are tools and not all tools are good for all jobs. Some tasks are easier to solve functionally. Some are clearly suited for Objected Oriented programming. Others get simpler when you use constraint solving or pattern matching.

Examples of Fortran C and Cobol. Here is a sample code in COBOL.

Logical programming is a computer programming paradigm that has its foundations in mathematical logic in which program statements express facts and rules about problems within a system. Rules are written as logical clauses with a head and a body. They also follow a declarative rather than an imperative approach. However, what does that mean?

To understand how a problem can be solved in logical programming, you need to know about the building blocks − Facts and Rules −

Let us understand the difference between Imperative and declarative programming.

Imagine you walk into your favorite coffee place and you would like to order some coffee.

The imperative approach will be:

So rather than providing a step by step instruction (imperative), you tell the system what you need and let it try to come up with a solution (declarative).

Prolog follows the Logical paradigm and is probably the most famous language in the logical programming family.

Prolog has been enormously influential in the domains of theorem proving, expert systems, natural language processing and in the field of artificial intelligence (notably IBM’s Watson2) in general

Prolog, like SQL, has two main aspects, one to express the data and another to query it. The basic constructs of logical programming, terms, and statements, are inherited from logic. There are three basic statements:

Functional programming is a programming paradigm where you have a style of building the structure and elements of computer programs. Here you treat computation as an evaluation of mathematical functions and you avoid changing-state and mutable data.

Functional programming consists only of PURE functions. So, what do you understand by Pure functions?

Pure functions are those which take an argument list as an input and whose output is a return value. Now you may feel that all functions are pure as any function takes in values and returns a value.

For example, if a function relies on the global variable or class member’s data, then it is not pure. And in such cases, the return value of that function is not entirely dependent on the list of arguments received as input and can also have side effects. So, what do you understand by the term side effect? A side effect is a change in the state of an application that is observable outside the called function other than its return value. For example: Modifying any external variable or object property such as a global variable, or a variable in the parent function scope chain.

Here’s a function in the language Scala that takes values and returns their sum.

You will note that recursive functions are common in computer science because they allow you to write efficient programs using a minimal amount of code. The downside is that they can cause infinite loops and other unexpected results if not written properly. For example, in the example above, the function is terminated if the number is 0 or less or greater than 9. If proper cases are not included in the function to stop the execution, the recursion will repeat forever, causing the program to crash, or worse yet, hang the entire computer system.

In this example, the mult method is referentially transparent because any call to it may be replaced with the corresponding return value. This may be observed by replacing mult(3, 4) with 12:

In the same way, add(2, 12) may be replaced with the corresponding return value, 14:

Lisp is the second-oldest high-level programming language after Fortran but still in use. Lisp is a functional programming language; that is, functions are first-class objects in Lisp. However, it is not a pure-functional language such as Haskell, because operations in Lisp can have side-effects. Lisp continues to be popular in the field of artificial intelligence down to the present day.

In this framework, all real-world entities are represented by Classes. Objects are instances of classes so each object encapsulates a state and behavior. State implies the fields, attributes of the object and behavior is what you do with the state of the object and they are the methods. Objects interact with each other by passing messages.

Example of a class:

referring imperative vs declarative to the coffee example is awesome