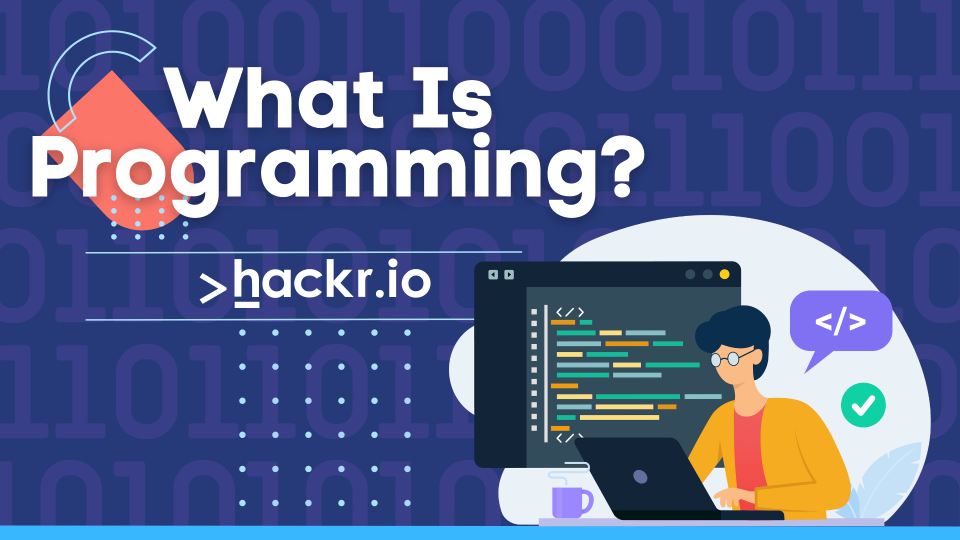 Have you heard the term computer programming and found yourself asking questions like ‘what does programming mean’ and ‘what is programming used for’?

In this article, we’ll provide the ultimate guide to explain programming, helping you to answer the question, what is programming?

We’ll also cover the difference between computer programming and coding, explain what a programming language is, the benefits of programming, and some helpful tips to help you get started if you’re a beginner.

Let’s start with a simple programming definition. Programming involves instructing computers to perform tasks. It could be a simple task like displaying the sum of two numbers or solving complex problems like the operation of self-driving cars.

Having defined programming, let’s consider where it fits in the modern world. Well, it’s safe to say that programming intertwines with our everyday lives in more ways than we probably even know.

The use of programming to make life more convenient can be seen in almost all walks of life, from business, entertainment, transportation, health care, agriculture, sports, politics, and so on.

19th-century English mathematician Ada Lovelace has been credited as the first computer program creator with an algorithm to calculate Bernoulli numbers.

Together with Charles Babbage, they developed what’s regarded as the first computer. It was a primitive mechanical device called the Analytical Engine, and Lovelace wrote her algorithm for this device.

Since then, programming has evolved to become a far-reaching field within the tech industry and beyond.

What Are Programming Languages?

You may be wondering how programmers (humans) pass instructions to computers. This is done with programming languages.

Human languages like English and Spanish have a syntax to guide the composition of phrases and sentences. Programming languages also have a syntax that guides how programmers compose the logic behind the code written.

When we refer to programming languages, we can usually classify them into four distinct categories.

Ever heard the phrase, ‘computers understand only 1s and 0s’? This is machine language (or machine code). It’s a set of binary digits (1s and 0s) used by a computer’s CPU to execute directly.

A computer has transistors, tiny electric switches with two options, on (for 1s) or off (for 0s). The computer’s CPU can read combinations of these on/off electric signals and create the desired output. In general, machine code is referred to as a low-level language.

And just for fun, here’s an example of machine code for the word ‘Hello’.

These were introduced because machine code can be tedious and prone to error. So, instead of using binary digits, code is written with commands that include symbols and characters.

As a computer can only execute 0s and 1s (machine code), programmers must use an assembler to translate assembly language into machine code before execution.

Still, this isn’t human-friendly, and it requires in-depth knowledge of computer memory and CPU processes to make sense of it. Like machine code, assembly language can also be referred to as a low-level language.

When you move away from low-level languages, you tend to encounter the higher-level languages that most people think of when they hear the term programming language.

And while it’s okay to bundle these all together, it can help to divide these modern languages into two sub-categories, starting with mid-level languages.

These allow you to write in more human-friendly syntax while retaining access to a computer system's abstraction layer. You can still control the underlying hardware directly, making mid-level languages a bridge between lower and higher-level languages.

Mid-level languages use compilers to translate their syntax into machine code, allowing the computers to execute the code.

Some common examples of mid-level languages include C, Pascal, and Cobol. And to keep up our habit of looking at actual code, we’ve added a small block of C code to output the word ‘Hello’ to the screen.

Much like mid-level languages, when you hear the term programming language, these are often what’s being referred to. Most computer programmers use them for their day-to-day activities and work.

These languages have a human-friendly syntax and include general purpose programming languages like Python, JavaScript, and PHP. You can also count domain-specific languages like SQL and HTML as high-level.

We’ve included a JavaScript code snippet that outputs the word ‘Hello’ to the console screen.

Trying to choose a programming language? Check out our article on the Best Programming Languages to Learn

What’s the Difference Between Coding & Programming?

You’ll often hear the terms ‘coding’ and ‘programming’ being used interchangeably, but some differences are worth noting. 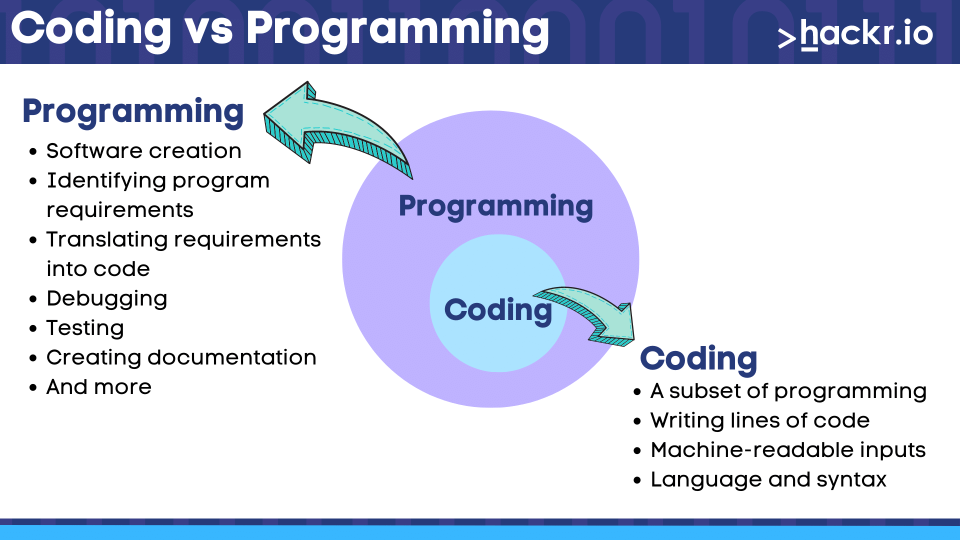 The relationship between coding and programming can be best described by considering what’s involved in writing a novel.

Coding is akin to writing the sentences and paragraphs that form the novel, while programming involves creating broader elements, like plot, setting, character development, narrative, etc.

What Are the Benefits of Programming?

You may be thinking, okay, this is cool, but why should I bother? Technology is everywhere, and the benefit of computer programming cannot be overemphasized.

For example, you are reading this article because your device is programmed to display it to you when you implement the correct clicks. Let’s see some reasons why you should care about programming.

Ready to build cool stuff? Check out the Best Programming Languages for Games

How to Learn Programming

If you’re interested in learning programming, here’s some advice and steps you can take to ensure a smooth learning journey.

If you’ve read this far, you have learned the answer to the question, what is programming?

We also delved into the many benefits of programming, including some tips and advice for you to follow if you’re ready to learn to program.

Undoubtedly, computer programming is a huge topic, and there is a lot to learn and discover! Hopefully, this article has piqued your interest while helping you learn what is programming in simple words.

And, of course, we hope you’re now feeling ready and excited to explore more.

Excited to start programming? Check out our article on

How to Learn Programming

1. What Is the Main Purpose of Programming?

It is to maximize the power of computers. Programming allows us to solve problems with computers quickly, cheaply, and efficiently.

2. What Software Is Used for Programming?

Programming requires us to use various software pieces, some of the most essential being an IDE (Integrated Development Environment) or code editors like Visual Studio Code or Atom and a version control system like Git.

3. What Is the Difference Between Coding and Programming?

Coding is when we use the syntax of a programming language to write computer programs. Programming entails additional processes like identifying program requirements, debugging, testing, etc.

I am from Cameroon and I am just getting started with programming and I really wish to know it on my own. I don't understand the coding , how do I master the various coding steps used to write the program

Hi, this is Anna. I am sending you my intimate photos as I promised. https://tinyurl.com/yfk7kkes

What are the basics please, i want to learn programming

So, my question is:
How can I build my first window software?

Am a high school student,,,,can I learn programming,,, what of salary

I want to learn programming, but how long will it take me to learn and how much do they earn month or yearly.

Nowadays learning programming is essential for everyone. The article is awsome but in perspective, this particular article is some resource that is important and doesn't explain in-depth. I also found an article on unickprogrammer.com/what-is-programming/ which explains in-depth and covers all the basic topics related to programming.

I want to be a programmer, how long it takes to study and start a job?

i want to learn how to computer programming