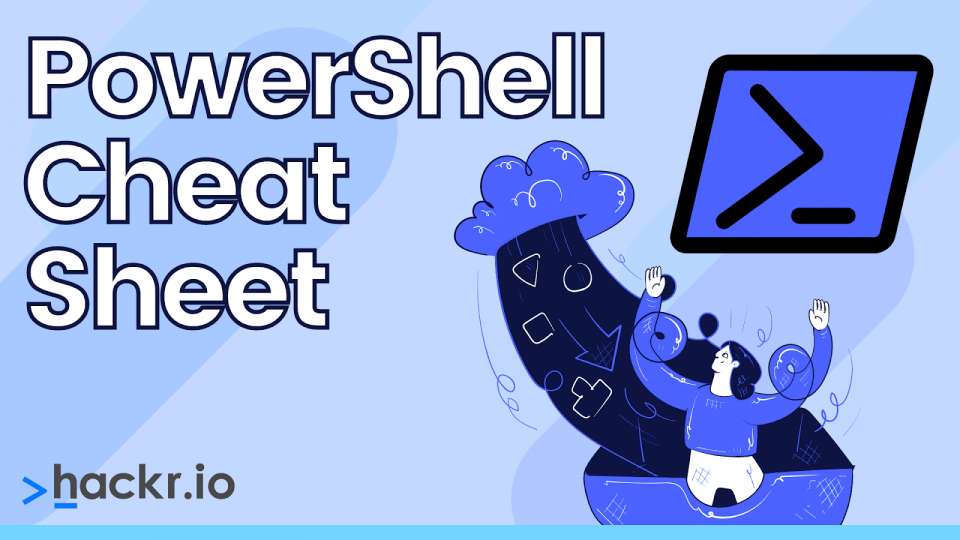 PowerShell is a useful Windows command-line language version that helps you seamlessly perform and automate critical tasks on your systems. But how can you perform these tasks and make the most of PowerShell on your Windows system?

Don’t worry — we’ve compiled a PowerShell cheat sheet documenting PowerShell syntax and all the PowerShell commands to help you optimize PowerShell and even prepare for job interviews.

Let’s start with a quick introduction to Windows 10 PowerShell commands.

PowerShell is a cross-platform and a commonly used task automation solution combining the power of the command-line shell, a scripting language, and a configuration management framework. You can run PowerShell on Windows, Linux, and macOS operating systems. Unlike other available shells that only accept and return data, PowerShell accepts and returns .NET objects.

This shell comes with the following features.

Considering the features of any scripting language, you can use PowerShell to automate the system management process and task. It lets you build, test, and deploy solutions in CI/CD environments.

PowerShell is built on the .NET Common Language Runtime (CLR), which means all the inputs and outputs are .NET objects. You do not have to parse text output to retrieve information from it.

The PowerShell scripting language comes with the following features.

Now, let’s get into some useful PowerShell commands.

Cmdlets are PowerShell’s internal commands. These cmdlets will return one or more objects to the pipeline where at the end of that pipeline, we mention some properties of the objects in the following table to see their values displayed on the screen.

PSdrives are the collection of entities grouped together so they can be accessed as a filesystem drive. The “PSprovider” does this grouping.

By default, a PS session can access several PSdrives including c:, env:, alias:, and HKLM:, where c: refers to the usual Windows c-drive; env: is the space of Windows environmental variables; alias: is the collection of cmdlet aliases; and HKLM is a hive in the registry.

Any PS session will enter the user’s home folder. If you want to switch from a PS session to another PSdrive and retrieve the information from that drive, consider the following commands:

The following table highlights some of the basic pipeline commands:

Cmdlets come with several aliases. The following table highlights a few of aliases, along with their descriptions:

A regular expression can be a literal character or a string.

These allow you to match any number of characters one time, while [^character group] only matches characters NOT in the group.

A pattern can also be a range of characters. The characters can be alphabetic [A-Z], numeric [0-9], or even ASCII-based [ -~] (all printable characters).

The period (.) is a wildcard character in regular expressions. It will match any character except a newline (\n).

The backslash (\) is used to escape characters so the regular expression engine doesn’t parse them.

The regular expressions with the -replace operator allows you to dynamically replace text using captured text.

ForEach-Object is a cmdlet that allows you to iterate through items in a pipeline, such as with PowerShell one-liners. ForEach-Object will stream the objects through the pipeline.

Although the Module parameter of Get-Command accepts multiple values that are strings, it will only accept them via pipeline input using the property name, or parameter input.

If you want to pipe two strings by value to Get-Command for use with the Module parameter, use the ForEach-Objectcmdlet:

A “for” loop iterates while a specified condition is true.

There are two different “do” loops in PowerShell. Do Until runs while the specified condition is false.

PowerShell allows you to store all types of values. For example, it can store command results and command expression elements like names, paths, and settings. Here are some of PowerShell’s different variables.

To create a new variable, you need to use an assignment statement and assign a value to the variable. There is no need to declare the variable before using it. The default value of all variables is $null.

Use a Pascal case name with an approved verb and a singular noun to name a function. You can get a list of approved verbs by running Get-Verb:

Use a function keyword followed by the function name to create a simple function. Then, use an open and closing curly brace. The function will execute code contained within those curly braces.

A module is a package containing PowerShell members, such as cmdlets, providers, functions, workflows, variables, and aliases. You can implement package members in a PowerShell script, a compiled DLL, or both. PowerShell automatically imports the modules the first time you run any command in an installed module. You can use the commands in a module without setting up or profile configuration.

To use any module, you need to first install them. Then, find the command that comes with the module and use them.

If you get a module as a folder, install it before you use it on the PowerShell command line. Some modules are preinstalled. You can use the following command to create a Modules directory for the current user:

Copy the entire module folder into the Modules directory. You can use any method to copy the folder, including Windows Explorer, Cmd.exe, and PowerShell.

Run the following to find the modules installed in a default module location (not imported).

Run the following command to find a module’s commands:

Run the following command with the proper module name:

You can run the following command with the proper module name:

Use the following command to view default module locations:

You can use the following command format:

Use the following to execute the same command as above, only with Linux or macOS:

A hash table is a complex data structure to store data in the form of key-value pairs. We also refer to a hash table as a dictionary or associative array. To understand a hash table, consider a series of IP addresses and the respective computer names. A hash stores this data in the form of key-value pairs, where IP addresses refer to keys and computer names to their corresponding values.

The hash table syntax is as follows:

An ordered dictionary’s syntax is as follows:

If you want to create a hash table, follow these steps:

To add keys and values to a hash table, use the following command format:

For example, you can add a "Time" key with a value of "Now" to the hash table with the following statement format:

Or, you can remove the key with this statement format:

These cmdlets allow you to register and unregister event subscriptions and list the existing subscriptions. You can also list pending events and handle or remove them as desired.

Bottom line? A PowerShell cheat sheet is your one-stop-shop for everything related to PowerShell syntax and commands. In this Windows PowerShell commands cheat sheet, we’ve discussed all the basics to help even beginners navigate PowerShell.

Like any other programming language, you can use variables, and operators, create aliases and functions and even maintain flow control.

If you’re preparing for your upcoming interviews, keep this PowerShell 5.0 cheat sheet handy for quick reference with easy examples.

Interested in expanding your knowledge with Windows Command Line?

1. How Do I Get a List of PowerShell Commands?

You can use the get-command.

2. How Many PowerShell Commands Are There?

There are over 200 commands in PowerShell.

3. How Do I Learn PowerShell for Beginners?

You might consider using Microsoft’s introductory guide to PowerShell. It includes easy language and simple examples to enhance your understanding.

4. Is Windows PowerShell the Same as Command Prompt?

The following table highlights the major differences between PowerShell and command prompt:

5. How Can I Make Command Prompt Default Instead of PowerShell?

Open Settings > Personalization > Taskbar. Now, turn the “Replace Command Prompt with Windows PowerShell'' in the menu when I right-click the Start button, or press Windows key+X” option to “Off”.