C# vs. Java: Which Language is Better to Learn? 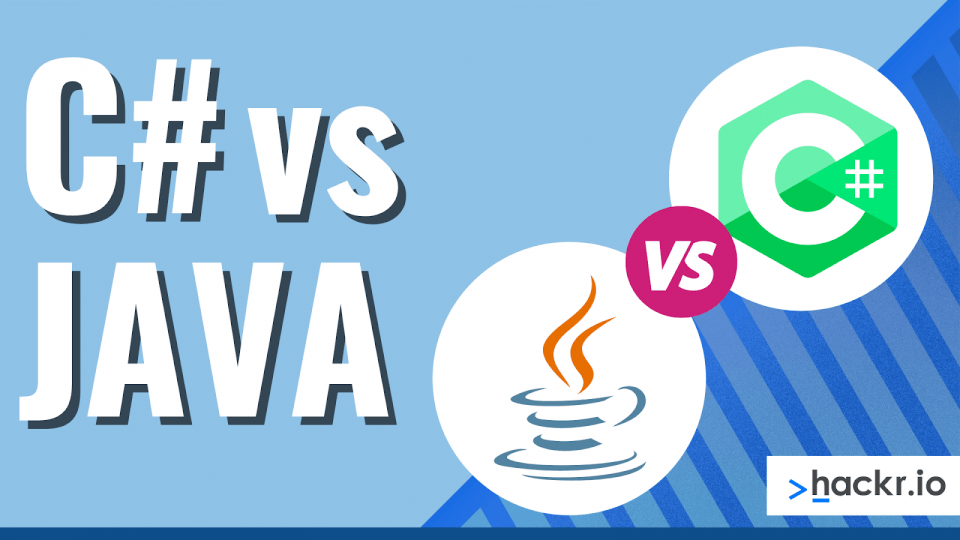 Maybe you’re just getting started with software development and learning to code (and wondering which language to begin with), or weighing two languages against each other to further your career. Somewhere down the line, you might wonder which you should study: C# or Java. Wherever you are in your programming journey, we’ll help you see the differences between C# vs. Java with this guide.

C# and Java are both general-purpose, imperative languages (a programming paradigm that uses a statement that changes a program’s state). Let’s study the two languages and weigh the C# and Java differences.

At a high level, what is the difference between Java and C sharp?

C# had the following design goals:

But is C# similar to Java? Let’s touch upon a few more features before we compare the two. Java is a class-based, object-oriented multi-paradigm language developed by Sun Microsystems and designed by James Gosling in 1995.

It was designed with the WORA concept (Write Once Run Anywhere) and thus is a platform-independent language. Java applications are compiled to bytecode that can run on any JVM regardless of its underlying OS and architecture. Applications can be released for web development, Android-based software, and other devices.

High-level Java applications include embedded systems, desktop applications, and server applications. Devices such as smartphones, ATMs, home security systems, and more are all supported by Java. It remains one of the most popular languages to learn for developers, with many Java courses available online. C# vs. Java: Similarities Between C # and Java

Most Used Languages in 2021 (Popularity) - Statista

Key Differences Between C# and Java

Head to Head Comparison between Java vs. C#

The chart below compares the two languages on a high-level to help you understand the main difference between C# and Java.

Advantages and Disadvantages of Java vs. C#

The C# vs. Java Cheatsheet

Most of Java and C#’s operations are identical. However, there are a few differences in syntax we will outline below.

That wraps up C# vs. Java, including an overview of the languages, their history as programming languages, and their similarities and differences.

We’ll leave you with a quick recap for C$ vs. Java:

Which language do you prefer? Let us know in the comments below!

Is C# Better Than Java?

The debate between C# and Java is long-standing one, with no clear winner. Both languages have pros and cons, and the suitable choice depends on your specific needs and preferences. For mobile app development and games, C# is generally preferred.

Is C# Very Similar to Java?

Yes, C# is very similar to Java. Both languages are object-oriented, statically typed, and have a similar syntax. However, there are some important differences between the two languages. C# is a Microsoft language, while Java is owned by Oracle. This significant C# and Java difference  causes variations in platform support and tooling.

Why is C# Faster than Java?

C# is generally considered faster than Java, although the difference is insignificant. Both languages are compiled, but C# uses a just-in-time compiler while Java uses an ahead-of-time compiler. This means that C# code is typically executed more quickly.

Is C# Copied from Java?

C# is not copied from Java, but it was highly influenced by C++, which was influenced by C and Java. The two languages are similar, but they have different origins and applications, despite both being general-purpose object-oriented languages.

C# is closer to C than it is to Java. This is because C++ (influenced by both C and Java) is the language C# was originally based on. However, C# has since diverged from C++ and is now more similar to Java than C.

What Does C# Have that Java Doesn’t?

C# has several features that Java does not have, including operator overloading, type inference, and nullable types. C# also has LINQ (Language Integrated Query), which is a powerful tool for manipulating data.

Is it Easy to Switch from C# to Java?

The two languages are similar. If you know one, you can learn easily. That said, there are some important differences between the two languages that you should be aware of before making the switch. A cheat sheet can help!

at the moment c# is cross platform, this article need to be updated to take into consideration, the author must review it.

Can an admin please delete this nonsense article. So much wrong or outdated.

The author's knowledge on both the languages is very poor it seems. Please don't read this article for learning purposes.

The information given are all either wrong or old and outdated. Please update this article with more useful and correct information.

Your info on C# is not true, look up .net Core

"C#, on the other hand, is used for game, mobile, and web application development specifically for Microsoft platforms."

Man, are you in 2010? Take a look at .NET Core and it's features. In your post you are making comparisons between language and platform. You should not mix languages with platforms. C# and Java are languages! Don't compare the Java platform with the C# language! They are not comparable! Make distinction between Java platform and .NET/.NET Core platforms and respectively the languages used to build apps on these platforms! A lot of misleading information in your post!

"Compared to Java, C# resources are very limited. The C# libraries work only within the Microsoft ecosystem. On the other hand, the Java library and resource ecosystem are humongous in addition to being well-documented."

C# (CLR) now runs not only on Windows, but on Linux, MacOS as well. And you can also develop for Android and iOS.
And there is a tons of information about C#.
Check the information before writing such misleading articles.

Java does have support for enumerations:

you say that java doesn't have delegate, but java have method reference for example: