PHP is one of the leading names in the big bad world of programming. Along with Java, PHP makes up for an excellent choice for landing a job. Therefore, if you are looking for your dream role as a PHP developer, you are on the right track.

Once you are done with double-checking all PHP core concepts and working hard to build adequacy for best PHP frameworks, it’s time to assess how good you actually are. To help you, here we have compiled a list of Most frequently asked PHP interview questions that will ensure you hit it right:

Question: Can you provide an example of a PHP Web Application Architecture?
Answer: Question: Define the use of .htaccess and php.ini files in PHP?
Answer: Both of them are used for making changes to the PHP settings.

The attacker can disclose the content of the file attacked using the Path Traversal outside the root directory of a web server or application. It is usually done in order to gain access token, secret passwords, and other sensitive information stored in the files.

Path Traversal is also known as Directory Traversal. It enables the attacker to exploit vulnerabilities present in the web file under attack.

Question: Explain the mail function and its syntax.
Answer: In order to directly send emails from a script or website, the mail() function is used in PHP. It has a total of 5 arguments. The general syntax of a mail function is:

Question: What is Memcache and Memcached in PHP? Is it possible to share a single instance of a Memcache between several PHP projects?
Answer: Memcached is an effective caching daemon designed specifically for decreasing database load in dynamic web applications. Memcache module offers a handy procedural and object-oriented interface to Memcached.

Question: How is typecasting achieved in PHP?
Answer: The name of the output type needs to be specified in parentheses before the variable that is to be cast. Some examples are:

Question: How would you connect to a MySQL database from a PHP script?
Answer: In order to connect to some MySQL database, the mysqli_connect() function is used. It is used in the following way:

While a constructor is used to initialize the private variables of a class, a destructor frees the resourced created or used by the class.

Here is a code example demonstrating the concept of constructors and destructors:

Question: What are some common error types in PHP?
Answer: PHP supports three types of errors:

Question: What are the most important advantages of using PHP 7 over PHP 5?
Answer:

Question: What are the Traits in PHP?
Answer: The mechanism allows for the creation of reusable code in PHP-like languages where there is no support for multiple inheritances. A trait can’t be instantiated on its own.

Question: What is a session in PHP? Write a code example to demonstrate the removal of session data.
Answer: The simplest way to store data for individual users against a unique session ID is by means of a PHP session. It is used for maintaining states on the server as well as sharing data across several pages. This needs to be done because HTTP is a stateless protocol.

Here is the program for demonstrating how session data is removed:

Question: Why is it not possible for JavaScript and PHP to interact directly? Do you know any workarounds?
Answer: No direct interaction is possible between JS and PHP because while the former is a client-side language, the latter is a server-side language. An indirect interaction between the two leading programming languages can happen by means of exchanging variables.

This exchange of variable is possible due to two reasons:

Question: Write code in PHP to calculate the total number of days between two dates?
Answer:

Question: Briefly explain PHP & some of the popular PHP frameworks.

Question: Will you draw a comparison between server-side and client-side programming languages?

Question: Please explain the differences between the echo and print statements in PHP?

Answer: There are two statements for getting output in PHP - echo, and print. Following are the distinctions between the two:

Quesion: How do the static websites differ from dynamic websites?

Answer: There are two types of websites, static and dynamic. Differences between the two are enumerated as follows:

Question: Please explain the use of the imagetypes() function?

Answer: The imagetypes() function gives the image format and types supported by the present version of the GD-PHP.

A: Passing the variable by value means that the value of the variable is directly passed to the called function. It then uses the value stored in the variable. Any changes made to the function doesn’t affect the source variable.

Passing the variable by reference means that the address of the variable where the value is stored is passed to the called function. It uses the value stored in the passed address. Any changes made to the function does affect the source variable.

Question: What do you understand by type casting and type juggling?

Answer: When a variable’s data type is converted explicitly by the user, it is known as type casting. The PHP programming language doesn’t support explicit type definition in variable declaration. Hence, the data type of the variable is determined by the context in which the variable is used.

Question: Could you explain how to fetch data from a MySQL database using PHP?

Answer: To begin with, you need to first establish a connection with the MySQL database that you wish to use. For that, you can use the mysqli_connect() function.

Suppose that the database that you need to access is stored on a server named localhost and has the name instanceDB. Also, it has user_name as the username and pass_word as the password.

For establishing a connection to the instanceDB, you need to use the following PHP code:

Next, you need to use the SELECT statement to fetch data from one or more tables. The general syntax is:

Suppose, we have a single table called instancetable with column_1, column_2, and column_3 in the instanceDB, then to fetch data, we need to add the following PHP code:

Question: How will you display text with PHP Script?

Answer: Either the echo statement or the print statement can be used for displaying text with a PHP script. In usual scenarios, the former is preferred over the latter because it is slightly faster.

Question: What are some of the most popular PHP-based Content Management Systems (CMS)?

Answer: There are a plethora of PHP-based Content Management Systems in use today. Drupal, Joomla, and WordPress are the most popular among the bunch.

Question: Can you explain the difference between mysqli_connect() and mysqli_pconnect() functions?

Answer: Both mysqli_connect() and mysqli_pconnect() are functions used in PHP for connecting to a MySQL database. However, the latter ensures that a persistent connection is established with the database. It means that the connection doesn’t close at the end of a PHP script.

Answer: The $_SESSION[] is called an associative array in PHP. It is used for storing session variables that can be accessed during the entire lifetime of a session.

Question: Explain the difference between substr() and strstr() functions?

Answer: The substr() function returns a part of some string. It helps in splitting a string part-by-part in PHP. This function is typically available in all programming languages with almost the same syntax.

The strstr() function is used for searching a string within another string in PHP. Unlike the substr() function, strstr() is a case-sensitive function.

Q: Explain the use of $_REQUEST variable?

A: $_REQUEST is an associative array that by default contains the contents of the $_COOKIE, $_GET, $_POST superglobal variables.

Question: Please enumerate the major differences between for and foreach loop in PHP?

Answer: Following are the notable differences between for and foreach loop:

Question: Is it possible to submit a form with a dedicated button?

Answer: Yes, it is possible to submit a form with a dedicated button by using the document.form.submit() method. The code will be something like this:

Question: Please explain whether it is possible to extend a final defined class or not?

Question: Will it be possible to extend the execution time of a PHP script? How?

That’s all for now! Here are some important PHP tutorials to go for, just in case. Keep your calm and stay confident during the big day.

Though having a good understanding of the technical concepts is important, your presentation is also one that’s being reviewed. So, all the very best for your PHP interview! How do I connect to localhost?

How do I test PHP locally?

What is the difference between PHP 5.6 and 7?

What are the benefits of using PHP?

It's actually possible. You can pass PHP variables to JS but not backwards.

Thanks for sharing this information. 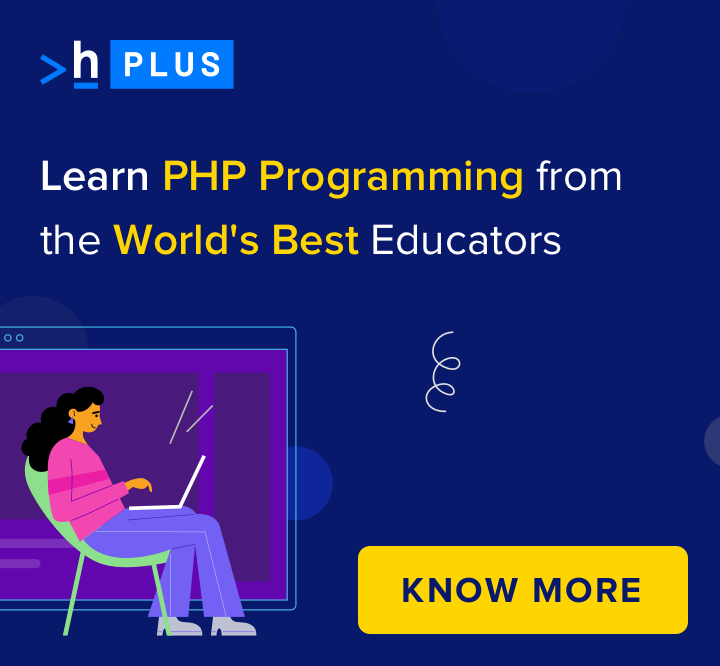