Node.js vs PHP: Which Should You Choose? 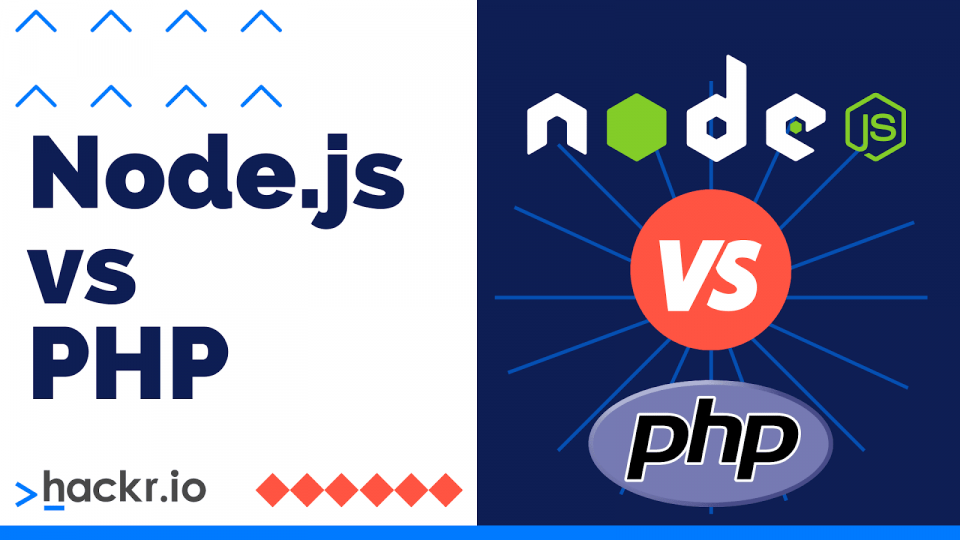 PHP and Node.js are two of the most widely used server-side technologies. There are quite a few differences between the two leading, which is what we hope to explain here. If you’re looking to study either of the two, this article should give you a good sense of what each is like.

The Node.js vs PHP debate might be relevant to you if you’re thinking of taking up a career in back-end development. Before we move on to discussing the differences between the two, let’s first take a brief look at both technologies.

PHP was created by Rasmus Lerdorf and made its debut in 1995, originally standing for Personal Home Page. Now PHP refers to Hypertext Preprocessor: an open-source, server-side scripting language specifically for web development. Though PHP is a server-side scripting language, it can also be used for other purposes. PHP scripts have a .php extension and contain a combination of CSS, HTML, JavaScript, and plain text.

PHP remains one of the top programming languages to get a job.

It is also used by some of the biggest websites and companies on the internet, including Facebook, Flickr, Wikipedia, Yahoo, and Tumblr.

Developed by Ryan Dahl, Node.js was launched in May 2009. With the introduction of Node.js, you could create pure JS applications that operated outside the web browser environment.

Node.js is an open-source, server-side JavaScript runtime environment built on top of the Chrome V8 JavaScript engine. It follows an event-driven architecture with a non-blocking I/O design, making it suitable for developing fast and highly scalable applications. The files use the .js file extension, containing pure JavaScript code. Companies that use Node.js include GoDaddy, IBM, LinkedIn, Netflix, PayPal, and Walmart.

PHP vs Node.js: How are they Different?

We’ll examine the differences between PHP and Node.js by focusing on a few different criteria. This should give you a well-rounded look at the two server-side technologies.

The best application scenarios for PHP use are applications that use LAMP stack in API development, Content Management Systems (Drupal and WordPress both use PHP), and developing CPU-intensive applications, such as meteorology apps and scientific apps.

Node.js is widely employed for creating single-page applications, including individual websites and resume portfolios; developing highly scalable server-side applications (primarily due to the non-blocking I/O and event-driven model of Node.js); and real-time applications, such as chat apps and video streaming applications.

There are two types of programming code:

PHP is mostly synchronous with the exception of some APIs that behave in an asynchronous manner. If a previous line of synchronous code has a function that takes time to execute, then the rest of the code has to wait. As such, this increases the overall execution time.

Node.js code is asynchronous. This means that the JS engine runs through the entire code at once and there is no need for waiting for a function to successfully complete execution. Consequently, Node.js can be very fast compared to PHP.

However, there is a catch with the asynchronous code. A program can get stuck in callback hell if there are a lot of functions that need to be chained. It requires piping data from one function to the other. Nonetheless, Node.js has a workaround for this issue. The async/await feature of Node.js enables a block of code to execute as if it was synchronous code.

More often than not, PHP is used with traditional or relational databases such as MariaDB, MySQL, and PostgreSQL. Though there are ways to use NoSQL databases with PHP, this is uncommon.

SQL database systems, especially MySQL, are prone to SQL injection, cross-site scripting, and other attacks. Though NoSQL injection attacks are a registered vulnerability for NoSQL-based databases, the chances are smaller than for SQL databases.

This is so because the NoSQL database design philosophy resists such attacks. and the fact that they are more recent developments.

Switching between different environments and programming languages leads to inefficiency. Sometimes, it can just be plain frustrating.

While writing back-end code in PHP, the developer must frequently switch between different programming languages. This is due to the fact that PHP is mostly used as a part of the LAMP (Linux, Apache HTTP Server, MySQL, and PHP) stack.

Node.js features a wide variety of frameworks. Derby, Express, and Meteor are some of the most popular frameworks used with Node.js development projects. Additionally, new frameworks for Node.js appear every now and then.

There is a wide variety of PHP frameworks available to ease and expedite web development. These frameworks assist in building agile, robust, and secure web applications.

PHP makes use of module installing technologies, most notably:

Node.js comes prepackaged with the NPM package management system and its registry. It is easier to use and publish than PHP modules.

Unlike Node.js, PHP doesn’t come bundled with modules. A developer needs to download and install them manually.

Request handling determines how well the technology handles client-side requests. Both PHP and Node.js function differently in this regard.

PHP handles a single request at a time, which can be comparatively slow. It also consumes a lot of computing resources. On the plus side, it handles requests accurately.

Node.js handles multiple requests at a time, and consumes less computing resources on the whole. However, if there is an unresolved error in a single request, it can lead to inaccuracies overall.

PHP versions prior to v5.4 required downloading and setting up LAMP and XAMPP servers. However, post that, PHP comes bundled with an inbuilt development server.

Node.js comes prepackaged with core modules, including the file system, HTTP, and DNS. These help in the development of customized web servers.

Express.js, Koa.js, and Sails.js are some of the most popular Node.js frameworks for running web servers. Each of these can be set up using a mere 4 lines of code at maximum.

Node.js or PHP: Which is Better?

That completes our comparison of PHP and Node.js. As you can see, both backend technologies have their distinct advantages and disadvantages over one another. Making the choice between them depends largely on the project requirements.

If you’re looking to study either one, think about what applications you would like to build and the career path you’d like to take. That’ll help you make a decision on which to learn first.

1. Is Node.js Better than PHP?

Not necessarily. Both Node.js and PHP have their pros and cons, which are explained above. You will find uses for both in different applications.

2. Is Node.js Easier than PHP?

Both Node.js and PHP are easy to learn. If you’re deciding between the two, think about what applications you would like to build and make a choice accordingly.

3. Is PHP Slower than Node.js?

Yes, Node.js is generally faster than PHP. However, what is more important is the use of the right technology for the application you are building.

4. When is the Use of Node.js Recommended?

Node.js is best used for real-time applications like games, chat rooms and collaboration tools. It does well when there are a lot of requests coming in. Do not use Node.js for CPU heavy applications.

What is Node.js? Your Ultimate Guide for 2022
Read More

Quotes: "Asynchronous: Entire code is executed at the same time", "there is no need for waiting for a function to successfully complete execution"

This is wrong! (But maybe some day with a kind of quantum computer?)

You can't run every code/functions simultaneously. There some functions, that uses code out of the programming languages scope (I/O for file system, databases, etc) or are just waiting for something. While this functions are doing their job independent from the main code, in mostly every case there are still other functions waiting for those and can only be resumed, until those are finished.

Asynchronous code, to be clear, makes it possible for a single threaded code, to delegate tasks to other programs and is still responsive (not blocked while waiting), while those other tasks are working.
For example Node.js sends a query to a database and while the database is processing that query, Node.js is working on other things. When the database sends its response, a function in Node.js was waiting for it and after the current workings are finished, this function begins to process the response. (And if that processing isn't even an asynchronous thing, no other functions can do anything, until this processing is finished)

thanks for the info..

When people make nodeJS vs PHP comparasion, it really bugs me that they forget about the "real" server totally.
To get node up and running in the production is not easy and is not cheap.
To get php & mysql up and running in production is just to buy 6$/month webserver where everything is ready, MAINTAINED with security updates and all. You can focus on your app, not on maintaining of server and trying to optimize bandwith because node is so slow.

Other thing is, when you do PHP you only need to know PHP
When you do node, you need gazillions of packets, modules, build scripts, etc... and they do break down, so fast

Thanks for sharing Very Use ful Blog..

Even we have to download NPM packages in javascript