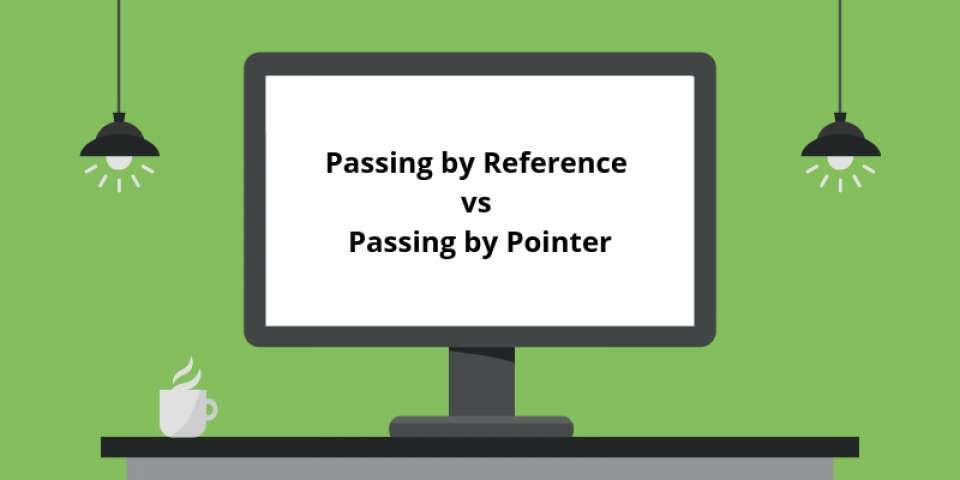 There are three ways to pass variables to a function – pass by value, pass by pointer and pass by reference. The most common language that uses pass by reference in C++. To discuss pass by reference in detail, I would like to explain to you the other two ways as well, so that the concepts are planted in your mind forever. The examples I have written are in C++ because C++ uses all the three and it will be easier for us to compare and understand each of them. If you would like to learn more about C++, do it here.

When you call a function with pass by value, two copies of variables with the same value are created. In effect, whatever changes are made to the variables inside the called function are not reflected to the actual variables with which the function is called (because they are two different copies whose memory addresses are different). For example –

You might think that count will print the value as 10. But that is not the case. The value of a in the main function will remain 5 even after calling the doubleTheValue function.

Why was the value not getting changed in the previous example? Because, there were two values pointing to different addresses in the memory! Passing by reference helps solve this issue by passing the memory location of the variable to the called function. That means, both the passed variable and the parameter used in the called function point to the same location and are always in sync – any change to the parameter reflects in the variable as well. Kudos! Let us change the above example –

&a points to the memory location of a. When the function executes, it picks the value of a from that memory location and changes it. This time, cout gives us ‘10’ as the answer.

With this basic overview, let us now move on to some more details of pass by reference.

How Java and other languages ‘pass by reference’

While most of the newer languages deal with pass by reference with a different name, the underlying concept remains the same. For example, Java passes objects (class types) by reference, but the primitives like int, double etc are passed by value. Consider –

Let us say a function changeDetails(Student stud1) passes the object of Student. This object has a memory location and any changes to the Student object will be reflected in the address. But what about the primitive types?

Their values are also changed even though they are pass by values, because they reside inside the object and are accessed through the same memory location. So, when we do this will create a copy of the variable and the value in the stud1 object will not be changed!

Same way, if you pass individual primitive variables, the original value will not be changed. However, if you pass the whole object, the values are changed. The languages like Python, JavaScript, Ruby and PHP do the same!

This entire discussion brings us to an important point – what is the difference between value types and reference types?

Now that you are able to picturise the difference between pass by value and pass by reference, let us understand one more concept – pass by pointer.

As we are sending the address of a, which is ptr or pointer to the location, value of a is accessed as *ptr. This will give the output as –

The output is the same whether we do pass by pointer or pass by reference. In both cases, we are referring to the memory location where the variable ‘a’ is stored and modify the value directly from the single address. There is no other copy of a created, unlike in pass by value.

So, what is the difference between pass by pointer and pass by reference?

Before doing a tabular comparison, I want to show you another example, where we can easily picturize the differences.

A pointer can store memory address of any variable (and not value), named or unnamed. It can also point to null or empty. For example – where there is no variable assigned to the new int, but a memory location has been created along with a pointer ptr2.

You can also assign a pointer to null!

On the other hand, reference is an alias for a variable. Let us say,

Both num1 and refNum1 point to the same location now.

Because of this, whenever we change the value of num1, refNum1 will change and vice versa. Basically, we are changing the value at the memory location, which has two names – num1 and refNum1.

We see that the reference variable and pointer both hold the address of a variable, however reference value should always be initialized. They cannot hold empty or null values.

int &refNum1; //will give you compilation error

Here is a sample code where we will use pointers and references. Read it step by step –

The code is modified version of the original code from here.

Pass by Pointer vs Pass by Reference: Head to Head Comparison

Hope the examples and comparisons have given you enough clarity on pass by reference and how it is different from pass by value and pass by pointer. Though pass by reference and pass by pointers serve the same purpose, there are subtle differences between both. Remember that pointer is a reference, but the vice-versa may not be true. As we have seen, most objects use reference because it is quicker and does not have to deal with the additional features that pointer gives. When you have to reassign a location, use pointer. Otherwise, always prefer references!