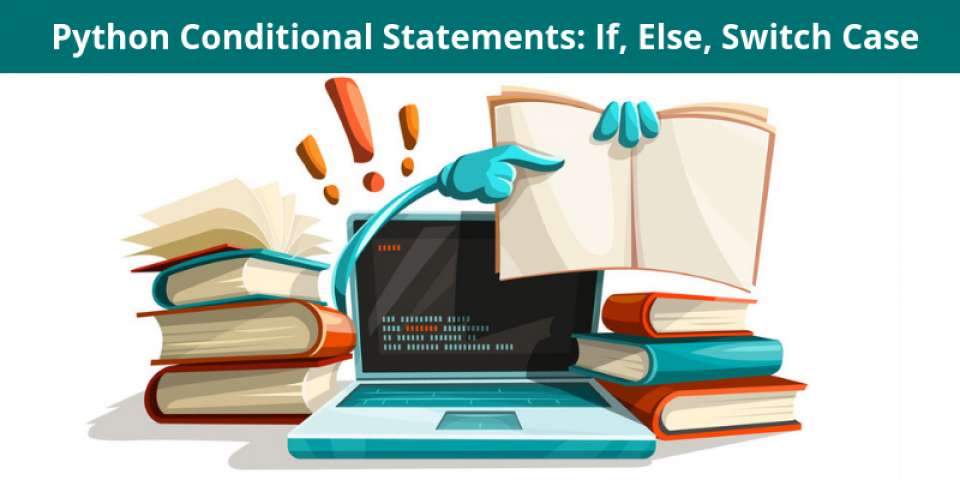 If you are just starting to learn Python, you will soon understand that conditional statements in Python are really useful and perform a variety of actions depending on the conditions or cases and whether they are true or false.

The different types of statements in Python and their explanations are given below:

The Else-If statement is used when the else condition might not suffice. This is used mostly in those cases when you have to justify more than two results.

The nested Else-If statement is used when there are multiple results need to be defined.

A switch case statement is a multi-branched statement which compares the value of a variable to the values specified in the cases. Python does not have a switch statement but it can be implemented using other methods, which will be discussed below.

In general computer programming and associated languages, the switch case statement is a form of selection means to alter the control flow of program execution through the value of a predefined variable or expression, using the process of search and select. The switch statement is to some extent similar to the if statement, which is used in a variety of programming languages, including C, C++, Visual Basic, Python, Pascal and Java. Many variations of the statement are used in other languages, with names such as case, inspect or select.

In the majority of languages, the typical syntax of the switch case statement is as follows:

Implementation of Switch Case in Python

Unlike many other languages, Python does not have a default switch construct. This may feel odd if you are from a Java or C++ background, but in Python, Switch needs to be implemented in a roundabout way, rather than directly. To get around this, one would need to use the pre-built dictionary construct of Python to define the cases and the outcome, if and when a case is met. Below we take an example, where we will define a function month() to tell us a certain month of the year. The dictionary performing the mapping in this is called switcher.

return switcher.get(i,"Invalid month of the year")

Now, we make calls to month() with different values.

As you can observe, the switcher will only print out the values provided to it, and will return a ‘Invalid month of the year’ when another value is input. It happens as it was told to do so using the get() method of a dictionary.

To implement the switch case in Python, we can also use

Switch case can be implemented in Python using Python functions & lambdas, the syntax of which is given below:

When different values are passed through it, we get:

Using the concept of Classes, we can implement Switch case with the following syntax:

When different values are passed through it, we get:

Switch Case vs If Else

Implementation in other languages

The if-else is a selection statement in object-oriented programming. Below is the general form of an if-statement:

Let us understand better with an example:

Since the expression is true, the output will be ‘Yes’

Well this is almost everything you should know about the Python Switch Case statement. This selection statement makes error detection easier as the program is divided into units through the specified cases. Although it can only check for equality, it is really helpful when you wish to keep the code clean when many values for a variable need to be compared.

If you have any questions regarding the Python Switch Case Statement or have a suggestion to make, feel free to do so via the dedicated comments section below.