What Is Smoke Testing? 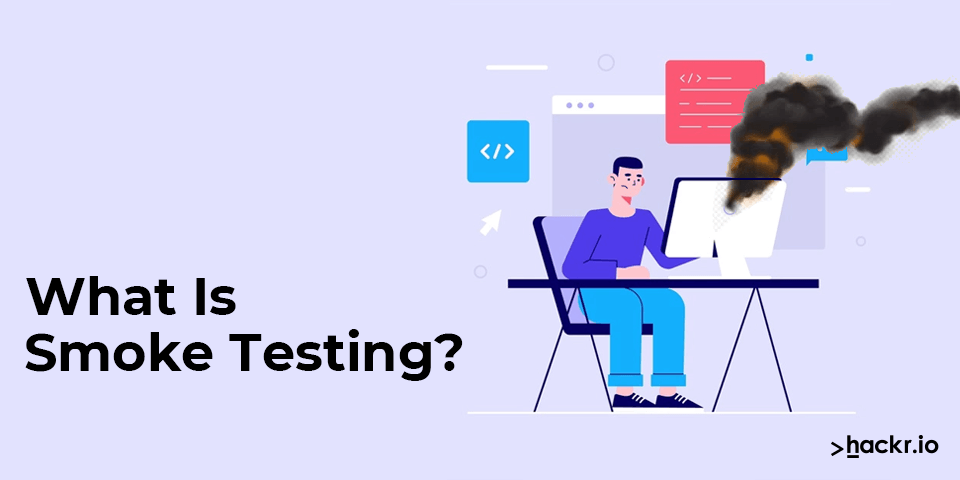 What is Smoke Testing?

You might be wondering, “what is smoke testing?” Don't sweat it — you’re about to learn all you need to know about performing a smoke test, including the smoke testing meaning and smoke testing vs. sanity testing.

Before we dive in, let's take a look at smoke testing for hardware.

Why Do We Call it Smoke Testing?

Before the phrase “smoke test” became synonymous with software, it only applied to hardware testing.

Let's say you want to test a new computer motherboard. You would follow this testing process: plug it in, turn the power on, and wait. If you see smoke coming from the hardware, it fails the test. If there’s no smoke, it passes the test.

QA engineers don’t expect to see actual smoke coming from software. Still, they have to ensure the software is flawless and ensure it's ready to proceed to the next phase of rigorous testing.

What is Smoke Testing?

There are many rounds of testing that software must go through, and smoke testing is one of them. The smoke test goes by different names — some people call it "build acceptance testing" (BAT), while others call it "confidence testing.” No matter the term you use, the goal of smoke testing remains the same: to test the basic functionalities of software.

For example, you might use smoke testing to test the response of a software’s graphical user interfaces (GUIs), or whether the software can install and run proper navigation between different pages.

Additionally, smoke testing allows QA engineers to identify bugs and other defects. The QA team will then confirm if the software is ready for further testing, or whether developers should halt software development. If you are working on a GUI application, a smoke test will focus on one of the following:

Why is Smoke Testing Important?

Smoke testing helps developers and engineers ensure that new software is as flawless as possible. Smoke testing matters for the following reasons:

Smoke testing lets you uncover issues and save your development team time and money. To optimize smoke testing, make sure you know all of its characteristics and process steps.

Here are the characteristics of smoke testing:

When is Smoke Testing Necessary? Smoke testing is necessary for every software. You perform a smoke test under the following circumstances:

Example: When developing an e-commerce application, here are some items that you test:

Who Should Do Smoke Testing?

Ideally, a person who performs a smoke test should know the new software’s features and how to test them. In most organizations, the task of smoke testing falls on the QA team, either a QA lead or engineer.

When a developer releases the build to the QA platform, a QA specialist will take over and conduct a thorough smoke test.

There are three types of smoke testing:

One of the most common smoke test methods, the manual method is ideal for any startup company in building a suite of smoke tests. With a manual method, the tester updates or creates scripts and each unique code in the software.  We recommend that you perform between 20 to 50 tests, as anything less than that won't be enough to spot errors.

Also called regression testing, the automated method of smoke testing compares already recorded tests against a new software to catch and eliminate bugs and errors quickly. This method is usually faster than the manual method. And, a perfect automation session can do more than test the software’s functionalities. It can also provide insight into the user's action when interacting with your software.

Here are some of the advantages of smoke testing:

You can use smoke testing to uncover bugs early in the software life cycle. This on its own will save you time and money.

Another advantage of using smoke testing is that it can troubleshoot new bugs. Thanks to its high coverage, you can spot regressive bugs effortlessly.

If improving competency is one of your goals, then you shouldn't skip smoke testing. You can use it to test every single feature and avoid wasting resources.

Smoke testing allows you to become a cautious gatekeeper. You can accept or reject any new build.

You can use smoke testing to establish whether a new build is ready for the next testing stage.

How can we best maximize the benefits of smoke testing? Use these helpful tips below to ace your smoke testing:

Make sure that you have everything you need before you perform a smoke test. For example, you should ensure you have performing database tables and adequate backup storage. You might also want to gather all your files for testing beforehand and ensure your smoke testing software works perfectly well.

Nip coding issues immediately by conducting your smoke test early. You don’t want to have to fix bugs when you are about to launch your software.

Make a habit of recording each smoke test. This helps you access reliable data when you need it.

Now that you have the answer to the question, “what is a smoke test?” we hope you have the tools to test any software before launch.

Keep in mind that after each smoke test, you need to clean up. Cleaning up differs from one QA specialist to another. Some prefer to clean up before performing a smoke test; others do it after every smoke test. Cleaning in this context means deleting files, emptying database tables, and sometimes even stopping a server.