What is Selenium WebDriver? [Complete Guide] 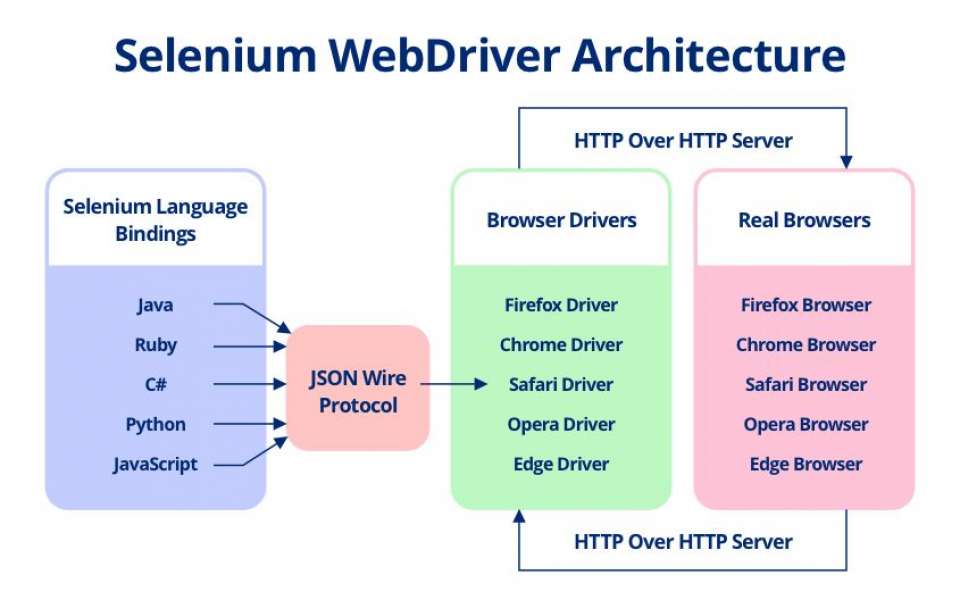 Let’s get to know each one of them in detail and what they help us with:

Developers and Software testers use the language they are comfortable with to write automation scripts. There are various languages available like C#, Java, Python, Perl, etc in which one can write a script, so this can make the task difficult. However, Selenium client library or Selenium language binding facilitates the capability of multi-language support. You can use the language you are comfortable with to write your automation script and Selenium will do the rest. To understand this more, let’s take an example if you want to write automation script in PHP language, you would require PHP client libraries and the rest of the task will be done. You can download all the Selenium binding from Selenium official website.

JSON (JavaScript Object Notation) Wire Protocol facilitates the capability of transferring the data between the Client and Server on the web. It is a REST (Representational State Transfer) API which provides a transport mechanism and defines a RESTful web service using JSON over HTTP.

Browser Drivers are used for interacting with browsers and relaying automation script instructions to the browsers. Browser drivers take care of loss of any internal logic of browser functionalities. Each browser has its specific Browser Webdriver.

The best part about Selenium Webdriver is that it supports all the major browsers like Google Chrome, Mozilla Firefox, Internet Explorer and Safari. Every browser has specific Webdriver for executing automation scripts.

There are various drivers like HtmlUnit driver, Chrome Driver, Firefox driver, Internet Explorer Driver, Opera Driver which are required in order to run automation scripts. Let’s get to learn each one of them in detail:

As the name suggests, this is based upon HtmlUnit and is one of the most lightweight and fast implementations of WebDriver. If you’re using a language binding (other than Java) in that case, you’ll need to have this driver.

Command lines to use in your code for using HtmlUnit Driver:

Commands to use in your code for using Firefox Driver:

Internet Explorer Driver is used to run automation scripts on internet explorer. It supports IE7,8,9,10, and 11. Earlier it used to support IE6 as well however it dropped supported for it in 2014.

Command lines to use in your code for using Internet Explorer Driver:

Chrome Driver works with Chrome Browser to help automate test automation scripts. For the WebDriver to discover ChromeDriver, you need to enter ChromeDriver’s path into the test script.

Command lines to use in your code for using ChromeDriver:

Selenium Webdriver interacts with the website and its web elements in a browser just like a real user with use of browser’s native support to hit direct calls without the need of any intermittent software or device. It supports all modern web browsers like Chrome, Firefox, Opera, Safari and Internet Explorer. You can launch any browser with easy commands. For example Chrome Browser Selenium Webdriver executes test script faster when compared to the other tools of the Selenium suite. Unlike Selenium RC, it directly communicates with the browser without the need of any intermediate server.

Selenium uses some of the following methods to handle dynamic elements:

2. Easy to Identify and Use Web Elements

Selenium WebDriver has a set of locators that can be helpful in finding web elements on the webpage. With this, it becomes easier to implement those elements in the test automation suite. Following are the few most used locators:

Selenium Webdriver architecture is very simple, precise and more efficient. It controls the web browsers like Chrome, Firefox etc directly from OS level. All you need is your IDE for writing Selenium automation script and a browser. While Selenium RC architecture includes one more intermediate server named as Selenium Remote Control Server which acts as a middle layer between your automation script and a web browser. Selenium RC server injects a Javascript code to the browser to fetch the instruction from RC server and execute them in the browser. Then, it relays the browser response to RC server and RC displays the results to you. As Selenium Webdriver directly interacts with the browser, it is much faster and has better performance than Selenium RC which requires an intermediate Javascript program to reach the browser.

While Selenium RC can access any disabled element just like any other Javascript program. Software testers have reported issues in RC to able to access disabled fields.

And the worst part is every browser interprets each command in a different way.

Selenium Webdriver supports headless HtmlUnit browser. It is a very fast browser as it does not need to wait for page elements to load. This invisible browser can accelerate your test execution cycles. However, Selenium RC does not support HtmlUnit browser and it is a bit time taking as compared to Selenium WebDriver.

Setting up a Selenium Webdriver project

1. Download and Install Java 8 and setup the Environment variables in your local System

Since I am going to use Java as a programming language to write Automation script, I will need Java configured in my system to run and execute Java codes in eclipse.

If you get all the list of Java commands and operations in your command prompt, you are all set with Java environment in your system.

2. Download and Configure Integrated Development Environment (I am using Eclipse for this article)

4. Download and Configure Browser Specific Webdriver in your local system

Since I am going to use Chrome browser specific Webdriver, I’ll explain to you how to download and configure Chrome Webdriver in Eclipse IDE.

We are all set with Selenium dependencies and Chrome Webdriver configured in Eclipse IDE and ready to run a sample automation script.

Here is the sample automation script which can be run to automate the web browser using Selenium Webdriver.

This code will launch LambdaTest website and click on the login button to sign in with registered email and password. And then it will run a Real-time test by giving an input URL https://hackr.io and selecting browser and operating system. And finally, it will close the session by clicking on the End session button. After that, the script will launch https://hackr.io website in a new tab and then redirect to the blog page by finding the blog element.

Let’s have a quick look at most used Selenium web driver commands and operations. Since I am using Java language to write automation test suit, I will be mentioned most of the frequently used commands written using Java Syntax.

This is a first and foremost command to write in an automation script. This command is used to fetch and open a web page on the browser.

These commands are used to find the web UI elements to add in Selenium Automation script. These are the elements that are fetched by Find Element or Find elements method of most of the language bindings.

Following are the web element locators:

Developers and testers always want to retrieve the innerText of a web element. This command returns the visible text value.

4. Switching Between Windows and Frames

Common commands for navigating to the webpages.

Selenium WebDriver is one of the most loved choices when it comes to automating a cross-browser script because of the ease of use it offers, the flexibility of language choices and its architecture. It supports various languages, browsers, and operating systems. Also, it is open source which proves to be an icing on the top.

Hope you liked our article. Do let us know your thoughts in the comments section below.