What is Bootstrap? Pros and Cons Of This Framework 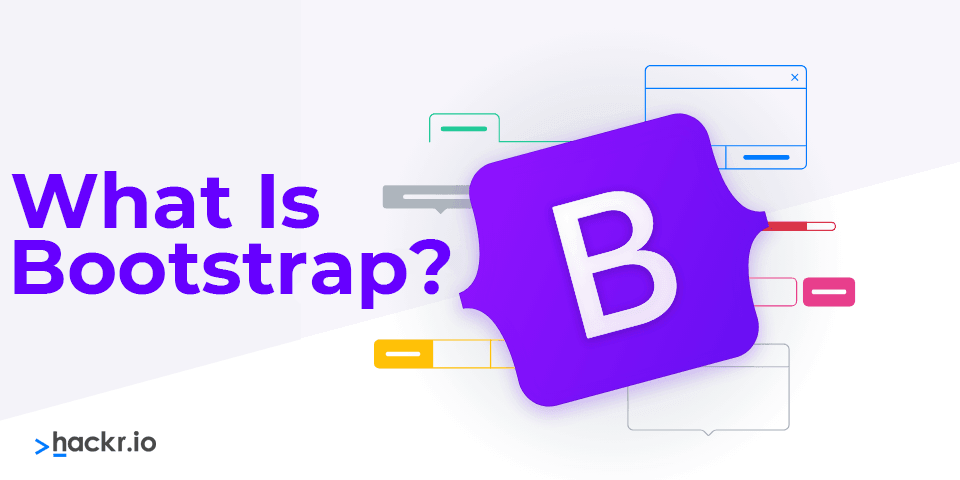 Bootstrap is the world’s most popular front-end web development framework. Based on HTML5, CSS, and JavaScript, Bootstrap makes it possible for developers to quickly launch a fully-featured, mobile-responsive site.

Bootstrap is used for millions of sites across the world today, thanks in part to its free, open-source model. What is Bootstrap in Programming?

In programming, a “bootstrap” to something that launches another system, usually an operating system. In the real world, a “bootstrap” is the little piece at the back of a boot that lets you pull it on. Throughout software development, it refers to a smaller system that boots up a much larger system.

Thus, Bootstrap means that it’s a framework that can be used to launch a website quickly. With Bootstrap, you don’t need to do any of the foundational programs that you would normally have to do. Instead, you can just focus on what’s important — customizing it to your project.

Why Would You Use Bootstrap?

Many developers feel as though they are reinventing the wheel when they need to construct the most basic elements of a website. Bootstrap gives you everything you need to design a clean, effective site out of the box. In fact, you don’t need to write a single line of code if you don’t want to — you can just fill in the content.

Through Bootstrap, developers can: Is Bootstrap Framework Easy to Use?

First, it depends on your background.

Those who already understand HTML5, CSS, and JavaScript should find the majority of Bootstrap a breeze. Bootstrap doesn’t do anything too complex. It’s more-or-less a library. If you go through the Bootstrap files, you will see exactly what it’s doing — controlling, refining, and customizing page elements.

But someone who doesn’t know HTML5, CSS, or JavaScript will likely be lost. At a minimum, a basic understanding of HTML5 and CSS is needed — JavaScript is more likely to be required if you want to perform serious customization of a site.

Second, it depends on what you want to do with it.

It’s fairly easy to get a website up and running with Bootstrap in as little as an evening. If you just want to create a basic site with Bootstrap, you can hit the ground running and get it done ASAP.

But if you want to customize it, it could take a lot longer. Bootstrap makes a lot of things possible, but to edit some more complex things (like animated loading screens), you’ll have to dig deep.

What Does the Bootstrap Framework Include?

Bootstrap contains typography, forms, buttons, navigation, and other interface components such as maps. Depending on the template, the Bootstrap framework can be extended to contain much more.

In fact, the interesting thing about Bootstrap is that because it’s a CSS as well as JavaScript framework, it doesn’t just provide interface elements; it provides style and design elements. When you choose a Bootstrap template, you’re also choosing the font colors, sizes, and styles that you will be using throughout your site.

There are a few resources for free Bootstrap frameworks:

These resources can be used if you want an all-in-one Bootstrap solution. And by viewing these templates, you can also get a feel for what Bootstrap can potentially do for you.

What Are the Advantages of Bootstrap?

There’s a reason why 12 million websites and counting use Bootstrap. It has a lot of advantages:

In brief, it’s easy to use, well-supported, and can save people a lot of time. Bootstrap is currently on its fifth version, and it’s grown a lot throughout its evolution.

But, as with anything, there are some disadvantages, too.

What Are the Disadvantages of Bootstrap?

No technology is perfect. Whether you’re a serious developer or a hobbyist, you should be aware:

As you can see, there are fewer drawbacks than benefits. But you do need to question whether Bootstrap is right for you. Most Bootstrap sites will come out looking somewhat the same, depending on the amount of work you want to do to customize it.

How Do You Use Bootstrap?

Bootstrap is easy to set up. Because it’s just CSS and JavaScript, it’s an array of downloadable files. If you’re familiar with other languages, it’s essentially a library. Your website will connect to these CSS/JavaScript files to display correctly.

That’s it. You now “have Bootstrap.” But once you set it up, you also need to use it. Within the Bootstrap files, you’ll find example files that show you how to use all the elements. In truth, using Bootstrap is often reduced down to a lot of copying and pasting.

You can either manually edit the HTML5 and CSS files or download one of the many popular Bootstrap templates available. For a beginner, it’s often easier to use a template. But you will need to know some HTML at a minimum if you’re going to modify it for your site.

Should You Use Bootstrap for Your Next Project?

If you’re trying to learn how to develop from the ground up, Bootstrap might just hold you back. Bootstrap, as a technology, makes it easier for programmers to never really learn the basics — instead, you deal with the layer of abstraction that’s afforded by the system.

If it’s not important to develop a site from the ground up — or if you’re already an advanced/power user — Bootstrap doesn’t have a lot of downsides. It’s a fast, easy way to create a fully-featured site without having to program every single element.

Are There Alternatives to Bootstrap?

Bootstrap is, by far, the most popular HTML5/JavaScript/CSS framework. Few systems do what Bootstrap does as comprehensively as it does. But there are still some alternatives to Bootstrap for people who want to do something slightly different.

3. Bulma. An open-source CSS framework based on Flexbox. These are the technologies you would want to explore if you want a CSS/JavaScript framework, but Bootstrap didn’t do what you wanted to do.

Bootstrap in the Marketplace

The average Bootstrap Developer salary is $103,000, according to ZipRecruiter. Bootstrap experience is in high demand, not just for front-end developers, but also for full-stack developers. Those who are already experienced in HTML5, JavaScript, and CSS may be able to improve their careers by learning more about Bootstrap.

While there are the other alternatives listed above, none of them have the instant recognizability of Bootstrap.

Bootstrap is a fully developed front-end web application framework. As such, it’s covered in many front-end and full-stack development bootcamps, web development seminars, and online classes.

To learn to use Bootstrap, you can:

What is a Framework? [Definition] Types of Frameworks
Read More

Bootstrap Tutorial (www.tutorialrepublic.com)
Bootstrap 4 From Scratch With 5 Projects (www.udemy.com)
Bootstrap 4: Everything You Need to Know (medium.freecodecamp.org)
Welcome Back
Continue with: