What is a Framework? [Definition] Types of Frameworks 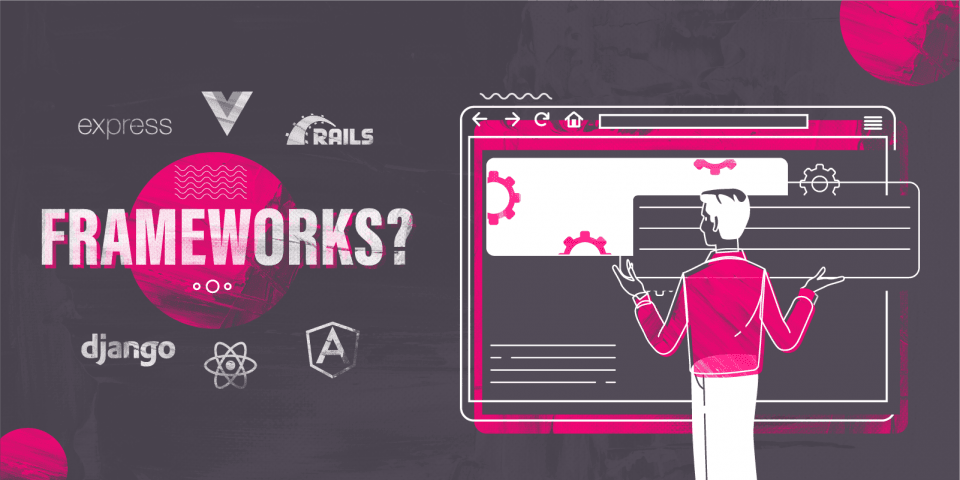 As a programmer, you don’t need to start from scratch when you have tools designed to help you with your projects. Frameworks are software that are developed and used by developers to build applications.

What is a Framework?

Since they are often built, tested, and optimized by several experienced software engineers and programmers, software frameworks are versatile, robust, and efficient.

Why do we use Frameworks?

Developing software is a complex process. It necessitates a plethora of tasks, including coding, designing, and testing. For only the coding part, programmers had to take care of the syntax, declarations, garbage collection, statements, exceptions, and more.

Software frameworks make life easier for developers by allowing them to take control of the entire software development process, or most of it, from a single platform.

Advantages of using a software framework:

What goes in a Framework?

When you install a software framework, the first thing that you need to take care of is the system requirements. Once a framework is installed and configured, it creates a directory structure.

For example, fig. (i) illustrates the directory structure of the Laravel Framework. Each of these folders could have additional directories. Directories can further have files, classes, test routines, templates, and more.

Difference between a Library and a Framework

The difference between a library and a framework is that the latter calls the code. Opposite to this, the code calls the software library. Let us understand this with an example:

When you use a PHP framework, such as Laravel, the relationship gets inverted, and so the software framework calls the application code written in the framework. This is technically known as Inversion of Control (IoC).

A software framework is built on top of a programming language. For example,

Rails, also known as Ruby on Rails, is a web framework built on top of the Ruby programming language.

As a developer, you should be on the lookout for frameworks that best suit your needs. Whether it is working on a website, data science, database management, or mobile applications, software frameworks exist for all genres of software programming.

Angular is a typescript-based, open-source JS framework that makes it easy to build applications on the web. Angular solves application development challenges by combining declarative templates, dependency injection, end-to-end tooling, and much more.

Angular empowers developers to build applications that live on the web, mobile, and desktop.

The popular JavaScript framework is used in public-facing applications and sites such as Google Cloud Platform and AdWords, as well as many internal tools of Google.

Django is a free and open-source web application framework written in Python. Built by a team of experienced developers, Django takes care of web development so that developers can focus on writing applications without reinventing the wheel.

Large organizations actively use Django in its development. Some popular websites developed using Django are:

Laravel is a PHP-based web application framework with an expressive, elegant syntax. The open-source framework and follows a model-view-controller design pattern that is robust and easy to understand.

According to Google Trends, Laravel has secured the position for the most powerful PHP framework, which offers a standardized and feature-packed platform for high-performing PHP web application development.

Over 3,000 companies are using Apache Spark, including top players like:

PyTorch is an open-source machine learning framework that accelerates the process from research and prototyping to production deployment.

Primarily developed by Facebook’s AI research group, PyTorch can be used with Python as well as C++. PyTorch is used for Computer Vision and Natural Language Processing (NLP). Some popular websites developed using PyTorch are:

TensorFlow is an end-to-end open-source framework for machine learning (ML). It has a comprehensive, flexible ecosystem of tools, libraries, and community resources that lets researchers dive in ML, and developers quickly build and deploy ML-powered applications.

Three typical applications for TensorFlow are-

Check out these best data science tutorials and courses.

Ionic is a free, open-source mobile UI toolkit for developing high-quality, cross-platform native applications for Android, iOS, and the Web—all from a single codebase.

Ionic is a development platform for the entire application lifecycle that allows teams to build better and faster applications. Some of the popular applications developed using Ionic are:

Xamarin is a free, open-source application development platform for building Android, iOS applications with .NET, and C#. Xamarin is part of the .NET platform that has an active community of over 60,000 contributors from more than 3,700 companies.

Some of the popular applications developed using Xamarin are:

Flutter is Google’s UI toolkit for building beautiful, natively compiled applications for mobile, web, and desktop from a single codebase. It has an expressive and flexible UI and gives a native performance on iOS and Android platforms.

Some of the popular applications developed using Flutter are:

A Word of Advice Before Starting with Software Frameworks

It is a good idea to learn and develop coding skills by learning the nuances of a programming language before using frameworks for application development. If not, you might miss out on a valuable experience with the underlying technology that exists in a framework.

If you’re not already an expert programmer, then it is essential to understand the code which powers the framework. This knowledge would make it easier when you run into complex challenges and would make you an overall skilled developer.

Many developers support the front-end community by contributing to open-source libraries as well.

The bottom line suggestion for programmers who want to use software frameworks for application development is to learn a new framework or a programming language based on the need for the applications that are to be developed.

Further, analyze areas such as front-end, back-end, cloud management, and mobile technology, the potential market share of the technology, sustainability, and more, and understand the technology features before deciding to sign up with one.

What is Bootstrap? Pros and Cons Of This Framework
Read More

The post is really insightful. It has helped me to understand clearly about frameworks

It seems like all languages doesn't have the ability to create and finish something without being improved and given a name for that improvement, Example React and all other Formed languages are names that was given to the improvement of other known language, ND React was created from JavaScript.

Even python and all other known languages have new Programming language names that was created from them to improve their performance.

Hi, I was on your website, can you give me a summary of the chapter on the framework. I didn't really understand.??

Helped in clearing many doubts..really helpful

It is one the most helping article about frameworks. Nicely and accordingly written work.