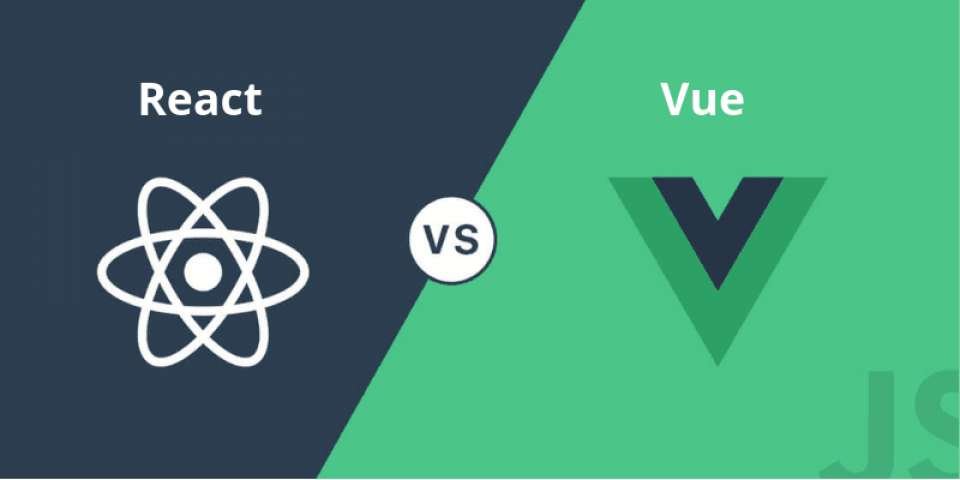 React and Vue are two of the leading JavaScript frameworks that are used for turning oodles of online projects into reality each day. So the question is, which one to pick for your next web development project? Well, it depends on several factors.

Both business requirements, as well as the scenario(s) for which the JavaScript development is required, are two of the most important factors that will help you decide which one to pick, ReactJS or VueJS, over the other. Obviously, both are quite capable.

There are several similarities shared by React and Vue. For example, both make use of the component-based architecture and the virtual DOM, each of them uses props, and debugging is done by means of the Chrome Dev tools in the two JS frameworks.

However, there are several determining differences between Vue.js and React.js that one should know about before making the pick amongst them. Before rushing into them, let’s go through a brief introduction to the two popular JS frameworks.

React made its debut in May 2013. Though Jordan Walke at Facebook is the original author of React, it is developed by Facebook. In addition to the world’s biggest social media platform, the popular JS framework is maintained by individual developers and various organizations.

Developed by Evan You, Vue made its first public appearance in February 2014. Though initially used in China, the JavaScript framework is now globally recognized to be one of the best options for building intuitive web user interfaces as well as SPAs.

Vue.js is an open-source project whose further development and maintenance rest in the hands of its mushrooming community. BuzzFeed, EuroNews, GitLab, Grammarly, Nintendo, and Trustpilot are some of the big names benefitting from VueJS.

React vs Vue: The Battle Begins!

Being around since 2013, combined with the fact that it is being promoted by the social media giant Facebook, React is way much ahead of Vue as the go-to option where work opportunities are concerned. Vue, on the other hand, is still young and gaining momentum.

A couple of years later, there might be a comparable competition between Vue and React developers in terms of job prospects. But for now, there are evidently much more vacancies for React developers than Vue developers.

Borrowing some elements from the functional programming paradigm, ReactJS relies on JavaScript Expressions, popularly known as JSX. In simple terms, JSX is a means of adding HTML code within the JavaScript code.

Everything within the React environment is treated as a component by the JS framework. Moreover, each component has a component lifecycle of its own. For handling these components, React comes with several lifecycle methods.

VueJS has a coding style that resembles much to the web development scenario that was prevalent before the advent of React. In the true traditional way of coding web applications, Vue separates CSS, HTML, and JavaScript.

Like React, Vue.js also has component life cycles. But when put on a comparison scale, they are much simpler and intuitive to use. In addition to taking some important traits from React, Vue also succeeds in solving some of the issues presented by its predecessor.

React is backed by Facebook, the world’s largest social media platform. The most significant benefit of this is that FB has a dedicated team that focuses on developing and improving React on a daily basis. Several internal Facebook products are coded in React.js.

Owing to the substantial involvement of Facebook in React development as well as implementation and promotion, the JavaScript library has garnered attention from the world over its entire run.

Unlike ReactJS, VueJS isn’t supported by any big organization. However, that doesn’t mean that it lacks community support or that it is less popular. It’s that the Vue community is not as big as that of React.js.

Vue came to existence almost 9 months after React was introduced to the world. Moreover, Vue remained popular in its home country i.e. China for its starting years. It gained a loyal global audience some years later. Nonetheless, it is surely headed for greatness.

If you’re someone who thinks that documentation can get only better over time, think again. Even though VueJS is one of the newest JS frameworks, it flaunts documentation that is likely to be the best amongst all the JavaScript frameworks.

Vue.js has been subjected to a great level of praise by numerous developers for its clear and concise documentation. Since it is easy to sift through the concepts, Vue becomes a great option for newcomers and veterans alike.

React follows the old-school tradition of getting better in documentation over time. Initially, React was greatly slammed for its ambiguous documentation. Thankfully, it is much better now and the React development team assures that it will get better with the passage of time.

JSX, an essential aspect of React, initially demands some time and effort even for an experienced web developer. Although it shares some similarities with HTML, JSX is an altogether different approach to web development.

To be able to do a lot with React, a web developer needs to have a good understanding of other important JS libraries. Nonetheless, React becomes a powerful asset with ample learning and practice.

One of the most desirable aspects of VueJS is how easy it is for a JS developer to pick up the JS framework and get started with it. There is an even good thing for React developers switching to Vue that it provides support for JSX.

For a JavaScript developer who has never even tried toReact or Vue before, chances are pretty high that getting started with VueJS will be much easier than starting with ReactJS.

One of the major selling-points of React is its flexibility. For example, React doesn’t come with any kind of built-in routing solutions. Although we have React router, a popular option for routing, it is not an official part of the React package.

For those not in favor of using the React router, there are several third-party solutions to choose from. Also, it is possible to deal with the advanced state management toReact with MobX, Redux, or some other library for state management of your choice.

This degree of freedom might be confusing for some newcomers but surely is a bliss for experienced developers. On the other hand, we have VueJS which is also a flexible framework. However, its ability to be flexible is somewhat limited when compared to ReactJS.

As a part of the official offering, VueJS has:

Note: The Vue framework comes in a bare-bones version just like React. The components mentioned above are available on the official Vue homepage.

Nature of the Framework

VueJS is a true JS framework. Its developer Evan You has stated officially that Vue is almost Angular with several features stripped out to be lightweight and fast.

Unlike Vue.js, React.js is a library in actuality. Having framework-like features that are so convincing that it is regarded as no less than a true JavaScript framework is a different thing though.

Any React developer can easily get started with React Native. Just like ReactJS, the development and maintenance of React Native rest in the capable hands of Facebook. Also, the social media giant made it open-source a few years back.

Unfortunately, Vue has no solution for offering development in the mobile space. Nonetheless, this might soon change as Vue has now joined forces with Weex. FYI, it is a mobile multi-platform UI framework from the Alibaba group.

When compared to Angular, React is considered to be lightweight. However, Vue is even smaller than React. As per the information offered by GitHub Gist, React 16.2.0 + React DOM has a file size of 97.5 kilobytes while the same for Vue 2.4.2 is 58.8 kilobytes.

The entire process of choosing between React and Vue for an official project boils down to the particular scenario as well as your business requirements.

Anyone looking to build complex apps with the potential to expand the same in the future with bringing more developers on board, React might be the go-to choice. However, Vue is the best bet when developing a simple and lightweight app.

When choosing between Vue and React for merely learning, you are free to make the pick as both are great options to learn and advance in JS and web development. The aforementioned points will surely help you make your decision.

React vs React Native: What are the Differences?
Read More

I was going to learn and adopt vue until I understood what was Angular 8. With the improvements in ver 8, there really isn’t any impetus for me to adopt vue. Other than the learning curve, Angular beats react and vue. It is a complete framework. I can go into any angular project and be productive quickly.

Hey Author,
you have explained in very detailed and clearly in this buzzing topic - react-vs-vue.

Both Reactjs and Vuejs are used to build various web applications. This brings us to the question as to Vue.js vs React.js which one works well for developers.