React vs React Native: What are the Differences? 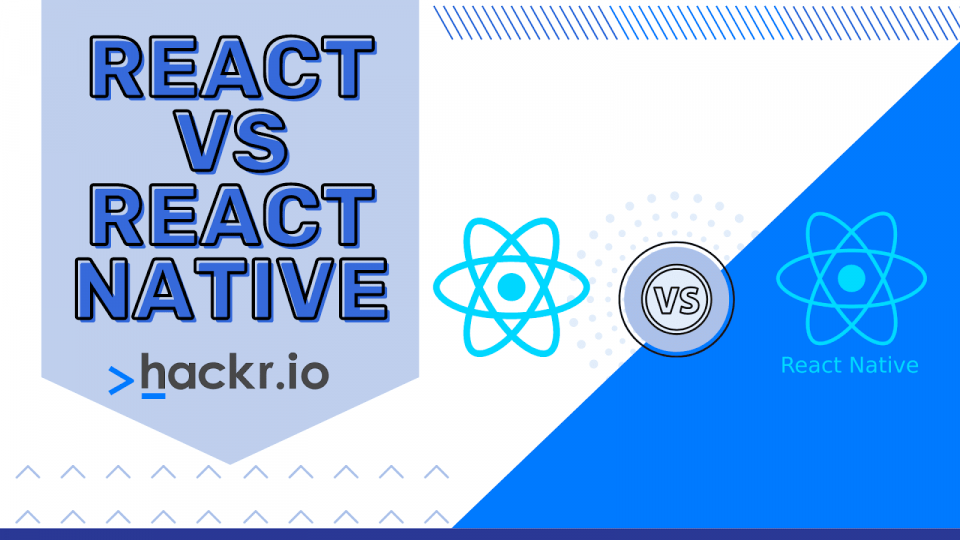 ReactJS and React Native are both Facebook natives that offer unmatched power to mobile app and web development. The differences between the two come down to their functionality and critical purposes.

Today, the differences between React Native and ReactJS are noticeable on websites that are popular all over the world. These two powerful technologies are the foundation of many popular websites and mobile applications.

The conversation examining ReactJS vs. React Native is a common one in the app development field. However, even seasoned developers can be unclear on the nuances in the React vs React Native argument.

The easy way to explain the major differences is: React is more web-based, while React Native contributes to the mobile framework.

But the differences are more in-depth than that — and that’s what we cover in this guide.

History on React Native vs ReactJS

Before developing React or React Native, Facebook was grappling with a couple of issues. One of these was that users couldn't view news feeds and access chats simultaneously.

React (better known as ReactJS), was the first to be conceptualized to resolve some of those issues. ReactJS is a JavaScript library and utilizes a cutting-edge way of supporting the front end and server. In a nutshell, React Native expands on that functionality by providing the framework.

ReactJS came first around 2011 when Facebook engineers noticed that frequent updates to their system were clogging productivity. Before that, Facebook users had trouble switching between their timelines and chats. One Facebook engineer, Jordan Walke, utilized XHP to develop the prototype called FaxJS, which would soon become ReactJS. The application was all Facebook needed to have one of the most intuitive User Interfaces (UIs).

Other applications acquired by Facebook later utilized ReactJS in their programming, including Instagram, a giant leap from relying only on HTML. What’s fascinating about the React Native vs. ReactJS topic is that while ReactJS offers great benefits, React Native is often favored as it can simply do more.

Let’s dive in to see how React and React Native stack against each other:

The technical overview between React vs React Native hinges on the critical components of each. Remember, ReactJS is a JavaScript library that supports the front end to create interactive UIs, whereas React Native supports functionality across a broader set of needs.

As we’ve already highlighted, ReactJS makes it pretty easy for developers to create interactive UIs. By simply using ReactJS, you are 100% sure that your users will view each state of your application.

ReactJS is one of the few tools that can update and render components when your data changes, if not the only one. What’s more, ReactJS gives coders a declarative view, which means it will be painless for you to make your code more predictable and easy to debug.

What is React Native?

React Native is an entirely different development framework. It is technically an open-source model that Facebook launched to improve its mobile applications or any other applications.

Today, React Native offers a myriad of features and reusable components. At its base, React Native uses ReactJS but with totally different libraries. With React Native, developers can expand the reach of ReactJS to platforms that include Windows, Android, and iOS. Since its inception in 2015, there have been over 25,000 apps in the world using React Native.

Differences Between React and React Native

The main difference between React vs React Native is that ReactJS can be used on every platform, while React Native can not. However, there are more subtle differences as well.

For starters, when using ReactJS, developers and programmers can develop a high-performance UI as their own JS library. While with React Native, you can build the entire framework, regardless of iOS or Android.

The following sections will cover some more specific differences between React and React Native.

ReactJS is known to offer better security. The security of React Native can be worse, given its mobile nature.

ReactJS offers more animation at higher levels than React Native. It is done primarily by implementing CSS with ReactJS, whereas React Native relies on APIs to produce animation.

Still, both are used in web development and mobile apps, as they are both flexible and have the advantage of offering reusable components, which improves functionality.

ReactJS is a base of the DOM for the web, whereas React Native functions as a derivative itself. In other words, components are different. While the flow might seem similar, there are some differences in functionality.

ReactJS also has a wide range of limitations, as it is just a library at its base. It offers the advantages of developing a high-performance user interface. React Native, on the other hand, is the framework and not just a language library.

How is code rendered?

How the code is rendered is also a key difference. For ReactJS, you can render code from the DOM, while with React Native, you use APIs in mobile applications. Styling approaches are also different. For instance, you can pair CSS with ReactJS and stylesheets with React Native. Learning ReactJS is quite easy, meaning new developers can get started pretty quickly in developing dynamic web applications. The amount of code is also less, while not compromising on functionality.

The fewer lines of code and the modular nature makes ReactJS easy to maintain. This can allow the developer to focus more on the actual logic behind the project, as opposed to debugging.

ReactJS makes use of reusable components, each having its own logic and controls. You can use these in different projects and greatly streamlines the development experience.

ReactJS is rapidly evolving and to many, this can also be a drawback. For rookie developers, or programmers seeking to enhance skills, a higher speed in a development setting may not be beneficial. It means being flexible to adapt to rapid changes.

External libraries permit developers to expand on what they can and can't use, but ReactJS requires modules external in order to complete an application. The native libraries of ReactJS by themselves won’t do the job as they mostly focus on UI. Furthermore, you will have to understand the external libraries thoroughly, which can be an added burden, and these libraries may also become deprecated, which requires further learning.

Costs Can Be High

Cost overheads are also typically higher with ReactJS than they are with React Native applications. That is because developers may sometimes need to download additional components to use a specific UI, which adds to their overall project time and resource consumption. Like ReactJS, React Native is also easy to learn. After all, it is based on the former. So learning React Native can be a real boost to your development skills if you put the light to moderate effort needed to learn it.

React Native supports multiple systems, and that’s a real boon. You only have to write the code once to deploy it across a variety of platforms.

React Native uses JavaScript, which is a very popular and easy-to-learn language. This makes the barrier of entry low, and it also means you’re adding a valuable language to your skill set.

React Native has strong community support, so if you’re stuck on something, you’re likely to find a quick solution. This can make a world of difference to your development time, and you’re sure to find an answer even if you can’t find a solution that already exists.

Developers often encounter compatibility problems, and compounding this is an inability to debug. However, developers familiar with React Native and these issues are less likely to encounter this and less likely to waste time troubleshooting.

Patenting and licensing issues may also come up when examining the differences between React JS vs React Native. Facebook still maintains full control of React Native, and these patent issues are not going away. Meanwhile, React Native is still offered as an open-source license, but if Facebook has a developer problem, the developer will know about it.

Should You Choose ReactJS or React Native?

Which one is better between React Native and React? Typically, there is no direct answer to this question. Whatever framework you choose must have all the necessary features for the project you are working on.

Also, the final decision will all depend on what developers prefer or what they deem capable of saving organizations time and money. Both factors are critical in deciding which of the two solutions to go. We can’t ignore the fact that both frameworks come with unique features and offer great support from the development community.

Use these two points as a guideline:

Some developers are likely to answer the React Native vs React JS question with: "They both work together very well, so why do you have to choose at all?"

While the two can complement each other well, each is ideal for certain projects. It's essential to pick the right framework, especially to build a dynamic and responsive UI.

When it comes to front-end development, speed and ease of use are key determinants that developers use to decide on the right tool to use. If those two are met, the next considerationis improved SEO, which should be one of your ultimate goals.That's where ReactJS comes in handy. Meanwhile, if you are looking for a solid framework, React Native is the one.

1. Which is Better: React or React Native?

Neither is explicitly better. Choosing React or React Native will depend on the specific problem you are working on.

2. Is React the same as React Native?

No, React is a component, while React Native is a framework. They complement each other.

3. Should I Study React or React Native?

Ideally, you should study both. However, you may want to learn React first as a lot of React Native is based on the former.