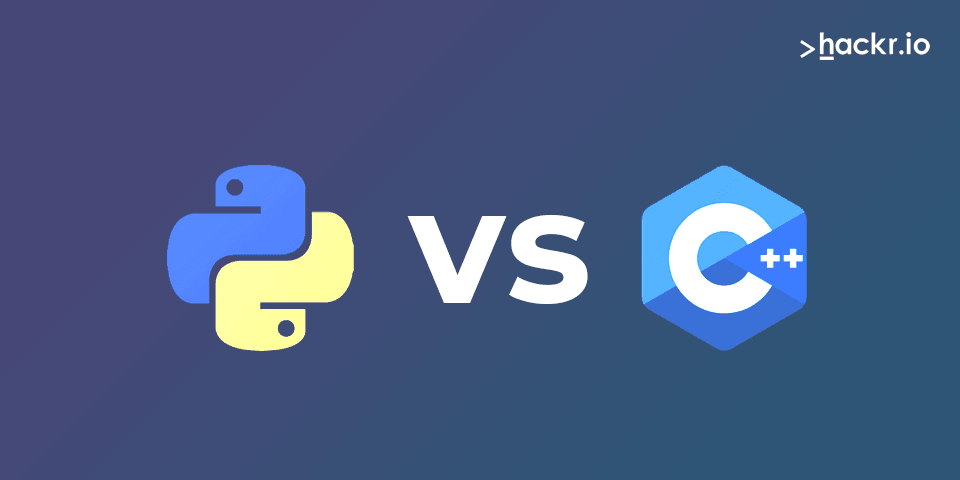 Python and C++ are both exceptionally popular general-purpose programming languages — but that’s where their similarities end.

While Python is strongly influenced by C++, they are two completely different languages. Python is easier to learn but sluggish to run. C++ has faster, more efficient execution, but it can take years to truly master. Are those the only distinctions? Apart from execution, what’s the difference between c++ and python?

Today, we’re going to take a look at the differences between Python vs C++. An easy way to compare the two languages is to view the differences in their code.

A complete “Hello World” in Python:

As you can see, C++ is significantly more involved even for comparatively simple tasks. But the lack of line termination with Python can likewise make C++, Java, or even PHP programmers uncomfortable. To learn the difference between python and c++, let’s take a look at some pros and cons for each.

Many of Python’s benefits lead directly to its challenges. It’s easy to learn, but that also means that it’s easier to make mistakes — it’s an interpreted rather than compiled language, but that also leads to runtime errors.

Here are the major pros and cons of Python development.

Python was strongly influenced by C++ but went in a different direction, creating a language that is highly portable and suffers under fewer constraints. However, fewer constraints may also lead to potential memory leaks and performance issues.

Here are the major pros and cons of C++ development.

As you can see, C++ is harder to learn than Python. But it’s also more efficient and reliable in many contexts.

Let’s take a deeper look at Python vs C++ when it comes to difficulty, speed, popularity, job outlook, and salaries.

Most agree: Python is the easier language to learn. Python is easier to read and understand and easier to start programming with right away. This is due to a combination of features: its syntax is cleaner and clearer, it’s dynamically typed rather than statically typed, and it’s an interpreted language rather than a compiled language.

That being said, there are some advantages to starting with a more difficult language. Those who program in C++ can move smoothly to other programming languages like Java or C#, whereas someone moving from Python may find even a jump to JavaScript difficult. While Python is easier, a lot of this ease of access comes from a lack of strict controls and a simpler syntax, which can make Python feel clumsy to an experienced programmer.

In terms of speed, C++ wins. A major advantage to its strict typing and rigid syntax constraints is that the language is simply more controlled and more efficient. Python can run sluggishly — not a problem in most scenarios, but it can hinder the scalability of resource-intensive applications. C++ is usually chosen for lightweight development for this reason.

For most applications, system speed isn’t going to be a problem. As computing systems become more advanced, raw speed becomes less important than development time, maintenance time, and general user experience. Still, if you were working with a Raspberry Pi or an IoT device, C++ would be preferable over Python.

Python has significantly more market share than C++; it’s 8 million vs. 6 million. But both languages are very popular. On Github, a developer can find more than enough information to support either Python or C++ development. On StackOverflow, a developer asking a question about either language should see well-qualified answers very quickly. For that reason, even though Python is more popular than C++, this is essentially a draw.

In the future, this might not always be the case. Realistically, C++ is fading while Python is growing. But C++ is also fading because there are other strong alternatives; it’s not just losing traction to Python. Java, JavaScript, and even C# are growing in market share due to the proliferation of web applications vs. desktop applications. Because Python can be used for web applications more easily than C++, Python is also seeing its share of web-based growth.

Of course, most developers are less concerned with C++ vs Python speed and more concerned with which language will make them hireable. Here’s the good news: a C++ and a Python programmer should both find it pretty easy to get a job.

While there’s no specific repository of C++ and Python jobs, comparisons can be made using job marketplaces. As of 2021, Indeed has 80,000 C++ jobs posted. Comparatively, there are 203,000 Python jobs available.

Employers are hiring for Python jobs in far greater volume than they are hiring for C++ jobs. For many, it appears that C++ is “on the way out” — it’s an older language that is losing market share to newer languages as time goes on.

But there’s one confounding factor — and that’s salary.

Why does it pay more to be a C++ developer? It’s because there are fewer of them available and it’s harder to master the C++ language. There’s also a broader range of Python development jobs, from small-scale mobile development to large-scale enterprise application development.

If you’re already an expert C++ developer, then you can command a very high salary. Even if fewer people are developing new applications in C++, there are still older applications that have to be modified and maintained.

But if you’re a developer just starting your career, you’ll find that there are far more Python jobs available, and Python takes much less time to master. Over time, Python jobs will likely start paying more because companies will continue to transition away from C++ platforms.

How Can You Learn Python or C++?

Python and C++ can be learned in the same way — through a combination of classes, tutorials, and boot camps.

Classes and tutorials provide foundational knowledge. But boo tcamps and projects create working knowledge, something that’s desperately important for those who actually want to build a career.

A few great options to learn Python include:

Likewise, you can learn C++ with:

Most people will use a few tactics to learn a programming language. They may take a course, read a book, and start creating a portfolio project before the language really “clicks.” Working on an involved personal project can be a great way to learn more.

How Do You Start a Career as a Python or C++ Programmer?

Whether you have a degree in computer science or not, you need to be able to show that you know the language. This usually begins through language-related certifications, which will test your general knowledge of the language, its functions, and its syntax.

Once you have certifications in hand, employers usually want to see a portfolio and usable code on Github, regardless of the language that you decided to learn. A portfolio should be made of at least three to four commercially viable projects that you worked on — mobile applications, small games, web apps, and more.

Before you start interviewing, you should also review interview questions. Many programming interviews today are just a sequence of “code interview” questions. They may ask you to traverse a sorted tree, to create your own sorting algorithm, or otherwise to solve a programming problem in a unique and creative way.

Should I Learn C++ or Python?

So, Python vs C++: which is best? Both Python and C++ are strong general-purpose languages that have a very stable market. Both will teach you the foundations of programming and computer logic — and they actually aren’t as far apart as they might seem.

Beginners are more likely to have success learning Python, at least at first. Anyone who knows one language will likely find it fairly easy to learn the other.

That being said, it’s not always a question of Python or C++. A developer can always learn both.

Ready to test your knowledge of Python or C++? Get Certified Today!