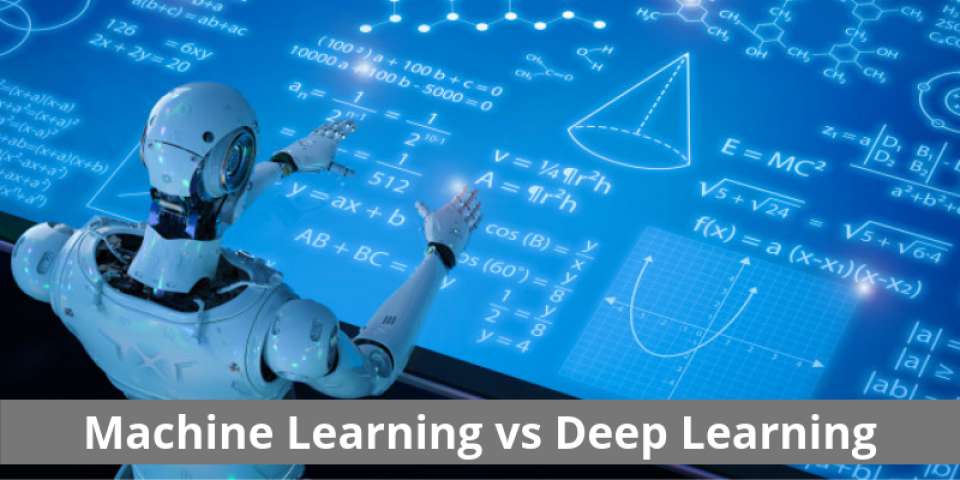 In order to make the most out of them, it is important to know how the two subsets of AI differ. Before discussing the various prominent differences between machine learning and deep learning, let’s first get a brief idea about AI, followed by brief descriptions of the two contenders.

AI – This is Where Everything Starts From!

For now, we are still in the premature stages of AI. What this means is that machines that can have reasoning, speech, and understanding levels comparable to human beings are a distant reality. Any AI-powered machine can be listed among one of the three categories:

Machine learning or ML is a subset of AI. The most fascinating aspect of machine learning is its ability to modify itself when new data is available. This means that ML is dynamic in nature and doesn’t necessitate for human intervention for making changes or modifications.

ML has proven to be a great tool for analyzing and identifying patterns in datasets of varying sizes. The main idea of machine learning is to train a computer or machine to automate tasks that are either exhaustive, impossible, or redundant for an individual to perform.

According to Arthur Samuel, a pioneer in machine learning, ML is a,

“Field of study that gives computers the ability to learn without being explicitly programmed.”

This suggests that machine learning programs aren’t explicitly entered into a computer using if-then and other statements.

In a way, ML programs adjust themselves as a response to the data to which they are exposed to. Although learning ML doesn’t necessitate for having prior AI knowledge, it certainly helps to have a good understanding of AI.

Machine learning makes use of data to feed an algorithm capable to understand the relationship between certain input and output. As soon as the machine completes learning, it can predict either the value or the class of the new data point.

A deep learning model is a software that is capable of mimicking the network of neurons found in the human brain. Typically deep learning refers to mostly deep artificial neural networks and rarely to deep reinforcement learning.

A deep learning machine makes use of various layers to learn from the data provided. While a shallow network has only one hidden layer, a deep network has multiple layers. A typical deep neural network has three types of layers:

As a set of algorithms, deep artificial neural networks has set unprecedented records in terms of accuracy for several important problems. These include image recognition, natural language processing, recommender systems, and sound recognition.

In fact, deep learning is responsible for the creation of DeepMind’s critically-acclaimed AplhaGo algorithm. In 2016, the deep learning algorithm was able to defeat former Go world champion Lee Sedol.

Multiple hidden layers let deep neural networks learn features of available data in a feature hierarchy. Simple features, such as pixels, recombine multiple times in the next layer to yield more complex features, such as lines and shapes.

One of the distinctive features of deep learning is computational intensity. This is why powered-up GPUs are required for training deep learning models.

Unlike machine learning algorithms, deep learning algorithms require up to several weeks to finish execution. This is due to the fact that a deep artificial neural network requires computing a significantly large number of weights and additional parameters.

In feature engineering, domain knowledge is used for creating feature extractors. These reduce the complexity of the data as well as enhance the visibility of patterns. The trade-off for the benefits of feature engineering is that it is time-consuming and requires a high level of expertise.

In the case of deep learning algorithms, there is no requirement for understanding the features or best feature that represents the data. To put simply, DL algorithms don’t require feature engineering. However, the inverse is true for machine learning algorithms.

Machine learning comprises of an array of algorithms. While some of them are easy to interpret, such as decision tree and logistic, others are almost impossible to interpret, including SVM and XGBoost. Thus one can say the interpretability of ML varies from easy to impossible.

In the context of deep learning, the interpretability is difficult to impossible. This is the primary reason why implementing deep learning in industrial applications is still a rarity.

Machine learning algorithms perform exceptionally well on a dataset that is small, medium, or somewhere in between. On the contrary, DL algorithms fail to perform well for such datasets. Instead, they perform better for bigger datasets.

Machine learning algorithms are used for parsing data, learning from that data, and make informed decisions based on this very learning. On the contrary, deep learning is used for creating an artificial neural network, capable of learning and making intelligent decisions by itself.

Some Notable Applications of ML and DL

Although each of them has several independent applications, the combination of the two facets of AI has demonstrated to reach new heights of success in various research fields.

Hope this article will help you build a clear understanding of the various important differences between deep learning and machine learning models.

Machine learning is a fast emerging field and has applications in almost every area of study. It is a quick way to resolve problems that are extremely difficult or time consuming.