JSON vs XML in 2022: Comparing Features and Examples 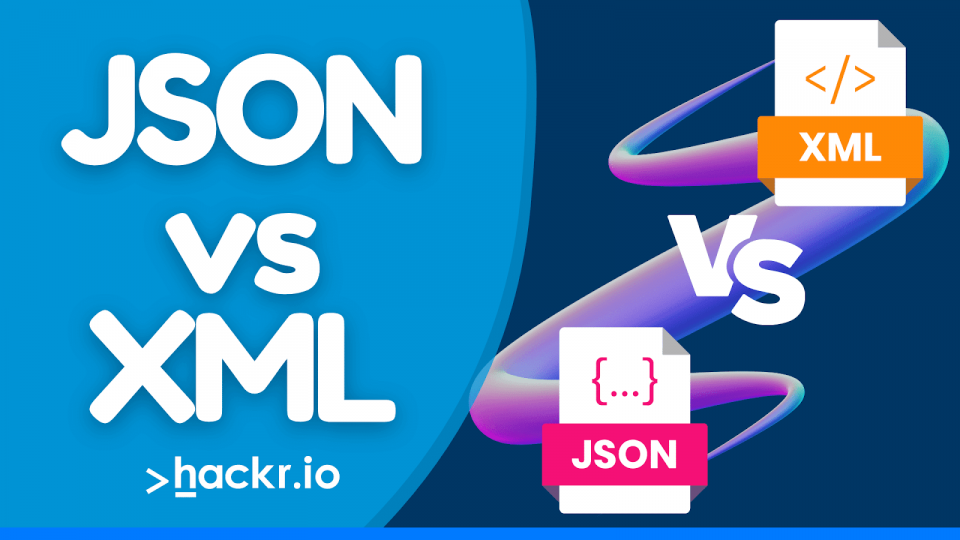 Both JSON and XML have been around for decades, though XML is a bit older. Developers have used both extensively, and each comes with its own set of unique features.

Here, we’ll explain the differences between JSON and XML, while also talking about what both actually are, and their individual pros and cons. If you’d like the short answer, you can check out the summarized table below; we go into the details after.

XML (Extensible Markup Language) is the default choice for data interchange because virtually every language has a parser for it. It is an application of SGML and was compiled by a working group of eleven members. Its first draft was published between August and November 1996 at Sun Microsystems, and the first version of XML was released in February 1998.

It is easy to fetch particular data from XML and there are schemas that can validate the XML. XML is used extensively in today’s online world – banking services, online retail stores, integrating industrial systems, among other things. The JSON (JavaScript Object Notation) data format was first specified by Douglas Crockford in March 2001. Its official website launched in 2002, and by 2005 Yahoo started offering its web services in JSON. It soon became an ECMA international standard by 2013. The most recent JSON format standard was published in 2017.

A better option for XML for data transfers, JSON requires less coding and has a smaller size, making it faster to process and transmit data. While it is written in JavaScript, it is language-independent. However, it doesn’t have any of the powerful validation and schema-related features that XML has. So, what makes JSON so popular?

With the popularity of REST APIs over the SOAP/WSDL model, JSON gained momentum in the programming of API code and web services. It is text-based, light-weight, and has an easy-to-parse data format requiring no additional code for parsing.

JSON thus helps in faster data interchange and web service results. So for web services that need to just return a lot of data and display the same, the ideal choice is JSON.

Structure of XML vs JSON

As we see, the tag structure certainly adds some complexity, while the JSON format seems like reading a simple text! Additionally, with JavaScript-based frameworks like Node.js becoming more popular, getting data in JSON format makes it easy to load data into an object tree.

Another instance where JSON triumphs over XML is when you want to export data from a web app to a database. JSON is a perfect file format for such conversions because every programming language is capable of parsing JSON – a truly open standard and interoperable format!

JSON has bigger roles to play in the future as with the advent of cloud computing and APIs, the need for proper storage and transfer of data is huge now and is likely to grow further in the future.

The Difference Between JSON and XML in a Nutshell

XML (Extensible Markup Language) has been around for more than 3 decades now and it is an integral part of every web application. Whether a configuration file, mapping document, or schema definition, XML made life easier for data interchange by giving a clear structure to data and helping in dynamic configuration and loading of variables.

JSON stores all of its data in a map format (key/value pairs) that is neat and easier to comprehend. People cite the ease of data modeling or mapping directly to domain objects as the main advantage of JSON over XML — which makes it more predictable and easy to understand the structure. Bear in mind that not everyone agrees with this.

For starters, JSON is just a data format whereas XML is a markup language. You can actually place a query and get your answer through XPath. Similarly, metadata, attributes, and namespaces can be added in XML. Further, XML along with XSL, XSD, XQuery, etc. makes for a powerful combination. These are some important features that still make XML a worthy choice.

In any case, if a project requires document markup and metadata information, it is better to use XML. Otherwise, for a more organized data interchange, JSON could be your preferred choice.

Both JSON and XML focus on a somewhat similar purpose, but the choice comes down to the details. The bottom line is that if you have simple data exchanges that disregard semantics and validation, go for JSON. However, even with JSON, it is essential to learn XML and related technologies to do more than just data exchange and fast processing. JSON still has a long way to go before it comes at par with the powers of XML, but has its conveniences.

Which is better: XML or JSON?

There is no direct answer to this question as both are tools that have their own use cases. It depends on what your purpose is. If you want simple data exchanges, JSON is better.

How is XML different from JSON?

XML allows you to create custom makeup languages and has a lot of features. JSON is a data-interchange format that provides a specification for data encoding.

When should I use JSON?

You should use JSON when you create software that communicates with a browser or mobile application. It is designed for exchanging data.

Is JSON faster than XML?

Yes, JSON is faster than XML because it is lightweight. The JSON parser is less complex and takes up less memory.

The XML Examples are not displaying properly in the dark boxes. Since I know XML. I can visualize what they should look like but for others it makes the comparisons seem odd.

Good article but skims over and muddles up a few things...

Article states - "Cons of XML: It doesn't allow the user to create his tags."
err... But that's kinda the whole point of xml, since it is a meta-language, meant for creating new mark up languages, i.e 'tags'.

Article states - "XML separates the data from HTML"
This doesn't make sense. HTML is an application of SGML, a separate thing entirely, and doesn't have much to do with xml directly.
If sgml is html's dad, then xml is akin to html's 'step dad'- even though it's younger.

In the history of xml section, you state that "xml is an application of sgml". This is not true. xml is a subset of sgml, then used to replace sgml as a meta-language (or template),
and is used for creating new flavours of xml (via DTD or other schema).

sorry to be picky.
xml and json are different tools, with only a partial overlap. I expect they'll co-exist happily for some time.

How do I create an XML schema in Excel?

You can easily convert your Excel file to the XML file and can do vice versa. You can also exchange data between different applications. You can follow the below steps to create an XML schema using Excel-
Turn on the Developers tab.
Create a schema for the XML data that defines the XML file structure. This step will be done outside Excel. The tags represent the column name.
Save the XML code with schema.xml.
Open data-set.xlsx.
Select source from Developers tab under XML which will open the XML source task pane.
Select XML Maps to add XML maps.
XML maps dialogue box will open, select add from there.
Select the schema.xml file that we created in step 2.
Now you can drag the elements from the tree on the left pane onto the worksheet to map the data.
Click export from the Developers tab under XML.
Save the file as data-set.xml and click enter to complete the process.

What program is used to open XML files?

How do I convert an XML file to a readable file?

Open the XML file with help of Notepad or using an XML editor.
Click on "Edit" under the File menu and click "Select All." to select all the content in the XML file in one go.
Right-click the highlighted text and select "Copy."
Open Microsoft Word to create a new document and make sure that all the options in Word are set to the defaults.
Click on the "Edit" option under the file menu and select the "Paste Special." option.
Scroll down to select the "HTML Format" option which will paste the XML over to the document in its original format.
Save the document as a .doc file to complete the process.

Is JSON faster than XML?

JSON is light-weight as compared to XML and there are some other factors that make JSON as the better alternative for XML. Yes, JSON is faster than XML as XML is more verbose to explain the code better. But parsing an XML software is complicated and time-consuming. But DOM parser manipulates the libraries which make your application consume large memory due to verbosity of the code that incurs the cost for parsing XML files.

How XML is more secure than JSON?

XML is more secure than JSON because of the following reasons-

XML represents encrypted elements within the standard element tags that allow parsers to parse the encrypted elements during the validation process.
XML allows you to encrypt only the desired elements instead of encrypting the whole document. So that you can include a number of secret data for different recipients within a single document.
You can encrypt different parts of the document with different keys that allows multiple users to decrypt the same file with the data intended to them.

Do I need to keep XML files?

Yes, there are many reasons that allow you to keep XML files.

XML allows you to identify the data in a correct way that will be understood by the computer.
XML handles the document consistently without any structural errors as it provides a standardized way to control the type of document structure.
XML provides easy and durable for storing and transmitting the data.
XML provides a common syntax for exchanging information among applications.
You can easily change the XML information via scripting.
You can separate the form from content using XML.

Yes, you can say that the XML is RESTful. REST follows some methods like GET/PUT/DELETE/POST/OPTIONS which allows CRUD like mentality to create, edit and return the data which is exactly the same with XML. so, we can consider XML as RESTful. Also, XML supports hypermedia type which makes it RESTful.