15 Best Machine Learning Libraries You Should Know in 2023 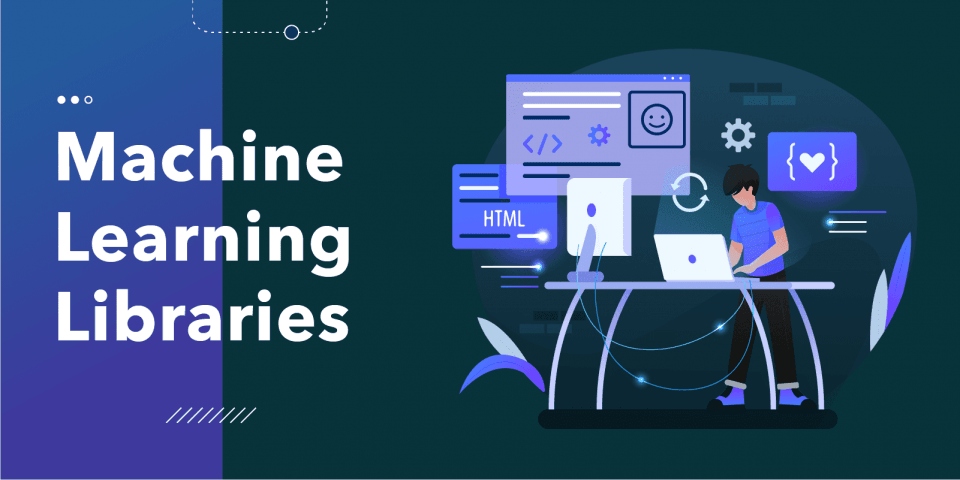 Coined first by Arthur Samuel in 1959, Machine Learning or ML is that part of AI that bestows machines the ability to learn and make them improve on their own.

With ML, developers can train machines to learn from their own experiences without explicitly programming to do the aforesaid. To accomplish so much using machine learning, we have a range of frameworks, tools (kit)s, modules, libraries, and so on. We’ll focus on ML libraries here.

Typically, a ML library is a compilation of functions and routines readily available for use. A robust set of libraries is an indispensable part of a developer’s arsenal to research and write complex programs while saving themselves from writing a lot of code.

Libraries save developers from writing redundant code over and over. Also, there are all sorts of libraries to deal with different things. For example, we have text processing libraries, graphics libraries, data manipulation, and scientific computation.

As machine learning continues to give humanity new possibilities and woo newcomers, hundreds of ML libraries also have active development. Not all of them are great, though. The good news, however, is that several of them are.

P.S. - This article is strictly limited to explaining ML libraries ONLY! Hence, no modules and packages. For instance, statsmodels is an extremely efficient ML option for implementing statistical learning algorithms and time series modeling; however, it is a package and not a library. Implemented using the C++ programming language, Armadillo is a linear algebra library employed for accomplishing the purposes of scientific computing. In addition to machine learning, Armadillo finds uses in:

Armadillo features a delayed-evaluation approach, which is achieved via template metaprogramming, for combining many operations into a single unified operation. This reduces or even eliminates the requirement of temporaries.

The Armadillo library offers a functionality resembling MATLAB and high-level syntax. The library is suitable for developing ML algorithms in C++. It also has the ability to implement research code into production-ready environments quickly. Written in the C programming language, FANN provides support for both fully connected and sparsely connected neural nets. Since its advent in 2003, the machine learning library has been extensively used for research in:

FANN is an extremely easy-to-use library and comes with thorough, in-depth documentation. It is suitable for backpropagation training as well as evolving topology training.

Keras is an open-source library that runs efficiently on CPU as well as GPU. It is used for deep learning, specifically for neural networks. The popular ML library works with the building blocks of neural networks, such as:

Other than the standard neural nets, Keras also provides support for convolutional and recurrent neural networks. The ML library also packs a plethora of features for working with images and text images.

Matplotlib is a ML library employed for producing publication-ready figures, images, and plots in a range of formats via 2D plotting. Using only a few lines of code, the Matplotlib library allows generating detailed, high-quality:

Although Matplotlib is fairly user-friendly, users accustomed to the MATLAB interface will find it even easier to get on board, especially using the pyplot module. The ml library offers an object-oriented API using standard GUI toolkits like GTK+, Qt, and wxPython to embed graphs and plots in applications. Written in: C++
Since: February 2008
Developer: Georgia Institute of Technology and the mlpack community
Used as: Software library

Built on top of the popular linear algebra library Armadillo, mlpack is an ML library that emphasizes ease-of-use, scalability, and speed. The primary intent of the mplack library is to offer an extensible, fast, and flexible way of implementing ML algorithms.

Although meant for C++, bindings for mlpack is available for Go, Julia, Python, and R programming languages. It also features simple command-line programs and C++ classes that can be integrated into large-scale ML solutions. NLTK stands for Natural Language Toolkit. As the name suggests, it is a Python library intended for NLP tasks, like language modeling, named entity recognition, and neural machine translation. The machine learning library fulfills one and all text processing needs, including:

Interestingly, NLTK is not just a single ML library, but, instead, a collection of libraries (and programs).

NumPy is a contraction for numerical Python. That name clearly suggests that it is a library intended for computation. Using the Python-based library allows developers to save a lot of time in scientific computations that involve heavy matrix operations.

The NumPy library leverages a special class of arrays, dubbed Numpy arrays, that perform vast matrix-based calculations in mere milliseconds. This is made possible due to the implementation of the Numpy arrays in the C programming language.

Due to the aforementioned, NumPy has become one of the most beloved libraries/packages for machine learning, especially natural language processing.

OpenNN is an open-source machine learning library that leverages ML techniques for solving data mining and predictive analytics problems across various fields. The library has been employed for dealing with problems in chemistry, energy, and engineering.

The primary advantage of using OpenNN is its high-performance. This is attributed to the library being developed in the C++ programming language. The ML library features sophisticated algorithms and utilities to accomplish classification, forecasting, regression, et cetera.

pandas are the go-to machine learning library when it comes to dealing with gargantuan proportions of tabular data. Pandas is to Python what Microsoft Excel is to Windows. The ML library cuts the effort required for big, complex calculations to a mere few code lines.

Also, pandas feature a long list of pre-existing commands that will save ML developers from adding code for various mathematical operations. Aside from data manipulation, the Pandas library also helps in transforming and visualizing the same. The pandas library leverages two main types of data structures:

Data scientists rely on pandas to cut the clutter of writing boilerplate code and focus more on the actual problem-solving associated with the tabular data at hand.

Torch, now defunct, is a deep learning library for the Lua programming language. Facebook took it and built it into a library that has become one of the leading Python machine learning libraries, PyTorch. Here Py represents Python.

PyTorch isn’t as popular as TensorFlow but gains the upper hand over the latter with the execution of Dynamic Graphs. When researching, especially while working with low-level APIs, the ability to model components on the fly is desirable. The ML library allows doing so.

Written in C and Python, Scikit-Learn enjoys a growing, loyal community that includes programmers, machine learning hobbyists, and IT professionals worldwide. It is built on top of NumPy and SciPy, two of the most popular ML libraries for scientific computation.

The only issue with the Scikit-learn library is that it doesn’t offer good support for distributed computing aimed at large scale production environment apps. Hopefully, it will get fixed in the upcoming releases of the popular ML library.

In addition to working with the NumPy arrays, SciPy is designed to offer efficient, user-intuitive numerical functions. The library relies on the NumPy module for array manipulation subroutines.

Shogun is a free and open-source machine learning library that offers a wide range of machine learning algorithms and data structures. Unlike other popular ML libraries, Shogun focuses on kernel machines for classification and regression problems. The ML library provides support for:

Implemented in C++, Shogun offers a single platform for combining several algorithm classes, data representations, and general-purpose tools for quick prototyping of data pipelines. The library flaunts a reliable community that includes professionals from around the globe.

TensorFlow is among the best libraries available for accomplishing deep learning. Developed by Google, the ML library is a get-it-started-instantly option for product-based firms as it offers excellent model prototyping, production, and everything in between.

Despite all its perks, the machine learning library is criticized for its lousy implementation of graphs. This is because the library demands compiling the graph first. Hopefully, we will witness it get better at the aforesaid with the future rollouts. Built on top of NumPy, Theano is one of the speediest machine learning libraries. It offers tight integration with NumPy and an interface very much similar to the aforementioned. Theano works as an optimizing compiler for evaluating and manipulating:

Although Theano can work on both the CPU and GPU architectures, working on the latter yields speedier results. The GPU's machine learning library can be as much as 140 times faster while on a CPU when performing data-intensive computations.

As already told, there are hundreds of thousands of machine learning libraries. That means that the entries on the list we’ve presented aren’t the only best ones. Explaining all of them, however, goes beyond the scope of this write-up.

Hence, this section is dedicated to briefly cover some more great machine learning libraries available out there. Here’s the list:

This is now the end of the 15 best machine learning libraries article. No matter the programming language or the area a developer is working in, learning to work with libraries is important. Doing so helps in decomplexing the things and to cut the tedious effort.

Libraries come and go; however, the knowledge stays. Once you become well-acquainted with libraries' underlying concepts, you can easily switch out or expand to other available options. All the best!

Do you agree with our list? What libraries should or shouldn’t be on the list? Let us know via comments. Want to become better at machine learning? Try these best machine learning tutorials.