Why should you learn Angular? 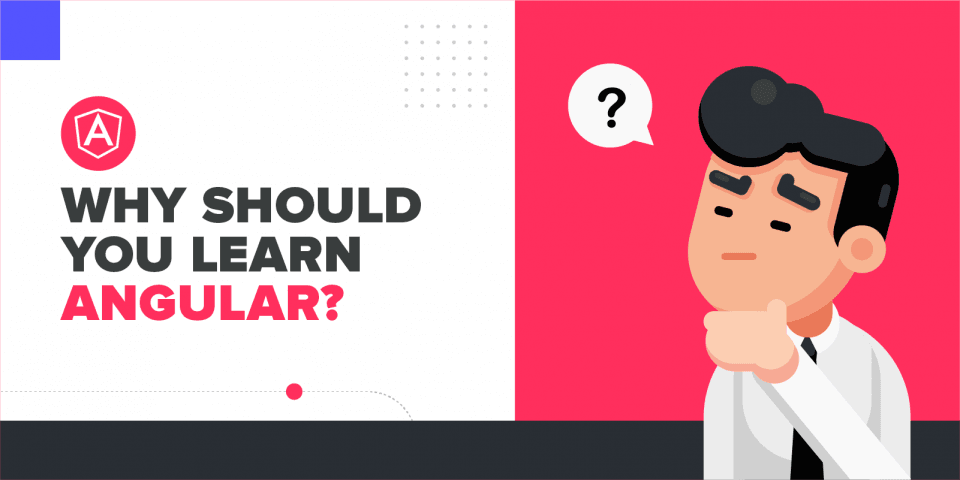 Angular is a Javascript framework that is used by developers for building web, desktop, and mobile applications. Development of Angular applications involves usage of Typescript, which is a superset of Javascript, along with HTML, CSS etc. The code written in Typescript compiles to Javascript and is rendered in the browser. Angular is one of the most popular Javascript frameworks for building web applications. There have been three popular versions of Angular to date -- Angular 1 (also known as AngularJS), followed by Angular 2, which was succeeded by Angular 4.

You must be wondering that why did Angular 3 not get released? Well, there were some versioning issues with the modules internally. Hence, the Angular team decided to skip the release of version 3 of Angular and directly went on to release Angular 4. Version 5 and 6 of Angular have also released recently, and Angular 7 will be released in September or October 2018. Since Google has pledged to upgrade Angular twice every year, new versions of Angular come up frequently. However, Angular 4 is as of now the most popular among them and is widely used. All the Angular versions from 2 and above are backward compatible.

There are several advantages of using Angular, some of which are mentioned below.

Single Page Applications are a type of web application that loads a single HTML page, and the page is updated dynamically according to the interaction of the user with the web app. Single Page Applications, also known as SPAs, can communicate with the back-end servers without refreshing the full webpage, for loading data in the application. SPAs provide better user experience as no one likes to wait too long for reloading of the full webpage. Angular supports the development of SPAs, and hence is worth learning!

You can think of modularity in Angular as if the code is organized into “buckets”. These buckets are known as “modules” in Angular. The application’s code is divided into several reusable modules. A module has related components, directives, pipes, and services grouped together. These modules can be combined with one another to create an application.

Modules also offer several benefits. One of them is lazy-loading, that is, one or more application features can be loaded on demand. If properly used, lazy-loading can increase the efficiency of an application a lot.

Enterprise applications can grow very large, and hence dividing the labor across multiple teams could be challenging. With modules, the code can be kept organized and division of labor can be done properly while maintaining the code consistency.

Many web developers want to write short but effective code. Angular supports MVC (Model View Controller) architecture, where the developer has to just split his/her code to fit into the MVC structure, and the rest is taken care by Angular. There is no need to write the MVC pipeline.

Angular uses HTML for defining the user interface of an application. HTML is intuitive, declarative, and less complex than Javascript. In a declarative user interface, the presentational logic is separated from the imperative logic. We don’t need to be concerned about the program flow and the order of loading of components on the webpage. We can simply define the layout of the page, make it clear where the data is being bound, and what it is being bound to. Angular will take care of the rest.

Angular integration is pre-built into several frameworks, for example, Ionic, Telerik’s Kendo UI, Wijmo, etc. Hence, integration of third-party features is easy with Angular. So, if you want to add some high-quality user interface components, you can easily do so by using any of the above-mentioned frameworks!

Angular can be used to make any of the following types of applications:

There are several large and popular websites that are built using Angular. Some of them are as follows:

There is a huge demand for Angular in the market, which has increased jobs for people who are skilled in Angular. Another reason to learn Angular in 2020!

Which version of Angular should you learn?

Since AngularJS is very different from the Angular versions 2 and above, many companies generally prefer 2 or higher version of Angular. Angular 5 and 6 have released recently, and have backward compatibility with Angular 2 and 4. Both Angular 2 and 4 are good choices for the development of enterprise applications with high standards for code reliability. However, Angular 4 applications are smaller and faster than Angular 2 applications and use TypeScript version 2.2, which is the latest TypeScript version. Hence, it makes sense to learn Angular 4 in 2018. However, you can learn Angular 5 or 6 also.

Considering the huge advantages of using Angular and a massive demand for this skill in the market, it is surely advisable to learn Angular

If Angular doesn't attract you then we have got you covered: Top Angular Alternatives.

Thanx for this info., Great Article !

Cross Platform ? when you create default Angular8 page : localhost:4200 can not open/show on IE 11 , and Safari

Thanks for Share Great Article On Need of Angular.

Nice respond in return of this difficulty with real arguments
and telling the whole thing regarding that. Real Madrid Fodboldtrøjer

What's up everybody, here every one is sharing such
experience, thus it's good to read this webpage, and I used to pay a quick visit this weblog everyday.