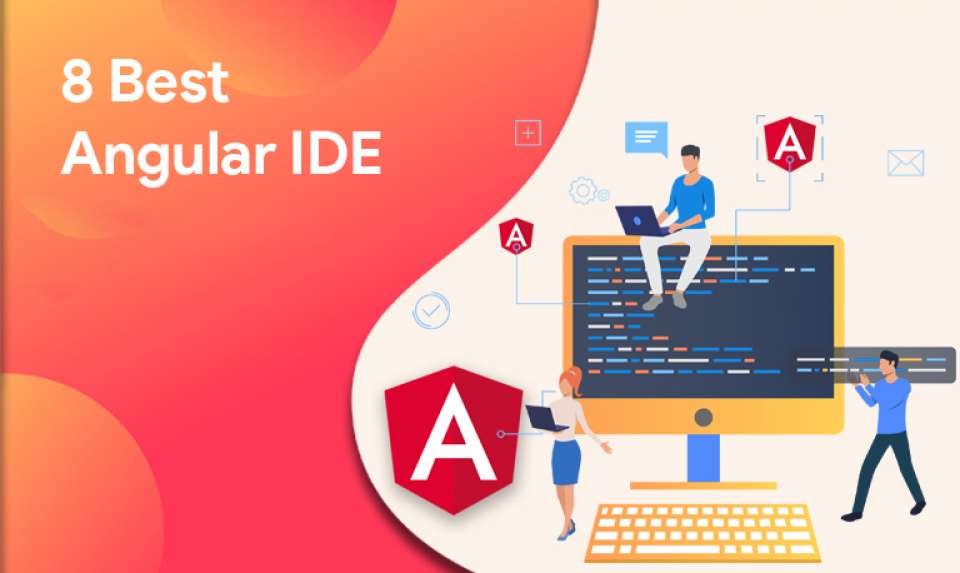 Angular is a JavaScript framework developed by Google in 2009 to help developers with a tool to create next-level mobile and web applications. Angular provides an enriching experience of single-page applications and also created another milestone in web development. If you are looking for a modern web experience with high-quality applications, then angular IDE is your best pick. Using Angular, you can also use JavaScript with HTML and CSS that enables you to create a logical implementation of the application. The framework also lets you integrate with external libraries and is easily expandable.

Integrated Development Environment (IDE), on the other hand, is a program that simplifies the effort required by developers by optimizing the entire development process and help you in writing flawless code. It helps in integrating the software into the system and analyze the working.

Here we have the list of best Angular IDEs that have to be used and can assist you in developing next-generation mobile and web applications.

The best angular IDE & Tools are: Angular IDE is highly used for faster and effective development. It is a stand-alone plugin that can be used with the Eclipse plugin. It is built specifically for Angular, but initially, it was used for tsconfig.json management.

Angular IDE is easy to understand and learn for beginners who want to be Angular experts later.

The benefits of Angular IDE are: Webstorm is a powerful code editor created by IntelliJ developed by Jetbrains and is an excellent selection for coding Angular 2 apps based on TypeScript. With Webstorm, you can start developing Angular 2 components from day one as it provides built-in TypeScript. It also removes your dependency on the third-party plugins as you can easily compile code created in TypeScript using its pure vanilla JavaScript. Microsoft's Visual Studio Code for Windows, OS X, and Linux. It is a source code editor that supports TypeScript, including debugging, intelligent code completion based on variable types, functions, and imported modules. It provides various features, such as snippets and code refactoring. Visual Studio Code offers syntax highlighting and autocomplete with IntelliSense. Sublime Text is a refined choice for a text editor for code, markup. It has a sleek and neat user interface laced with extraordinary features with outstanding performance. It is a highly used code editor nowadays. It is also one of the best angular editors.

The list of benefits of using Sublime Text is: If you are looking for a perfect blend of visual tools in a code editor, then Brackets is your ideal choice. Brackets is a lightweight yet extremely powerful IDE for developing mobile and web applications using Angular. It supports a variety of languages and OS, such as Windows, Mac, and Linux. It is highly used for creative developments.

The benefits of using brackets are:

It is developed by GitHub and is people's choice due to its easy to customizable environment ease of installation. You can install the Atom TypeScript package to improve the experience of using TypeScript using Angular apps. You can also use APM CLI as a built-in package installer.

The functionalities are similar to Sublime as it offers automatic code hints, static type checking, code introspection and can use automated build upon to save and name a few. It also contains a convenient built-in tsconfig.json generator. It is a fantastic text editor that's modern, approachable, yet customizable to enable us to use it productively without ever touching a config file. It is also backed by an active community that contributes to new plugins and more. It has a long list of packages, a built-in package manager, an 8by-default syntax theme, and a built-in package manager.

Benefits of Atom Editor are:

It is an open-source IDE for Angular. You can add the AngularJS Eclipse extension. It is suitable for many other frameworks as well as libraries. It is based on Eclipse and is highly used for JavaScript development. It comes both as a stand-alone version and an Eclipse Plug-in. It also has a fully-integrated Ruby & Rails debugger to use its features to be the most professional-grade product.

Benefits of Aptana Studio are: The benefits of using ALM are:

I hope this curated list of Angular IDEs is helpful for you, and now you can easily use them to create the best applications that are high-performing. These Best IDE for Angular lists are the best in the industry and empowers you to create applications that offer an enriching experience to end-users.

Wanna learn Angular? Angular - The Complete Guide is a great course by udemy that can ease your learning-Angular journey.

Sonali is a technical writer who has a flair towards learning and writing about new and existing technologies. She is an engineer + MBA that makes her a perfect content marketer as she contributed to many sites as well. She is a foodie and loves to cook as well. View all posts by the Author

Is VSCode the best IDE?

Why IntelliJ is the best IDE?

Why is Jetbrains so expensive?

Is Webstorm better than Vscode?

How do I uninstall CodeMix?

Can we run react JS in eclipse?