How to Become a Blockchain Developer in 6 Steps 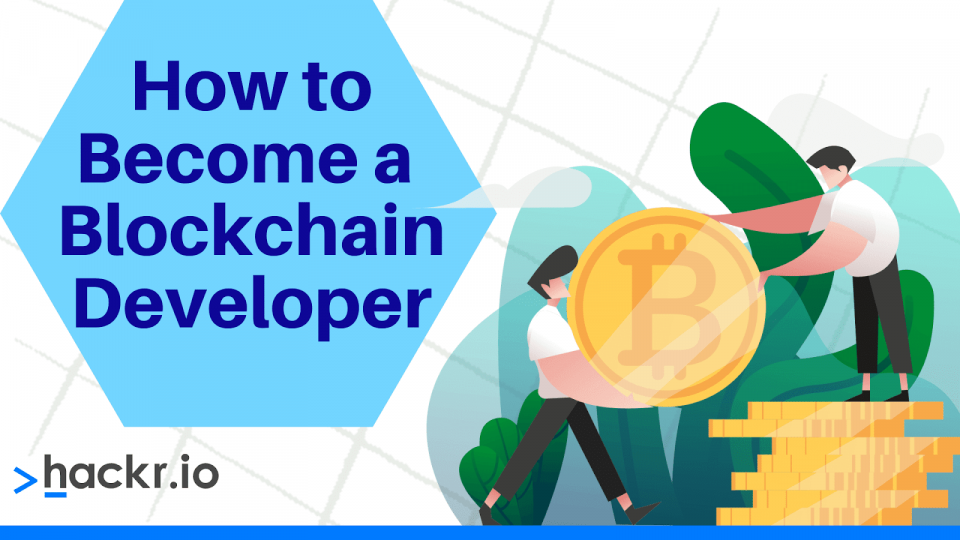 Blockchain technology is all the rage these days, and it’s easy to see why if you know a little bit about the field. The technology has the potential to change the way we interact and exchange value, whether that’s money or in some more intangible form. Billions are being poured into both financial and other use cases, and the industry is booming.

Quite simply, a blockchain is just a chain of blocks that contain data. More specifically, a blockchain is a timestamped series of immutable records of data managed by millions of computers. It is not owned by any single entity and uses cryptographic principles to ensure that the data is honest. Each block is unique, and added to the chain after verification and validation by millions of computers.

Think of a block as a page in a ledger. It records the latest transaction, in a new block after validation. Each block has the address of the previous Block and Current Block.

The first blockchain, which could actually function properly, is the now legendary Bitcoin. This is a cryptocurrency or a decentralized virtual currency, that needs no middlemen or banks to verify the holdings of each user. Banks take the centralized authority role in the financial world, ensuring that everyone’s accounts are accurate. With bitcoin, millions of computers validate that information, the transactions are public, and the information is immutable.

Ethereum took matters a step forward. It facilitated the use of “smart contracts”, a type of program that offers potential much greater than just finance. It has led to a plethora of dapps (decentralized apps), and made the blockchain Turing-complete — that is, it offered more programmability.

What Does a Blockchain Developer Do?

There are quite a few possibilities within blockchain development. You could quite quickly start your own blockchain, but you’re unlikely to find a career this way unless you have your own business idea in mind.

It’s more likely that you’ll find yourself picking up blockchain engineering skills, and then applying those in a role with a startup — or perhaps in a large-scale, well-established firm that has just begun working with the tech.

In other words, you’ll be building and developing on existing blockchain platforms. This may also involve front-end and back-end work, as well as general design tasks.

A blockchain developer may find themselves taking on the following responsibilities:

Why Become a Blockchain Developer?

From a purely career-oriented perspective, the blockchain industry is growing at a remarkable rate, estimated to be worth $137.59 billion by 2030. In the ten months between September 2020 to July 2021, the number of blockchain-related jobs increased by 118% on just one job platform.

Then there’s the fact that you’ll be working on cutting-edge technology, and developing some of the most progressive financial applications that could help the many millions in poverty. The sheer range of applications one could develop is practically limitless, so you may also find yourself wishing to start your own business.

It’s becoming increasingly clear that blockchain technology will have a role to play in several industries, and in companies both new and old. There are opportunities aplenty for those willing to put in the effort, and they could be rewarded handsomely for it. Blockchain developers earn some of the highest annual average salaries in the tech field, often earning between $125,000 and $175,000. Glassdoor currently says that the average salary in the US for a blockchain developer is about $110,000 annually.

What are Some Blockchain Developer Skills? A blockchain developer will have a fair few technical skills in common with more traditional tech roles. These include a strong grounding in a relevant programming language, data structures, and web development.

In addition, they will need to be knowledgeable in cryptography and smart contract development. This is by no means an exhaustive list, but covers most of the essentials.

How to Become a Blockchain Developer

Even if the industry is very nascent, there are clear steps you can take to put yourself in a position to start a career. The following serve as good guiding posts to get on track.

There are several terms in the field that you’ll have to know like the back of your hand. These will be common across almost all roles and projects you work on, so you need to be thorough in this theory.

These concepts include the blockchain itself, consensus mechanisms, miners and stakers (or validators), public and private addresses, smart contracts, wallets, nodes and general crypto-economics.

You needn’t feel overwhelmed. Blockchain courses (and even independent study) can go a long way in grounding you in these ideas.

2. Enroll in a Blockchain Course There are several blockchain courses available on several educational platforms. Duke University offers a specialized course on Defi, while this Udemy course on the basics of blockchain is an excellent starting point. Check out our article on the best crypto and blockchain tutorials available online for more guidance.

This path will offer several clearly defined tasks you must check off to become a blockchain developer — and also give you the opportunity to interact with fellow students.

That’s not to mention the many books (several of which are free) and online resources that you can make use of.

This is where your learning path becomes more interesting — and challenging. Believe it or not, you can actually build a blockchain in under 10 minutes, though this does take some prior coding knowledge.

The programming languages commonly used for blockchain development are C, C++, Solidity, Golang, and Python, though there are many others.

With a basic blockchain out of the way, you can move on to learning how to create smart contracts. This too is fairly easy to implement at the most basic level, though ideas such as resource management and security will come with time and experience.

If you want a quick course on how to code smart contracts, check out CryptoZombies. This teaches how to make smart contracts in Solidity while being fun at the same time, as it helps you make your crypto-collectible game.

As is the case with other programming fields, joining a group of like-minded people will go a long way in your education and career growth. Interact on Github, Reddit forums, and StackExchange, connecting with other developers and improving your skills.

With enough experience and practice, you’ll find yourself in a position to apply for blockchain development-related roles. You have to keep your skills sharp and constantly work on projects, which will act as your portfolio in potential interviews. Do not forget to speak to other developers and the general crypto community. Soon, you’ll have the confidence to apply for a job!

Get Started on Your Blockchain Developer Journey

You will have to put in the time and effort to become a blockchain developer. It won’t happen overnight, but very soon you will be in a position where you feel confident enough to put yourself out there. The point is that you get started. Use the guidance listed above and persevere, and you’ll thank yourself soon enough.

1. How Long Does it Take to Become a Blockchain Developer?

This will depend on individual aptitude, but expect yourself to be coding your own projects in 3 to 6 months. As for getting your first job as a blockchain developer, this may take a minimum of 12 months.

3. Are Blockchain Developers in Demand?

Yes, blockchain developers are very much in demand. The industry is expected to grow to over $100 billion in the years to come. Related positions also doubled between Q3 2020 and mid-2021.

4. What is the Salary of a Blockchain Developer?

The average annual salary of a blockchain developer is between $125,000 and $175,000. Of course, there may be some deviations here, with the highest-profile of jobs offering much more.

Definitely a good read for blockchain development. I liked how you wrapped all the useful points here! Thank you for this.

Thanks for this great guide. Zab Technologies blockchain development company appreciates it.