Unix vs Linux: What is the Difference? 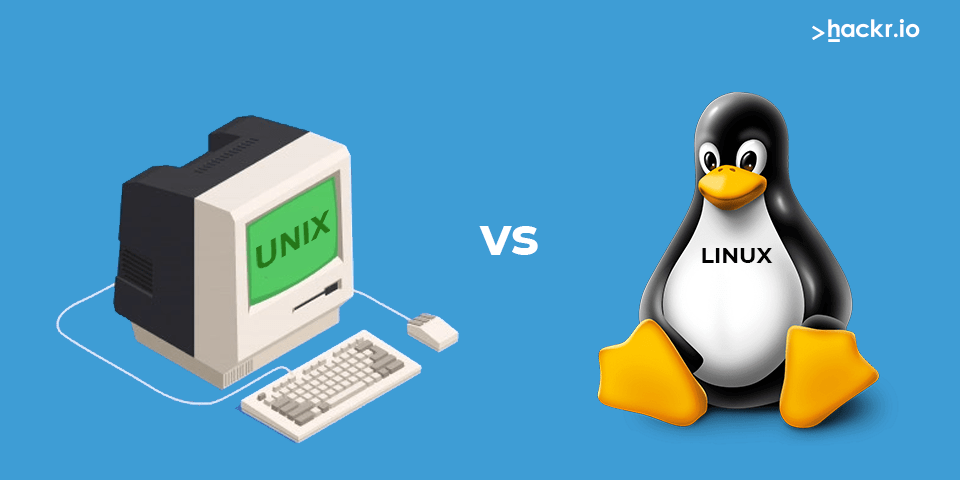 To the untrained eye, Unix and Linux are virtually identical. And that makes sense — Linux was initially based on the Unix operating system. But are Linux and Unix the same? Not quite. The two systems diverged decades ago and since then there have been quite a few changes.

What are the differences between Unix vs Linux?

The first thing you need to understand about the Linux vs Unix question is that Linux isn’t actually an operating system. It is an open-source kernel implemented within a distribution. Unix is a packaged operating system. So, while you can have a computer that runs “Unix,” you can’t have a computer that runs “Linux” — the computer would be running a specific distribution of Linux.

At a Glance: Unix vs Linux

Bell Labs developed the Unix system back in 1965. In 1991, Linus Torvalds released Linux as a Unix-like system. Today, Unix is largely defunct; it’s only used in the biggest of data centers. Meanwhile, Linux has approximately 500 Linux distros (distributors) in active deployment. Most people today will never see a Unix system. A Unix system will primarily reside in industries such as finance, government, or healthcare — areas where it would be prohibitively difficult to change technologies or where security is at a premium.

Both Linux and Unix are highly stable, secure systems. Someone might choose Linux or Unix over a Microsoft Windows OS or macOS because they provide:

So in the question of Unix versus Linux, which is better? Let’s find out.

What Are the Major Differences Between Linux and Unix?

Linux was designed as an open-source version of Unix, which is why Linux and Unix appear so similar. Because Linux has achieved such significant market share, and because it’s based on Unix, it is often called a Unix-based system — as are all Linux derivatives.

But there are major differences between the two systems.

Unix is a proprietary system, whereas Linux is open-source and available to everyone — this is the biggest difference. Being open-source lends Linux many advantages. Linux has been modified to suit many tasks in the form of variants called “distros” or “distributions.” If a problem is uncovered with Linux, it’s often resolved by the community very quickly.

Although Unix is a “packaged” system, it’s important to understand that Unix itself does not distribute systems. Rather, Unix licenses systems that are based on the Unix standards. This is why there are multiple versions of Unix, all of which must meet these standards to acquire licensing.

Users and developers are far more likely to encounter Linux over Unix. Linux is on smartphones, IoT devices, desktop computers, and servers. Meanwhile, Unix is reserved primarily for high-level services, workstations, and mainframes. If someone is working on a Unix server, they’re already extremely aware of it.

Most developers will have at least passing familiarity with Linux. Contrarily, many developers and users will never encounter a Unix machine in the wild.

That being said, there are advantages to understanding the depth of both Linux and Unix machines. Specifically, the proprietary systems that are based on Unix, such as Solaris, can command high salaries and in-demand labor. Unix is a vanishing skillset; every year, there are fewer systems administrators who are experienced in it.

Commands in Linux vs Unix

Linux and Unix operating almost identically in terms of commands. In fact, someone can port over a script from Linux to Unix (or vice versa) and it would very likely work without any modifications. Linux was designed to mimic Unix. Those who operate on Unix can move seamlessly to Linux, as well as from Linux to Unix.

While there are differences in commands, many of these come down to individual distribution packages. Kali Linux, for instance, is designed specifically for security analysis, with dedicated security functions. Other more general-purpose Linux distributions have very similar commands to each other.

In short, most people who know one system really “know” the other, because of the way that Linux was built off the Unix model.

Distros in Linux vs Unix

A major advantage to an open-source solution is that it can be modified as desired. Linux is a general-purpose kernel, which has been implemented in over 500 active operating system distributions.

The three most popular Linux distributions are:

Many distros are actually based on other distros, so you might have multiple versions of Debian, SUSE, or Fedora. The original Linux kernel was just source code distributed on floppy disks, which were then implemented by the user to create a file management system.

It’s not known what the first Linux distribution was — but there are a few good guesses. MCC Interim Linux, Softlanding Linux System, and Yggdrasil Linux/GNU/X were all among the earliest.

It should also be noted that even though Linux is open source, some distributions are commercial.

Unix, on the other hand, is an entirely proprietary system. While there are systems that mimic Unix (such as Minix), there are only a few systems that are truly Unix-based, including:

In the above cases, Unix was licensed out to specific companies (IBM, Sun, and HP) to create Unix systems for their machines. This is one of the major reasons that Unix still has supremacy in large-scale enterprise operations such as server farms.

Linux and Unix distributions can be confusing. The community may refer to Linux or Minix as a “flavor” of Unix, a Unix-based system, or a Unix-like system. In truth, these systems are all inspired by Unix; they are not built on Unix itself.

Similarly, the BSD system is a branch from early Unix specs by the Berkeley Software Distribution team — but it is not Unix.

In other words, Unix‘s market share is vanishingly small, despite its great influence on the computing world. The only reason that Unix appears to be popular is that “Unix-like” operating systems often encompass Linux.

But the Unix Linux difference isn’t trivial; the fact that Unix is a proprietary system is important.

Unix support is frequently provided by resellers that sell Sun, HP, and IBM workstations and servers. There is also the SGI system, which is the IRIX system based on Unix.

Uses of Linux vs Unix

A major difference between Unix and Linux is that Unix is used for large-scale, enterprise servers, whereas Linux is more general-purpose; it’s used for everything from servers to desktop environments.

Linux is frequently used for server environments as well because Linux is far more secure than either Windows or Mac OSx. Linux is also used in most supercomputers, in mobile devices, and for internet services. Meanwhile, though Unix is used in many proprietary server environments, its usage is fading out.

Employment in Linux vs Unix

There are 45,000 jobs on Indeed for a Unix administrator compared to 106,000 jobs for a Linux administrator. It’s a significant difference — but not as much as one might think given that Linux is so much more common. Part of this is likely because Unix and Linux are so frequently conflated.

Most job positions in Linux or Unix will be for systems administration. Systems administrators need to be extremely well-versed in an operating system environment. They have to be able to monitor, maintain, configure, and properly troubleshoot the system.

An expert in either Linux or Unix is not likely to be hurting for work. Both of these systems require administration and architecture, offering optimistic job security and income for aspiring specialists.

You have Linux. If you had Unix, you’d know it. Unix is a proprietary system with very few applications today, mostly for very extensive server arrays. Linux is inspired by Unix, but it’s not directly derived from it. A Linux system looks very much like a Unix system, but it’s not a Unix system itself.

2. Is Mac a Unix or Linux operating system?

Many people believe that Mac is a Linux system or a Unix system, but it’s not. Mac is actually built on Free BSD “Unix,” which is a system that forked off of Unix specifications fairly early on. So, while Mac OS is built on a kernel that is Unix-like, it is not a Unix or Linux system.

3. Does anyone still use Unix?

Many enterprise-grade server banks still use Unix. HP, IBM, and Sun still run their servers on their own proprietary versions of Unix. Unix is still a current and mature system — it just doesn’t have much market share. Because Linux is an open-source system with over 500 distributions, it’s managed to outcompete Unix even in the server industry.

4. Is Ubuntu a Unix-based operating system?

Ubuntu is one of many active Linux distributions. It is based on the Linux kernel, specifically a prior distribution (Debian). It’s one of the most popular Linux distributions today. It could be said that Ubuntu is a Unix-based system because it’s a Linux system and because Linux is Unix-based. But it is not a Unix system; it is only based on Unix.

Should I Learn Linux or Unix?

Unless you’re interested in particularly niche work, it’s better to learn Linux. Most Linux administrators will be able to use Unix and vice versa. If you’re ever in the position to use a Unix system, you’ll likely use a proprietary version of that system anyway, such as operating a Sun Microsystem. In that situation, you’ll need to learn that proprietary version regardless.

When contemplating Unix vs Linux, remember that they serve very different functions as operating systems. Linux remains one of the most popular operating systems throughout the world, with many distributions that are being maintained and even freshly emerging. Meanwhile, Unix is a relatively antiquated, proprietary technology that will likely fade out over time.