SQL vs MySQL: What’s the Difference and Which One to Choose 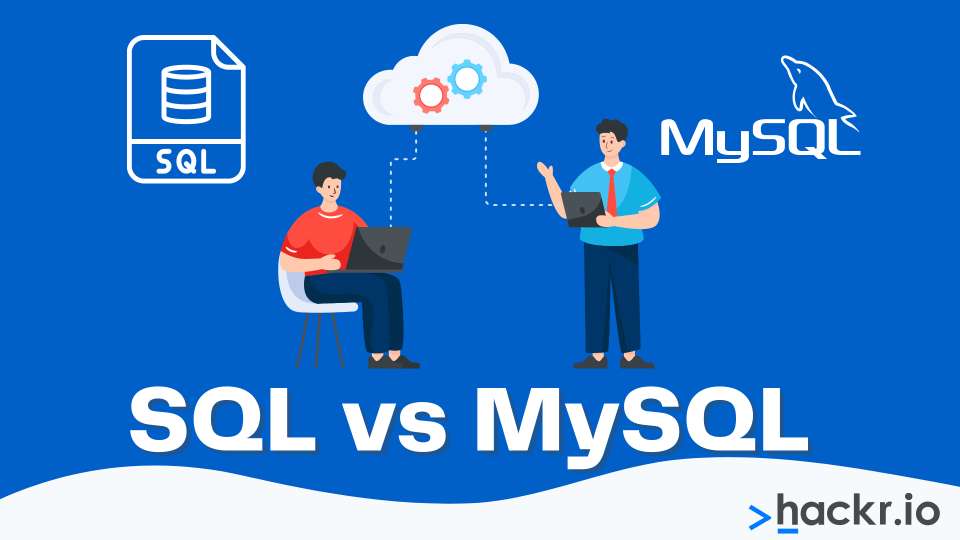 If you’ve ever looked into databases and database management, you’ve likely happened upon references to both SQL and MySQL. But what’s the difference between these two? Which one should you learn and which should you use?

It’s likely you’ll use both. “SQL” refers to Structured Query Language, a type of language that’s used to query databases. MySQL is an implementation of SQL, which uses SQL to manipulate databases. So, when you use MySQL you use SQL—although the inverse isn’t necessarily true. SQL refers to Structured Query Language, which is a set of language standards for the building and maintaining of computer databases. MySQL is one implementation of the SQL language. As such, SQL isn’t the same as MySQL, but MySQL does use SQL.

Another example is Microsoft SQL. This is an alternative to MySQL which also uses the SQL schema, but it’s not MySQL. What is the Difference Between SQL and MySQL?

Why do most people use MySQL and SQL interchangeably? Because MySQL dominates the learning landscape for SQL programs. MySQL is an open-source platform, whereas Microsoft SQL and other competitors are commercial. So, MySQL is used more frequently by beginners because it’s free. It’s also very lightweight, competitive, and stable. Note that MS Access and MongoDB are not SQL databases. MySQL and Microsoft SQL are the most popular SQL databases by far.

When using SQL, you should know that MySQL, Microsoft SQL, and PostgreSQL are all going to operate about the same way. The principle differences are going to be relative to their GUIs and methods of interacting with databases and building databases.

What are SQL and MySQL Used For?

SQL is used for the organization and management of data. With SQL, you can put data into tables, formed with rows and columns, much like a spreadsheet. But unlike a spreadsheet, this data is dynamic and interconnected.

In a spreadsheet, this is the data you have. And you could, perhaps, organize your customers from A to Z or organize them via email. But if you have a database, you could write the following query:

The database will then return:

You could even write this:

And this would return all email addresses from all customers whose names started with John, not just John Doe.

In short, databases fundamentally make it easier to manipulate and find data. JavaScript, PHP, C++, and a multitude of programming languages will interface directly with a MySQL database. But these systems will all use SQL, not the native language, to interact with the database.

Should I Learn SQL or MySQL?

While this is an interesting question, it’s almost always the wrong question. SQL is more a set of standards and specifications for a language than it is an operational language. To use SQL, you need to commit to a SQL platform, such as MySQL or Microsoft SQL. You can’t learn SQL without learning a SQL platform unless you’re just learning the query language itself.

But that doesn’t mean that this isn’t still an important question to ask, because MySQL isn’t the only option available. Popular SQL platforms include Microsoft SQL and PostgreSQL, both of which have been around for a long time and are extremely robust and adaptable. Getting a Microsoft SQL certification can vastly improve someone’s career.

If you’re learning databases for the first time, MySQL is a good choice as it is very popular. It’s used in the LAMP stack, and throughout independent and commercial development. You will find it easier to learn other SQL databases once you know MySQL even if they aren’t exactly the same.

Should I Learn MySQL, Microsoft SQL, or PostgreSQL?

Most people choose MySQL for a few reasons. First, it’s easy to access. It’s also open-source and free. MySQL is so well-supported and well-loved by the development community, it’s already packaged into things like LAMP stacks.

But that doesn’t mean that there aren’t other advantages to other systems.

Is MySQL the Same as SQL Server?

So, MySQL is a SQL Server but not the only one.

Which is Faster, MySQL or SQL Server?

If you’re programming a back-end in PHP, you probably want to use MySQL. But is MySQL good for production? Unfortunately, frequently not.

That being said, most people aren’t going to be designing systems to a scale where it will matter. Microsoft SQL Server might be preferred for large enterprise use cases where it needs to support 10,000 users at a time. But MySQL is still going to be preferred for most web applications because it’s lightweight, easy to use, and (importantly) entirely free to license.

What is NoSQL? [Definition]

If you’ve heard about MySQL, you’ve probably also heard about NoSQL. NoSQL is considered to be a very different type of database than MySQL. MySQL is a relational database; the database is kept in columns and rows, and all the data is connected by keys. For instance, in the following database:

The customer name, email address, and phone number are all associated with the primary key. You can call all this information by referring to the rest of it.

But a NoSQL database is a non-relational database. It’s a database of information that is not held together in a database schema like MySQL. NoSQL databases are used to crunch profoundly large sets of data, many of which may not be interrelated.

NoSQL databases are used for some of the largest sites in the world, but they are substantially different technologies and intended for entirely different use cases. If you should be using a NoSQL database, you already know — because a regular database just won’t work.

Check this Post to get the Difference between NoSQL vs SQL.

Is SQL a valuable skill?

SQL is an incredibly valuable skill. Whether you’re going into mobile application development, cloud development, web development, or on-premise development, there will come a time when you need to know SQL. More importantly, the average SQL Developer's salary is $101,000.

Now, you may not need to know how to architect or even maintain a database. But you should at minimum know how to query a database if you’re going to become a programmer.

The more you know about SQL, the more valuable your knowledge will become. If you know everything about SQL, you’ll be able to really dig into the features of data analysis and data storage. Eventually, you can become a database administrator or architect, both of which command six figure salaries.

How Fast Can You Learn MySQL?

Most people can learn the basics of MySQL within a week. But mastering it takes much longer. If you already understand how databases work, MySQL should be a relative breeze. If you’re coming from another SQL technology like Microsoft SQL or PostgreSQL, you may not need any time; you may be able to hit the ground running with some documentation.

The fastest way to learn MySQL is generally to run a few projects in it. Download MySQL, build a simple customer database and learn how to insert records, modify records, delete records, and query records. You can also take a few classes and read a few SQL tutorials.

There are many MySQL bootcamps that can have you going over the basics of MySQL within a day. But to really retain that knowledge, you probably want to practice. Courses such as the ones on Udemy are a good choice to gain a well-rounded understanding of SQL.

The Bottom Line: MySQL vs SQL

So, is MySQL the same as SQL? No. MySQL is a database platform that uses SQL. SQL is a language designed to make it easier to create, modify, and delete database data.

If you’re looking to become a database administrator, you’re going to have to learn MySQL - which means learning SQL. It will help you organize and manage large volumes of data.

But you may still find yourself choosing between MySQL or SQL because there are also different SQL technologies, such as Microsoft SQL and PostgreSQL. And there are other database types as well, such as NoSQL non-relational databases.

If you want to learn SQL, you can get started today. Not only is it relatively easy to learn, but it’s a very versatile skill to grow into.

1. Is MySQL the same as SQL Server?

No, MySQL is not the same as SQL server. MySQL is an SQL server but it isn’t the only one.

2. What programs use SQL and MySQL?

Yes, MySQL is free and open source. You can download it here.

4. Which SQL should I learn first?

To start with, it’s probably best to use MySQL and try out some queries. There are other choices, but MySQL is so popular that it is worth going into first.