PostgreSQL vs MySQL: Everything You Need to Know in 2023 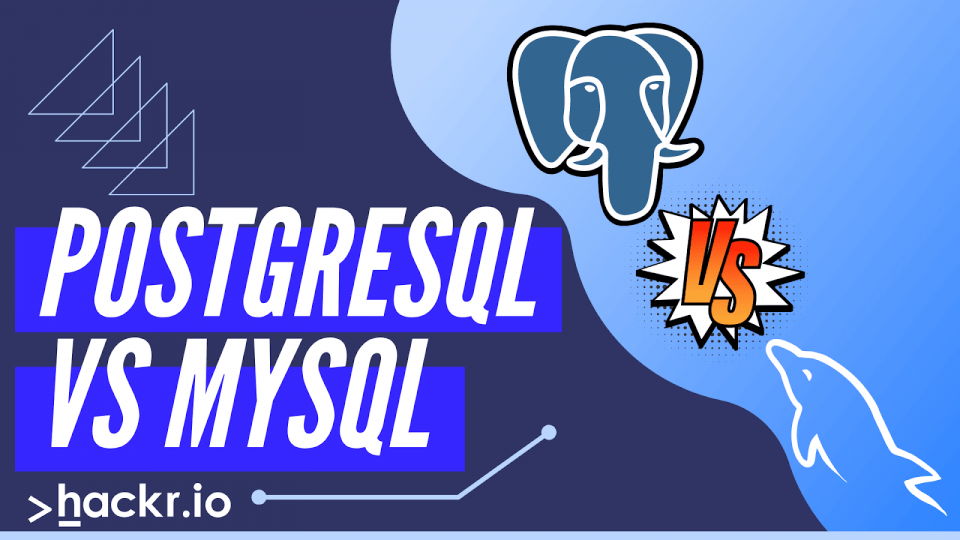 For nearly 40 years, Relational Database Management Systems (RDBMS) have been the go-to option for the storage of information in databases, mainly for personal data, financial information, and manufacturing records, among other things.

The relational model for database management uses the table format for storing data, which makes it different from the standard data management model. The popularity of RDBMS can be attributed to the increase in mission-critical applications over time which requires a robust management system.

Today, all major relational databases use SQL as their query language. Although there is a standard SQL, most database platforms utilize different dialects that may include specific additional functions or a part of standard SQL abilities. In this article, we will introduce you to two major relational database management systems that are well received in the world of application development.

This guide is a PostgreSQL vs MySQL comparison. We will examine the features of these systems and help you choose the right RDBMS for your project. These are MySQL — the most popular and commonly used RDBMS; and PostgreSQL — the most advanced SQL compliant and open-source objective-RDBMS.

For a quick overview of the difference between MySQL and PostgreSQL, here’s a table detailing their features. We go over the two technologies in detail after.

PostgreSQL is considered the most advanced and powerful SQL-compliant and open-source objective-RDBMS.

It has become the first choice for corporations that perform complex and high-volume data operations due to its powerful underlying technology. It uses multi-version concurrency control (MVCC) which allows several writers and readers to work on the system at once. PostgreSQL is extremely capable of handling multiple tasks simultaneously and efficiently. Consequently, it is trusted by business giants such as Apple, Yahoo!, Facebook and Instagram, as well as telecom firms, and financial and government institutions.

PostgreSQL was framed with the goal of being standards-compliant, highly programmable, and extensible. Despite the compelling nature of this DBMS, many third-party tools and libraries make working with PostgreSQL simple.

Other features include high concurrency, ACID compliance (Atomicity, Consistency, Isolation, Durability), object-relation, SQL compliance (for the most part), and support from an active developer community.

The Oracle-backed RDBMS MySQL is the most famous large-scale database server. It is an open-source system that powers a large number of applications and websites online. It is easy to set up and requires minimal fine-tuning to achieve excellent performance levels. Third-party GUI tools such as Adminer, HeidiSQL, MySQL Workbench, and dbForge Studio make MySQL even more straightforward to get started with the database.

There’s also a large pool of MySQL tutorials and resources, which is a boon for beginners just starting with the database.

MySQL is a feature-rich system and supports the majority of the SQL functionality either directly or indirectly, which is expected from an RDBMS. It is highly flexible and reasonably flexible, making it a popular choice for web applications. Some other features include the availability of specific security features, platform independence, ACID compliance, and ease of access to support.

Is PostgreSQL Better than MySQL?

PostgreSQL and MySQL are two of the most commonly used RDBMS, and the decision to choose the correct relational database management system for your project may have a heavy influence on final outcomes.

In a nutshell, however, PostgreSQL is the better choice going into the future. It has more choices and everything MySQL can do, it can too. However, MySQL cannot do everything that PostgreSQL can.

PostgreSQL has features like table partitioning and function overloading, and handles concurrency better.

Is PostgreSQL More Secure than MySQL?

PostgreSQL is more compliant with SQL standards than MySQL. It also has such features as authentication methods, roles for permissions, and no inter-base queries, among other things.

Bear in mind that security faults with database technologies usually lie with the programmer, not the database itself. They are both secure enough for the necessary purposes (MySQL wouldn’t be such a popular choice otherwise).

Is PostgreSQL Easier than MySQL?

On the whole, PostgreSQL is not easier than MySQL in terms of practical application. It has more advanced features, and when it comes to learning PostgreSQL, you’ll have just a bit more than what you would with MySQL.

That said, it is not so much harder that you should find it too difficult to learn. The learning curve difference isn’t particularly substantial.

As we said, even though they have a large pool of overlapping features, it all comes down to your requirements and how you wish to approach the problem ahead of you. The following sections discuss the most salient features of both systems to help you choose between MySQL or PostgreSQL.

The governance model of technology has unique benefits and in the case of MySQL and PostgreSQL showcases a significant difference.

PostgreSQL is developed by the PostgreSQL Global Development group and is available under an open-source license, similar to the MIT license.

The MySQL project has its source code open-sourced to the public under the GNU license, along with multiple proprietary agreements. It is now owned by Oracle Corp. and has to offer various paid versions for commercial use.

The SQL compliance standard is a set of regulations that a database must adhere to while implementing all SQL guidelines and standards. SQL compliance is a significant constraint for companies who wish to work with heterogeneous databases for their project (application).

PostgreSQL is most SQL-compliant as it meets 160 of the 179 core features of the SQL standard, along with a number of optional features.

On the other hand, MySQL is partially SQL-compliant as it does not implement the full SQL standard. However, it does provide many useful non-SQL features, such as the CHECK constraints.

In contrast, MySQL extends support to the open-source FreeBSD OS.

PostgreSQL is written in C and supports a number of programming languages, most prominently C/C++, Delphi, JavaScript, Java, Python, R, Tcl, Go, Lisp, Erlang, and .Net, among others.

The security of a DBMS profoundly impacts its reliability and emerges as one of the top characteristics to look for in a system. Database security points towards the collective use of processes and tools to secure the DBMS or database from threats and attacks from illegitimate sources.

MySQL includes multiple security features, some rather advanced in its quiver. It executes security protocols based on the Access Control Lists (ACL) for user operations such as connections and queries.

Both MySQL and PostgreSQL support all standards and have multiple common access methods, which include JDBC, ODBC and ADO.NET.

JDBC is a database accessing API for Java programming, whereas ODBC is a standard API used to access databases. ADO.NET is a set of APIs that developers use to gain access to data based on XML. The platform’s native C library and streaming APIs can also be used to access PostgreSQL.

Database replication refers to the process of electronic copying of data from one computer or server to another, which allows all users to have access to the same information. A database may utilize numerous techniques to store surplus data across several nodes.

MySQL uses master-master replication, in which each node is a master and has access to update the data.

However, both PostgreSQL and MySQL can perform master-slave replication, in which one node is the master and controls data storage by the other nodes. Other types of implementation can be put into practice in PostgreSQL using third-party extensions.

PostgreSQL is appropriate for use in large systems where data needs to be authenticated and read/write speeds are critical for success. Moreover, it also supports a number of performance enhancers that are only available in proprietary solutions, including concurrency without read locks, SQL server, and Geospatial data support, among many others. In general, PostgreSQL is best suited for systems that require execution of complex queries, or data warehousing and data analysis.

MySQL is the first choice for those web-based projects which require a database merely for data transactions and not anything intricate. It works exceptionally well in Online Analytical Processing (OLAP) and Online Transaction Processing (OLTP) systems where only high read speeds are necessary. However, MySQL will start underperforming once it is stressed with heavy loads or complex queries.

While we discuss where these systems can be employed, the actual performance and speed of an RDBMS can be measured only by evaluating the metrics of possible scenarios as it majorly depends on the requirements and the nature of the project it is being used for.

Community support is significant for the improvement of any database system.

PostgreSQL has a very active community that continuously helps in the improvement of existing features white its inventive committers make every effort to make sure the database remains the most advanced database with the latest features and maximum security.

MySQL also features a large community of followers and contributors, who focus on maintaining existing features, while also adding some new features occasionally.

PostgreSQL or MySQL: Which is Better?

We discussed the most prominent features of the two most extensively used RDBMS, PostgreSQL, and MySQL. Both these systems have some unique features, along with some similarities. Given that there is a sizable list of pros and cons for each, the PostgreSQL vs MySQL decision is one that comes down to what your project demands from an RDBMS.

1. Which is better, PostgreSQL or MySQL?

Many developers today prefer PostgreSQL because of its rapid development. PostgreSQL can do everything that MySQL can, but not the other way around.

2. Is PostgreSQL easier than MySQL?

MySQL is easier to setup and manage than PostgreSQL. The latter is a little more challenging, but not substantially so.

3. Should I learn PostgreSQL or MySQL?

PostgreSQL is likely the best choice in the long run. However, MySQL may be a good place to start if you want something simpler.

4. Which database is best for large data?

PostgreSQL is generally better for large amounts of data.

PostgreSQL slow and complicated by your conclusion, so one question: What???
For small projects it's no matter what of them you choose.

On what versions of MySQL & PostGress did you checked ?

After reading this informative article I got confused at several places to choose best RDBMS database for our website project. As a learner and programmer I want my RDBMS database to flexible (many programming language support), efficient (should perform well during concurrent and multiple thread execution), secure and free (open-source with all the functionality and community support). So, please suggest me the best way to choose one of them. As both the databases are new for me but yes I am aware of SQL so i can work on both. I personally want to work with PostgreSQL as it is a opensource and free but most the web developers suggested me MySQL database to start with. Please help! Thanking you in advance.