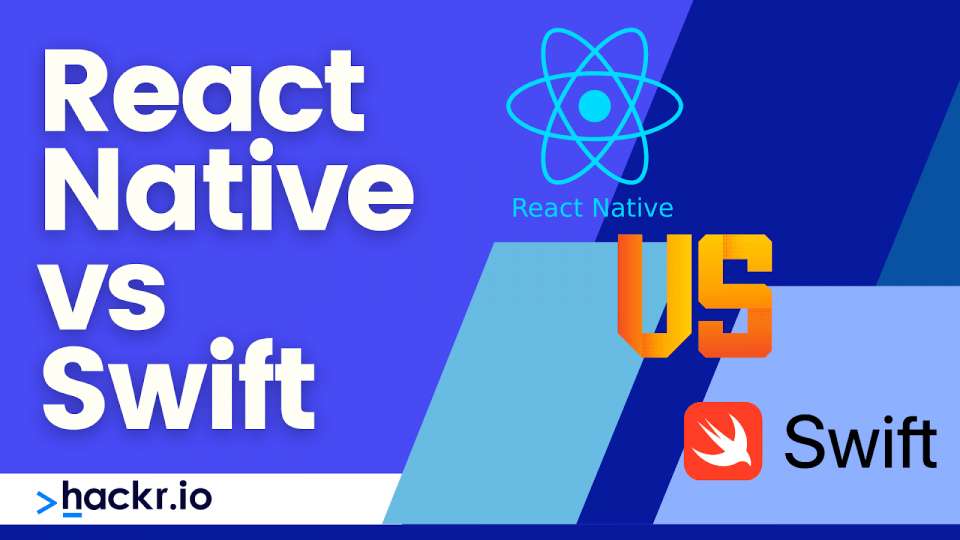 Today, we’re going to look at Swift vs. React Native — two powerful technologies frequently used to build mobile apps. Developers use both Swift and React Native for application development and design, but they aren’t the same.

Swift is foremost a development language for iOS, while React Native is used for cross-platform development.

Here’s what you need to know:

What is React Native? [Definition]

React Native is primarily a method of building interfaces, so it’s heavily views-based. If you wanted to create a “Hello, World!” program in React Native, you would do so as follows:

What is React vs. React Native?

What is Swift? [Defintion]

Swift is Apple’s proprietary programming language for developing iOS applications. Swift can be ported to Android, for instance through Kotlin, but it is intended for native development through the iOS ecosystem. There are applications on the Android store written in Swift, so Swift is not unable to be ported or non-portable; it’s just not as cross-platform as React Native.

Swift shouldn’t be confused with Swift UI, although they are married technologies. However, the contrast between Swift UI and React Native is likely stronger, as Swift UI can be seen as a UI framework in much the same way that React Native is. Swift is the language and Swift UI is a way to create UI code.

In Swift UI, a “Hello, World!” program would look like this:

Learn Swift For Free With This Course! What is Swift vs. Swift UI?

Swift is a programming language developed by Apple for iOS development. Swift UI is the component-based framework that helps to develop applications in Swift by providing an easy framework to develop UIs. Swift/Swift UI are frequently used interchangeably, but it’s important to note that Swift is the programming language, and Swift UI is the UI kit.

What is the Difference Between React Native and Swift?

As you can see, React Native is more thoroughly entrenched in larger enterprises, whereas Swift is used more frequently for dedicated applications, startups, and disruptors. Still, the vast majority of apps on the app store use Swift.

Does React Native use Swift?

React Native uses JavaScript, specifically the React library; it does not use Swift. Occasionally, developers may see references to React Swift. You can implement the React library in Swift, but it doesn’t solve issues with either framework.

Is React Native Easier than Swift?

Why is Swift better than React Native?

There’s no clear winner between React Native or Swift, but many believe that Swift is better for iOS development. When it comes to iOS Swift vs. React native, Swift is inarguably designed and developed for the iOS environment.

Which is Easier to Learn?

Ease of use depends primarily on the background of the programmer. Programmers who already know JavaScript will find React Native easy to learn, although they will need to learn the functions of the framework. Programmers may need to learn both Swift and Swift UI from scratch, but once they have learned both, development should be relatively fast and simple.

Performance: Which is Faster?

Both React Native and Swift have very similar performance qualities. While it might be expected that Swift would operate faster than React Native, especially on iOS, both of them are languages with high levels of abstraction—the developer does not need to juggle a lot of performance or memory management.

A consequence is that there may be technical debt on either side, as both React Native and Swift UI are positioned for fast deployment rather than elegance and scalability. That’s not to say that both can’t perform well—just that it may take some additional effort.

Which is More Versatile?

React Native is absolutely more versatile than Swift. At the same time, there may be situations where iOS development is the only development needed. Many developers still prefer to program for Android, iOS, and Windows platforms separately, rather than trying to develop a single solution that is then ported to each platform.

React Native has a larger and more active community, but the Swift community is also robust and tightly knit. Developers will likely find more materials and support available for React Native, but Swift comes with the full force of Apple behind it.

Both React Native and Swift have active support and a variety of tools, but React Native does have more available overall.

According to ZipRecruiter, a Swift developer can expect to make around $111,000 on average, depending on where they live.

However, ZipRecruiter pegs React Native salaries higher, at $129,000. This discrepancy could be, in part, due to the overall utility of React Native development, as it is a cross-platform development process.

Alternatives to React Native and Swift

When it comes to frameworks, the most popular alternatives to React Native and Swift UI are:

As a mobile developer, you may struggle to choose between React Native vs. Swift.

In fact, both are excellent technologies that will serve you well. Ultimately, know that the best technology for a mobile app developer is the technology that gets the app done.

You should learn React Native if:

You should learn Swift if:

If you’re still not sure, you might need to learn more about mobile application development and design.

1. Is Swift Faster than React Native?

There are two critical factors here: time to deployment and processing time. Many developers find React Native faster in terms of deployment; React Native code can be written and tested quickly and then ported to multiple platforms. Swift code generally takes longer to develop and is only for iOS.

In terms of processing time, you might expect Swift to be faster than React Native (because Swift is designed for the operating system it runs on). But it’s not that simple.

2. Can I Use React Native for iOS Development?

3. Should I Learn Swift or React Native?

6. When Should I Use React Native?

7. When Should I Use Swift?

Use Swift when you want to deploy applications on iOS and put UI/UX development at a premium. In particular, you may want to use Swift when you’re leaning on application functions that are most prevalent or specific to iOS environments.