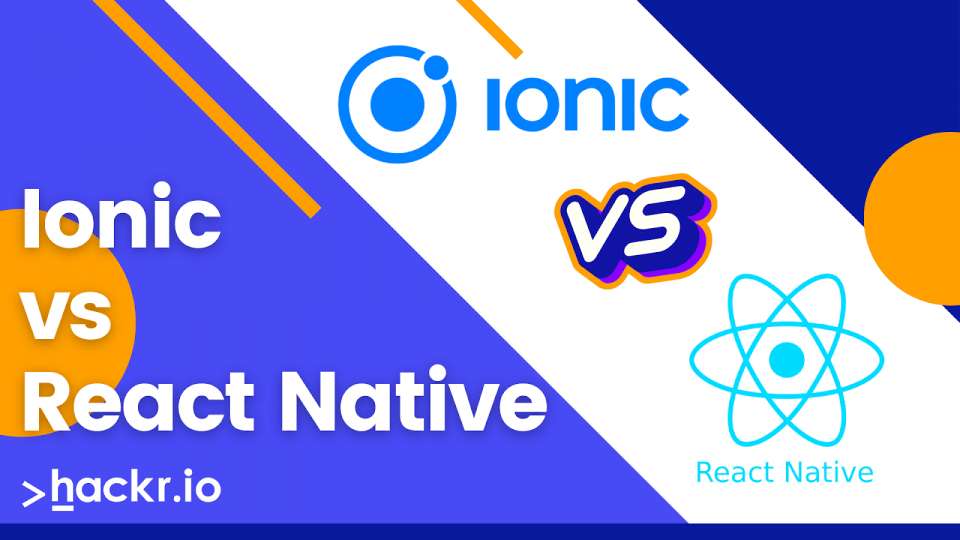 You’re a developer interested in creating beautiful, UI-focused web applications. But you’re having trouble choosing between React Native and the Ionic Framework. Which is the better solution: Ionic vs React Native?

Today we’ll give you a full review of the Ionic framework vs React Native, including Ionic 2 vs React Native performance, versatility, language, and overall suitability.

By the end, you’ll understand the critical differences between the two and why one might be better suited for your project than another. What is Ionic? [Definition]

By leveraging web components, Ionic can create cross-platform applications — applications you can port out to iOS, Android, and Windows. Ionic creates mobile, desktop, and progressive web applications (PWAs), each on a foundation of web development in CSS, HTML5, and SaSS.

Ionic leverages web-based technologies; however, it’s still a framework, meaning it has its own way of modeling views. For example, in Ionic, “Hello, World” would look like this:

Developers who know XML may note this as a classic “markup language” style framework rather than something like JavaScript.

What is a Web App vs a Native App?

A web app uses a web browser (or something similar) as a compiler, a layer between the code and execution. Web apps rely on the browser and browser standards, whereas native apps execute directly on the device.

Notifications are a perfect example. A native mobile app sends notifications throughout the day. Up until recently, web and progressive web applications (a web app with some native features, such as Ionic web apps) felt a lot like mobile apps, but they couldn’t send you notifications without access to the device's notification layer. Today, native apps can send notifications but still need to do it through the browser.

In many ways, an Ionic or web app will look like a React Native app. The difference is similar to launching a cloud-based application through your browser and launching a desktop application from your desktop; it has to do with how the application has been developed, where it lives, and the system functions it can access.

When it comes to Ionic React Native comparisons, neither is necessarily better or worse; rather, they’re best suited for specific applications. The advantage of a PWA is you can actually keep the same code base for your website as for your mobile applications, thereby vastly reducing multi-channel system complexity.

But, of course, the advantage of a native app is that you can use native features.

Furthermore, you install native apps on the device. A React Native app will “live” on a user’s device and remind them to use the app, whereas you can’t install a PWA or Ionic app.

What is React Native? [Definition]

Here’s how you can create a “Hello, World!” program in React Native:

So, your main reasoning for deciding between Ionic vs React comes down to whether you need a native application. React Native provides a full framework for cross-platform native application development, but you can’t use the code base for websites as well (at least, not without a lot of work).

Want to Build a Web App?

What is the Difference Between Ionic and React Native? How Many People Use Ionic React Native?

Ionic vs React Native: Which is Easier?

Ionic may be easier for a simple web application. It uses foundational markup technologies like HTML and CSS, though you will need to know JavaScript, Python, PHP, or other backend programming languages to develop a more complex application.

For a more robust web application, both Ionic and React Native may be equally challenging to learn. The React Native framework runs on JavaScript, which requires you to learn both the framework and JavaScript language.

Both Ionic and React Native are interpreted in real-time rather than compiled. Both platforms emphasize lightning-fast development and deployment, rather than performance, scalability, or processing. The performance depends highly on the application and the amount of time the developer spends on performance optimization.

Which is More Versatile?

More than that, React Native has a larger and more active community. This opens many doors for networking, tools, and resources.

Let’s say that you just want to create a great app. Should you use Ionic or React Native?

If you’re primarily concerned with code quality, React Native is likely the better bet. But if you’re a novice developer or someone who wants to create a simple application very quickly, Ionic could yield better results with its simplicity. However, the picture is different for job openings. As of August 2022, there are approximately 42,700 job listings for React Native development. For Ionic developers, however, only a meager 145 jobs are currently available on ZipRecruiter.

You can make a lot of money as an Ionic developer, but there are substantially fewer available opportunities.

Alternatives to Ionic and React Native

Let’s say you want to develop a progressive web application but you don’t want to use Ionic. You can use several popular alternatives like:

On the other hand, you might want to create a native mobile application instead. There are also a few high-profile alternatives for React Native:

All these development kits, UI kits, and frameworks will make it easier to create a native mobile application, although not all are cross-platform.

Before you make the choice between Ionic vs React Native, carefully consider the differences between a progressive web application/web application and a native mobile application.

Progressive web applications are accessed through a browser with some native mobile features. You can “install” them on a device as a shortcut, but not in the same way a native mobile app is.

Native web apps are web applications installed directly on a device that can access all native mobile features (with appropriate permissions). They are installed on the user’s device and live on that device.

You should learn Ionic if:

You should learn React Native if:

There are good reasons for either solution. As a developer, you may even want to learn both. Anyone with a solid understanding of HTML, CSS, and JavaScript can use Ionic’s framework. On the other hand, React Native requires in-depth knowledge of JavaScript — so, it’s really a matter of learning about each framework’s conventions.

You’re up to speed on React Native and Ionic, but you have more to learn before launching your mobile app development career.

1. Which is Better: Ionic or React Native?

2. Why Choose React Native Over Ionic?

Ionic is absolutely still relevant and still used in 2022, but its popularity is waning. Mobile app development is booming, but PWAs and other web applications aren’t being used as frequently.

You may have heard React Native is best for small, simple applications. That can be confusing, given Facebook first developed it. But the reality is that React Native is still a development framework for cross-platform development. For very extensive applications, it may be easier to develop natively in the platform itself (such as Windows, Android, or iOS).

React vs React Native: What are the Differences?
Read More