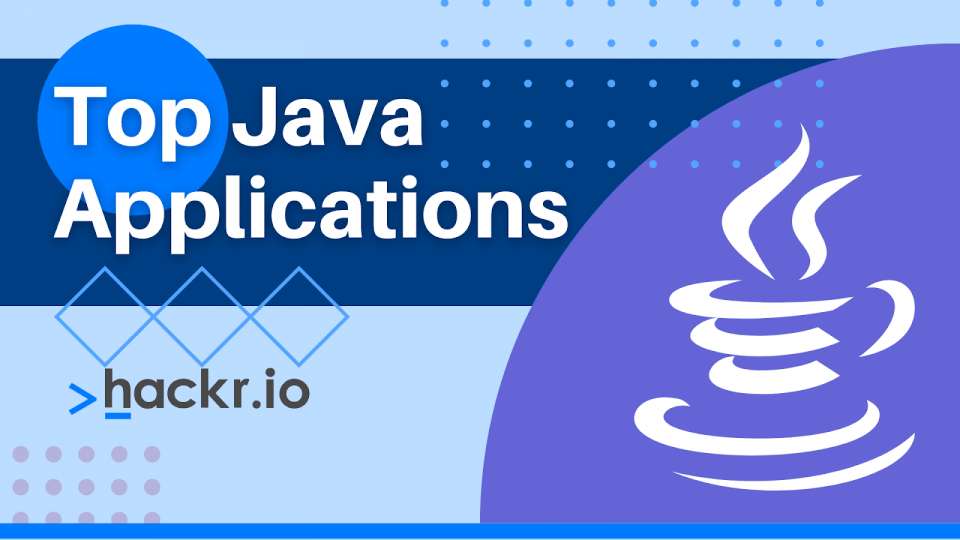 Java was first developed in 1995 and has remained one of the most popular programming languages globally. There was a time when you couldn’t visit a website without seeing a Java applet — today, developers mostly use Java for desktop, server-side, and mobile applications.

Of course, that doesn’t mean Java is the best tool for every problem. Java is a popular language for many applications but less popular for others. Let's look at different types of Java applications, what Java does well, and what Java could do better.

What are the Applications of Java?

Java is a cross-platform, general-purpose language. It's highly portable, well-known, and well-supported. Due to its lengthy history and active community, Java is frequently the first language programmers learn. When Java was first released, developers primarily used it to create embedded web applications.

While Java can seem complex, it's not difficult to learn — with the right teacher. Learning Java through tutorials and projects will let you dig deeper into programming and its structures.

Scala, Ruby, and C# are just a handful of languages influenced by Java. You’ll have an easier time learning these and other languages with Java.

Desktop applications like Microsoft Word or Adobe Photoshop are installed on your computer. Of course, most programs today are cloud-based SaaS solutions—but you probably still occasionally download software suites like Slack.

Historically, desktop applications have been more frequently written in C++ than Java. But programmers often favor Java for its portability, meaning it’s ideal for cross-platform applications. Out-of-the-box, Java has some memory leak issues and security problems. But skilled hands can make it extremely efficient and secure.

Examples of common desktop applications include:

Embedded systems are small, standalone computers that run a single program or application. These might include devices like switches, routers, and TVs. Many Android devices (particularly older ones) also fall into this category. But embedded systems can even be used for essential services, like medical devices.

Examples of embedded systems include:

Newer developers are more likely to use Python or a JavaScript framework for rapid deployment, but newer doesn't necessarily mean better. Java is still a strong candidate for mobile application development due to its community's strength and its ecosystem's diversity.

Examples of mobile applications include:

In addition to its portability, Java's object-oriented design makes it a good fit for developing big data applications. But you might run into some performance issues when using Java for big data projects.

As a new developer, you'll hear mixed things about Java's performance and scalability. The reality is that Java is highly scalable and high-performance, but the issue is that it's difficult for a programmer who isn't experienced to create scalable code. The more experience a programmer has, the better their code will perform. Proper memory management, for instance, will reduce the potential for memory leaks–while incorrect memory management can destroy a platform. Java offers near complete freedom, which is a double-edged sword.

Examples of big data applications include:

While the web is one application of Java — generally, for server-side development — it is slightly defunct. Java is a lightweight, extensible, and portable language. But it’s not a fast language to develop programs.

Languages like Python deploy code much faster than Java, making it an attractive choice since developers prioritize taking code to market as quickly as possible. But developers still use Java for web applications, especially when they need a fast, efficient, and scalable language.

Examples of web applications include:

Python is currently the preferred language for machine learning and artificial intelligence. But just as Java is used for big data, it's also being used for the development of AI. Java has low abstraction; it allows access to machine-level operations. So, while sloppy coding can potentially lead to technical debt, elegant code will be lightweight and scalable… if a bit lengthy.

Java may not be the ideal language for new programmers who want to develop artificial intelligence. But conversely, programmers who already excel in Java shouldn't feel they need to learn a new language to develop AI. Apache Jena, PowerLoom, and Eye are just a few Java frameworks for AI development.

Examples of Java AI applications include:

In addition to its use on the web, Java also sees significant usage on the cloud.

Cloud services differ from web services as they are distributed along multiple computers.

For all the reasons discussed above, Java is particularly scalable and portable — which lends itself well to the fast-paced world of enterprise applications. Java programmers are in high demand to build and maintain these cloud services.

Examples of Java enterprise applications include:

What are the most popular Java platforms? It's easier to understand Java's uses when looking at applications of Java in the real world. Well, you probably don't boot up the Mars Rover whenever you restart your computer. But the Mars Rover is undoubtedly significant to the course of human history. You can even run a simulated model of the Mars Rover using the Java-designed interface. The Mars Rover how useful Java is in embedded systems.

Most of today’s major platforms, like Google, YouTube, Facebook, and Amazon, use Java in their server-side applications. However, it's worth noting that they frequently use other languages, too—for instance, eBay uses Java, JavaScript, and Scala. Speaking of eBay…

Yes, the world's greatest online auction house uses Java in its backend. Java is frequently used for backend development and data management, while languages like JacaScript are used for user interface design and development. eBay is an excellent example of a large, scalable, and efficient site developed with Java.

Minecraft is arguably the most popular game today—regarding raw market saturation. One single developer painstakingly programmed Minecraft in Java and released it in 2009, though developers continually developed the game into the 2020s. A major downside highlighted to Java is that it requires a lot of code to get things done, but a practiced Java programmer can develop nearly anything from scratch.

Next time you're binge-watching a show, think about the extraordinary technologies involved. Netflix stores and moves tremendous volumes of data, while also analyzing customer behavior. And it does it on a backend that's been all developed in Java and Python.

Catch a ride with Java. Java is frequently used in Android development and with the right software development kit, Java can be ported directly to Android and iOS. Though native iOS programmers will usually use a language like Swift, it's easy to develop in Java and compile cross-platform. Uber is one of many popular mobile apps developed in Java.

Due to the sheer freedom, portability, and extensibility if Java, Java is also used frequently for software development programs. Eclipse IDE and NetBeans are examples of two popular IDEs (development environments) for programming. And while you could write Java on an IDE written in Java, Eclipse IDE and NetBeans also both support other languages.

Twitter switched from Rails to Java for performance—indicating that, once again, Java can provide for exceptional resource management in the right hands. Twitter has to manage a high volume of data very quickly—but at least it’s largely organized data. Rails is a server-side framework developed by MIT, and, like many frameworks, it makes the development process faster (sometimes at the expense of live performance).

Spotify may have more under the hood than you think. It isn’t just a music archive, it’s also a music suggestion engine. It takes note of all your behaviors (not just likes and dislikes, but how often and how frequently you listen), to offer music that’s likely to keep you listening. On its backend (powered by Java), it also has to track royalty payments, subscriptions, and advertising.

No language is inherently “highly secure,” but the granular control that developers have over Java makes it one of the languages with the most security discipline. Java is used heavily throughout the financial services industry, including the wildly popular app CashApp. You can keep money in your CashApp wallet, send it to friends (and strangers, although that’s less advisable), and even buy cryptocurrency.

An end-to-end, encrypted communications channel, Signal shows off Java’s versatility, portability, and security. Signal makes it possible for individuals to connect even if they lose access to the greater internet, through peer-to-peer sharing and a connected IoT.

Access a 3D model of the world from any satellite with NASA’s WorldWind project. WorldWind is an open-source globe that provides topography and imagery across the world to developers, complete with interactive visualizations. WorldWind can see anything that satellites can see, including traffic and weather.

Should You Learn Java?

Java is still one of the job market’s most desirable languages. According to Payscale, the average Java developer makes close to $80,000. Of course, that's almost identical to the average Python developer.

Python is probably the most popular programming language today, but Java is close behind. It's easy to learn Python after you learn Java, but the opposite isn’t the case. Interestingly, Python is seen as a more “modern” language even though it was released first. In large part, that’s just because Python supports rapid deployment and fewer lines of code.

Java vs Python: A Quick Head-to-Head

Ultimately, Java and Python are great learning languages. Java is more likely to give you granular control over systems and build your skills as a programmer.

In contrast, Python leads to faster deployment and lends itself to smaller development pipelines.

You can learn Java through certification courses and by tackling some popular Java projects.

Which Software is Used for Java?

Java applications are everywhere. For every one of the Java uses listed above, there are dozens of others. A developer can create a Java-based application for anything from an IoT device to a website.

So, when should you use Java?

Use Java when you need a language that is:

But don't use Java if you:

Want to learn more about Java?

It's a great time to become a Java developer. There are over 80,000 jobs open for Java developers on Indeed. Start with bootcamps, certifications, and programming projects, and you'll be well on your way.

1. How is Java Useful in Our Daily Life?

Many of the computing systems we encounter every day run Java. From smart televisions to banking systems, Java is everywhere — it’s been one of the most popular programming languages worldwide for decades. For programmers, Java is a great language to start with — while it's complicated, it also requires a lot of discipline.

2. What Industries Use Java?

3. What is Java Best Suited for?