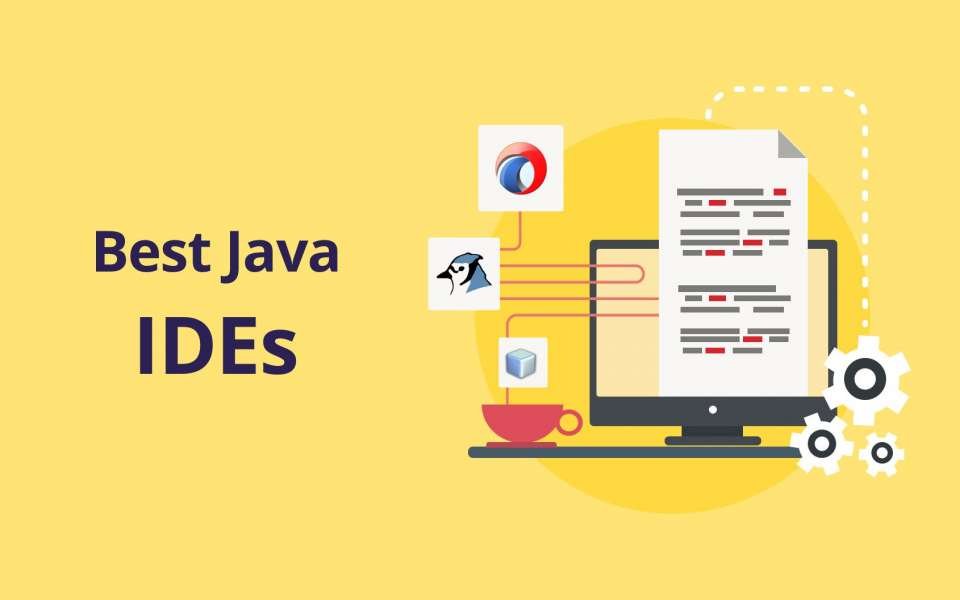 A Java IDE can make all the difference when it comes to making your Java development experience smoother. Fortunately, there is a multitude of free Java IDEs.

We list the top 10 best Java IDEs here, along with their pros and cons. Let’s get into it!

A good Java IDE will contain a lot of features, including such things as code refactoring and an in-built debugger. The advanced ones will have syntax highlighting and code completion, which can really quicken development. The best Java IDE finds a balance between features and being lightweight and performative, as we will see below. A dedicated Java IDE, Eclipse was released in 2001, and is available on Linux, Mac, Solaris, and Windows. It is considered by many to be the best IDE for Java. It is also available as a cloud edition.

There are an array of plugins available on the Eclipse Marketplace, which adds to the functionality. Eclipse also comes with a custom compiler. For Java programmers looking to develop specific functionality for Eclipse, a PDE (Plugin Development Environment) is available. The IDE also flaunts powerful tools for charting, modeling, reporting, and testing. Released in 2001, IntelliJ IDEA is another one of the big three Java IDEs. It is available in 2 different editions, an Apache 2 Licensed community edition, and a proprietary commercial edition. IntelliJ IDEA boasts cross-language refactoring and data flow analysis features.

This IDE for Java has features that ease the life of a Java developer, such as chain completion, language injection, smart completion, and static member completion. In addition to supporting Java and a whole host of Java frameworks, IntelliJ IDEA also provides support for other JVM-based programming languages, such as Kotlin. The last of the big three Java IDEs is NetBeans. NetBeans is the official IDE for Java 8 and is available on Linux, Mac, Solaris, and Windows. In addition to being available for a variety of platforms, NetBeans also comes in a feature-limited OS-independent version. Each novel version of NetBeans boasts an improved and reworked Java editor.

By highlighting Java code syntactically and semantically, it makes it easier for Java programmers to build custom software apps. In-built tools in NetBeans make it possible to refactor and write bug-free code.

Lastly, NetBeans offers a GUI Builder and has extensions available for developing in C, C++, HTML5, JavaScript, PHP, and other programming languages. Though mainly designed for education, BlueJ is apt for small-scale software development. Despite being developed as a ready-to-go IDE for beginners, many Java veterans choose this IDE.

The primary screen of BlueJ displays the class structure of the application. It also allows for interactively creating and testing objects. Other powerful Java application development features offered by BlueJ include creating dynamic objects. JDeveloper is a free IDE by Oracle that offers a lot of features and visual development tools. JDeveloper covers the entire development lifecycle, such as coding, designing, debugging, optimization, profiling, and deploying. Maintained by the JavaPLT group at Rice University, DrJava is a lightweight Java Integrated Development Environment. It is specifically developed for beginners and students. Though not as powerful as other big names for Java development, DrJava has a remarkably clutter-free interface.

Other than offering a JUnit test facility, DrJava allows you to evaluate Java code from a console interactively. Like its contemporaries, DrJava assists programmers with features like go to line and find/replace. It also offers auto-completion, automatic indentation, brace matching, commenting, and syntax coloring. Additionally, DrJava integrates into Eclipse via a plugin. jGRASP is undoubtedly one of the best lightweight IDEs for Java. Besides an integrated debugger and a workbench for Java developers, jGRASP also features generation of complexity profile graphs and UML class diagrams. Created and maintained by Genuitec, MyEclipse is a proprietary IDE built on top of the Eclipse platform. The wide variety of tools available in MyEclipse can be used for both Java app development as well as web development. However, it is not free, and the standard and most basic license costs $35.

In addition to providing support for Angular, HTML, JavaScript, and TypeScript, MyEclipse allows support for application server connectors and database connectors. Other notable features of the IDE include Maven project management, spring tooling, and WebSphere connectors. Available completely free of cost, Xcode is an IDE developed for macOS by Apple. This IDE comes with a multitude of software development tools for iOS, macOS, tvOS, and watchOS. This is certainly the top IDE for Java development on Apple.

Some of the essential highlights of Xcode are an inbuilt debugger, GUI builder, and profile autocomplete. In addition to Java, Xcode provides support for AppleScript, C, C++, Objective-C, Objective-C++, Python, Ruby, and Swift. Codenvy is a commercial Java IDE built on top of Eclipse Che. There are 3 variants of the IDE that Java programmers can choose from: developer, enterprise, and team. It costs $10 per month for a single developer.

It is a cloud-based and on-demand developer workspace. In addition to writing Java code using the browser-based editor offered by Codenvy, Java programmers can benefit from powerful features like code completion, refactoring, and syntax highlighting.

In addition to Java, Codenvy provides support for a plethora of interpreted as well as compiled programming languages; this includes C++, C#, JavaScript, and PHP.

Get Started with Any One of These Java IDE

As we can see, there are a plethora of IDEs available for Java developers, ranging from fully-featured commercial software to free and open-source ones. Ultimately, the best software for Java programming depends on your current project and personal preference. Which IDE is best for Java according to you? Let us know in the comments.

And if you are new to Java, the Java Programming Masterclass is a great place to start your Java programming journey. After all, Java is still considered one of the leading programming languages to learn and earn in 2023.

What IDE Should I Use for Java?

Pick any IDE that you think you might feel comfortable with. This may take some experimentation with various IDEs, but you should soon be able to settle on one that you like.

What is the Best Free Java IDE?

What is the Easiest Java IDE for Beginners?

DrJava is thought of by some as the best Java editor for beginners. However, the others are also easy to get up to speed with, so don’t think you can’t try any of the other IDEs on the list.

Do You Need an IDE for Java?

No, you don’t need an IDE for Java, but it helps massively. A Java IDE provides several features that will make your development process much easier.

Microsoft Visual Studio is the best!

great information thank u its work for me

You put IntelliJ IDEA on 6th place? that alone tells that this list is useless.

Is there an IDE for Java that can work on a chromebook?

I'm running IntelliJ Ultimate Edition on mine in a Linux container.

I personally use Intellij IDEA. It's quite good. The UI and all the other features like Version Control integration and code completion along with auto-imports are quite amazing. Above all, the community edition is free. Give it a try.

You should have included CoreIDE as well. I think it is the best IDE for full stack Java and JavaScript developers.

can u tell how to import java library in Xcode when I use external build system?

Why don't you have Gitpod in your list? I think its awesome!